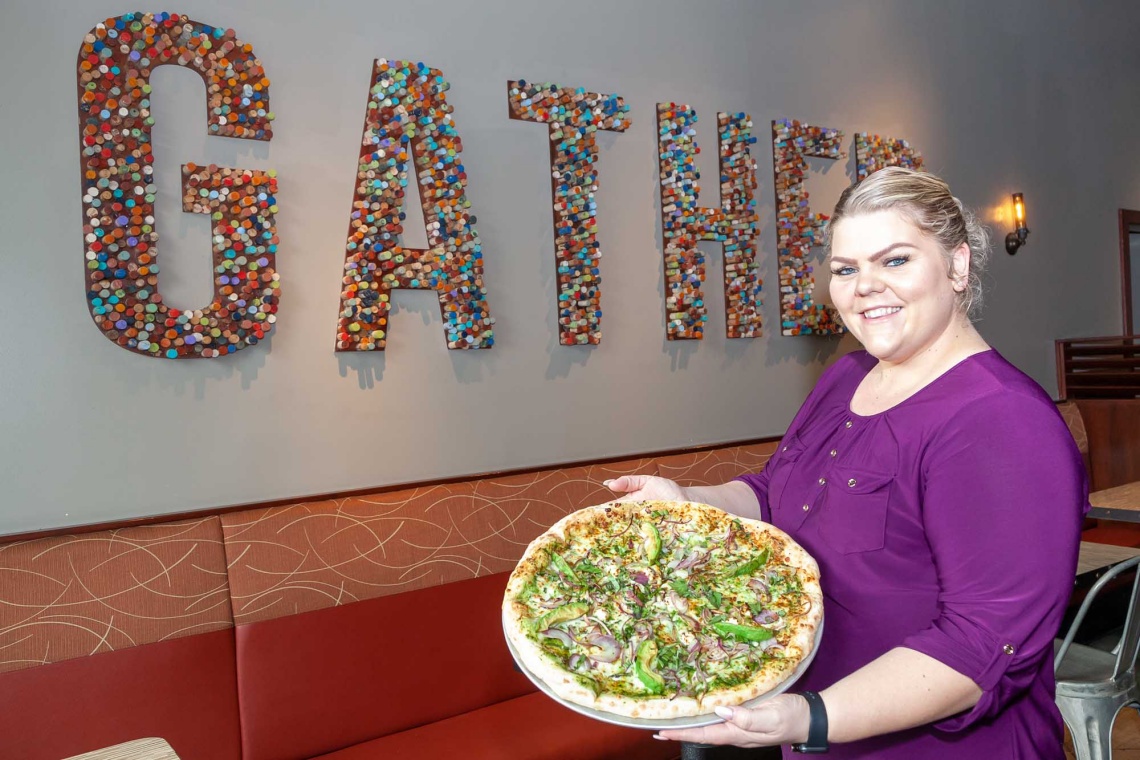 The Peninsula has a variety of amenities, one of which is not a variety of moderately priced family restaurants. That’s not just a problem for parents, because sometimes you want something quick and satisfying that doesn’t require changing into something nice before leaving the house. Stonefire Grill, just down the hill in Rolling Hills Plaza, is a popular option.

As the name suggests, the Stonefire Grill specializes in roasted meat, and I had been told that they do a good job of it for a modestly priced restaurant. This is rare because good quality meat that will cook up tender and flavorful is not cheap, and people who have the skills to grill it consistently also usually charge a premium.

They’ve decided to save money elsewhere in the operation by adopting the quick serve format where you order at the counter and pay, then find a table and are served. This format involves less staff and works well at a fast food place with a standard menu – you already know what’s on the burger or pastrami sandwich, and how to customize it to your liking. That system breaks down when you have a large menu with unusual choices, and the architecture of this restaurant makes it worse. The menu is hard to see until you’re almost at the register, though there are paper menus available to study in line. You’re likely to arrive at the counter with no idea what you want or with questions about various items, and with a growing line behind you. Once you figure out your food order, you’ll see the wine and beer list for the first time – it isn’t on the menu board or the food menus, and we had to ask for it. If you haven’t eaten there before and don’t know the portion sizes, you’ll leave the counter having no idea whether you have over or under-ordered.

After you find a table and get your own flatware and water – nobody brings them – you have a short time to wonder what’s going to happen next. One of the advantages of this system is that orders can be processed very quickly. The disadvantage is that if you like to enjoy your salads or appetizers before your meals, too bad, because everything arrives as soon as it’s ready. In our case the first to hit the table were the salad, house-made potato chips, some breadsticks, and a bowl of beans that was a side dish with one of the dinners.

The hit was the “cartwheel salad” of greens with radishes, garbanzos, olives, beets, and tortilla chips in a cilantro vinaigrette. It had been made fresh to order – we could tell because the tortilla chips were crisp, and we were asked when we ordered whether anything should be left out. The flavor balance was good, the dressing with just a hint of cilantro tying everything together nicely. I should note that a “small” salad is a decent starter for at least two people, because portions here are generous.

The other items were decent but not outstanding, the potato chips crisp and served with a spicy dip, the beans mild with a tiny hint of chili kick. The table was fairly full with these items, and we joked about what would happen if we hadn’t finished everything when the main courses arrived. They showed up seconds later, and our server performed a remarkable feat of fitting everything somewhere on the table. We can only guess that he was the Tetris champ of his grade school class, and complimented him on his skill. The servers here must be given credit – they do their very best to make a bad system work.

Our main courses were the pork ribs, chicken, and tri-tip, plus a vegetarian pizza. The pizza was unusually good for one with a pre-made crust. A well-made fresh baked crust can have a crisp base and moist interior that just can’t be achieved otherwise, but if you’re not a pizza snob you will be perfectly happy with this one. The mix of purple onion, zucchini, and mushrooms was served without a tomato sauce but with the right amount of mozzarella, focusing the flavor on the well-balanced flavors of the veggies themselves.

And now to the main attraction here: the meats themselves. The chicken was moist and had a more pronounced smokiness than the other two meats, and that added character to the somewhat bland and sweet barbecue sauce that it had been coated with. The ribs didn’t fare quite as well. They had been slow-baked overnight and grill finished, which can result in a moist interior and caramelized sauce under the right circumstances. The caramelization of the sugar in the sauce adds to the depth of flavor, but that hadn’t happened with the ribs. We asked if a spicier sauce was available and were offered either sriracha or Mexican hot sauce, neither of which is something I would put on ribs. We didn’t finish them and I took some home to strip the meat and add it to a stir-fry.

The star of the meats was the tri-tip, which is available with a light garlic pepper or the barbecue sauce and is served topped with gorgonzola butter. We chose the garlic pepper and were glad we did. The meat was remarkably tender and better than I’ve had at some much pricier steakhouses, and given that a half pound ran only 16 bucks it was a bargain.

Some local and commercial beers are on tap here, as is a cider that my wife ordered, but the rest at the table decided to share a bottle of Toad Hollow Cabernet, which was well-suited to the tri-tip in particular. We might have ordered another glass or two when that ran out, but didn’t want to walk back to the front of the restaurant and go through the line again.

To finish we ordered carrot cake and were surprised by how good it was. It was very light and moist and had a lot of raisins and carrot shavings that added natural sweetness to the sugar in the frosting. The ground walnut topping was a nice touch that rounded out the flavors and added some texture. I had been wary of ordering this because carrot cakes are often one-dimensional – this was one I would have been proud to make.

Dinner for four with a bottle of wine, some cider, and a soft drink ran $125, and we took some leftovers home. Would I recommend the Stonefire Grill? If you’re in a hurry and want a better than average fast meal, yes. Forget ordering a starter that isn’t a salad because you won’t have time to enjoy it, but get that carrot cake for dessert, and you’ll play to their strengths. “Fast casual” is a restaurant category, this place is both, and sometimes that’s just what you want.