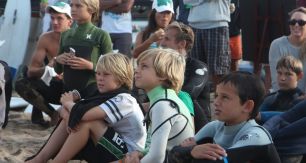 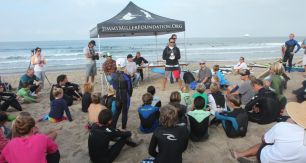 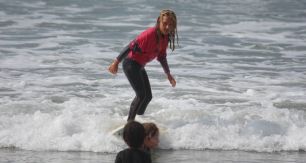 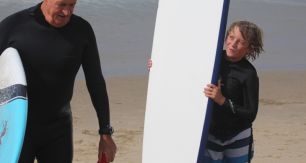 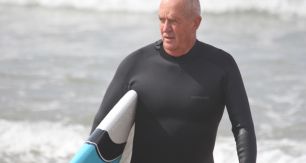 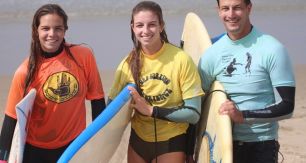 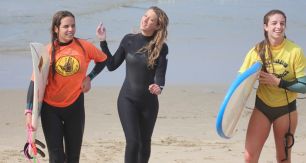 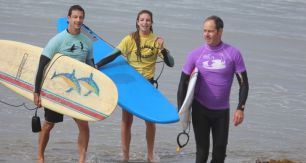 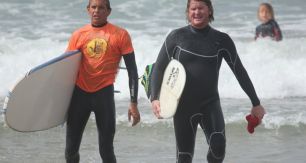 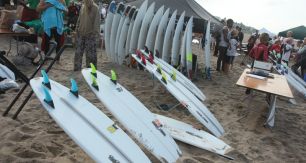 Groms soaking it in.  To see more Jimmy Miller Fiesta photos click on PHOTOS link at top of page.

A team of groms, led by stand-out performances from the brothers grom Zachary, 13, and Jake Rosenberg, 9, won the 9th Annual Fresh Brothers Jimmy Miller Fiesta contest at El Porto on Sunday. Zachary Rosenberg’s performance in the grom-size surf earned him the Sector 9 Best Performance by a Grom award.

Nearly 200 surfers competed in the event, which raised over $25,000. The sold out contest matched surfers of all ages and both sexes on five-member teams. Except for the “A” surfers, competitors had their choice of three dozen demo boards brought to the contest by JC Surfboards’ Steve Meidroth. The “A” surfers rode boards selected by the opposing team — usually a delaminated soft top or a 5-foot Spyder thruster.

The surf was small but clean in the morning, not so good mid day, and glassy again in the afternoon for the finals, where the groms knocked off a team of mostly open division men. Spyder Surf’s Dickie O’Reilly was the groms final victim, along with teammates Chris Maloney, grom Connor Taylor, 6, Jake Johnson and Mark Silva. The contest was Silva’s 800th consecutive day of surfing.

At last year’s Jimmy Miller Surf Fiesta, Bud Light committed to donating 25 cents to the Jimmy Miller Memorial Foundation for every case sold in the South Bay over the following 12 months.

At the awards party, hosted by Veranda’s and catered by Silvio’s Brazilian BBQ, Bud Light presented JMMF with a check for $20,000.

The premier of Peff Eick’s music video recounting his experience returning from Vietnam and his volunteer work with JMMF elicited an emotional, standing ovation.

Dozens of local surf business contributed auction items. An online auction, which continues through Nov. 1 include a four night Eco Adventure at the Ritz Carlton Kapalua on Maui for two; Astronaut training for four at the Kennedy Space Center; and three nights at Whistler. All include airfare.

JMMF offers ocean therapy, including surf lessons to the United States Marine Corps. Wounded Warrior Battalion-West at CampPendleton, as well as to veterans at the West LA Veterans Hospital and youth from several care and shelter facilities for abused and foster children.

For more about the Jimmy Miller Foundation, visit JimmyMillerFoundation.org. ER 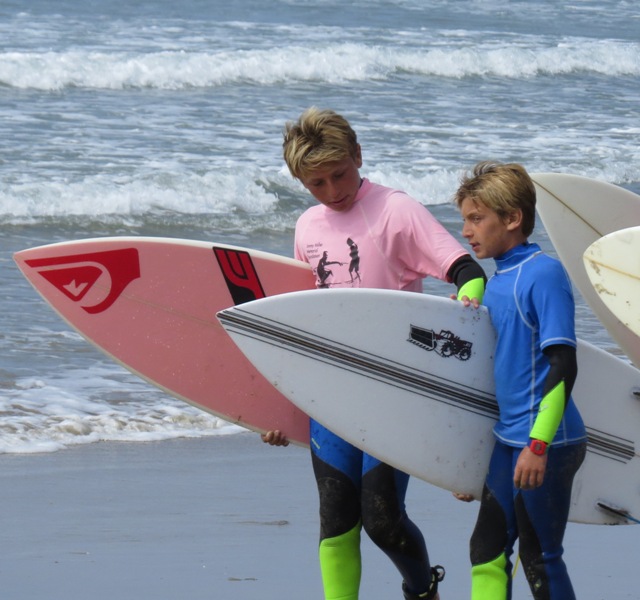 Brothers grom Zachary and Jake Rosenberg are heading up a fundraiser for the Jimmy Miller Memorial Foundation. Photo by Aaron Rosenberg

Manhattan Beach Middle School seventh grader Zachary Rosenberg is organizing a Wave O’Rama to raise funds for the Jimmy Miller Foundation. Fellow surfers are asked to pledge money for every wave they catch in a single hour.