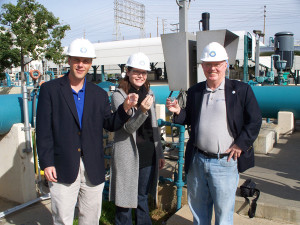 It wasn’t the first time I’d raised a glass (or plastic cup) in a toast. It was the first time I’d toasted with a hard hat on my head and water in my glass that had been in someone’s toilet just a few days ago. Fortunately, I couldn’t really tell the difference between it and the tap water I used to swallow my vitamins an hour earlier.

No, it wasn’t some twisted dream or an audition for a reality show. I was standing at the West Basin Municipal Water District’s (WBMWD) El Segundo purification plant with three employees whose mission in life is to ensure the fresh water that flows from our faucets continues to flow.
As times get tougher, we’re learning not to take for granted things like municipal services that were always just “there.” In good times and bad, for as long as anyone can remember, when you turn on your tap, turn on your garden hose or do a load of laundry, clean water comes from some unknown source to get the job done. The past, in this case, is not an accurate predictor of the future.
Last April, the WBMWD board voted to cut the supply of water it sells to the agencies who sell it to us by as much as 15 percent. Residents and businesses didn’t find less water coming out of their faucets. But if they were paying close attention, they may have noticed some sharp increases in their monthly bills.
If you boiled down the complex issues surrounding delivery of fresh water to Southern California to one overriding problem it would be dependence. We depend on water from the Sacremento-San Joaquin Bay Delta and the Colorado River for 66 percent of our water.
Higher water prices are certainly coming but cost isn’t the real issue. Both of those sources could dry up completely for different reasons.

“The water hub of this state can break down tomorrow,” said Ron Wildermuth, WBMWD Public and Governmental Affairs Manager. “If there’s an earthquake or flood in the bay-delta, we pull salt water in from San Francisco Bay, it mixes with fertilizers and pesticides that have mixed with the water in that area for 100 years, the water would be of such poor quality if we moved it south our conventional treatment plants couldn’t clean it. That can happen tomorrow.” He said. That interruption of 30 percent of our supply could last 2, 3 or more years.

“We’ve lost half of our Colorado River supply due to growth in the other states (that have rights to the water). What scares us is that there are three climate studies that predict the Colorado River Basin will be the next 1930s Dust Bowl and that Lake Mead will never be full again.” Wildermuth said.
We produce some of our own water, which comes from wells drilled into the ground but that supply needs constant management. One of the uses of the recycled toilet water I drank is to create an underground barrier between the ocean water that percolates into the land and the ground water we drink. Without it, our ground water would become unusable.

WBMWD plans to move the imported water dependency gauge from its current 66 percent all the way down to 33 percent in 10 short years. They haven’t found a way to increase rainfall. Instead, WBMWD plans to promote water conservation and develop a brand new source of fresh water, the Pacific Ocean.
Redondo Beach and the South Bay will play a leading role in WBMWD’s plans to desalinate large quantities of ocean water and convert it into potable (drinking) water. They’ve begun a two year pilot project that will operate out of the old concrete pump house at the SEALab on Harbor Drive across from the AES Power Plant.
When it’s fully operational, the plant will produce more than 500,000 gallons of fresh water per day, all of which will be dumped back into the ocean along with the salt and other substances that the desalination processes removes. It seems like a waste but they need to prove their technology beyond any doubt before we’re allowed to drink ocean water or water that was in the ocean just a little while ago.
Which brings me back to the toilet water I drank. I hate to break this news, but some of the water we import contains recycled waste water. I’ll bet you can’t tell the difference either.