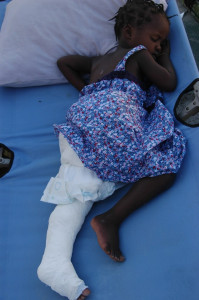 Daphne, a four-year-old orphan at Maison de Lumiere orphanage in Haiti, is recovering from a broken leg suffered in this month’s earthquake. Photo by Troy Livesay

Maison de Lumiere, an orphanage in Haiti founded by a Redondo Beach family, has persevered in the aftermath of the massive earthquake that struck the nation two weeks ago. But the orphanage, which cares for 50 children, has had to endure severe challenges, including supply shortages, structural damages, and the loss of all the schools its children attended.

Last Wednesday, the orphanage was raided by armed thugs. A group of 20 men reportedly barged into the Maison de Lumiere guest house, intent on stealing supplies. They were held off until Haitian police arrived and scared the men away.

Bill Manassero, the former Redondo Beach resident who with his wife Susette founded the orphanage five years ago, said the incident was very unsettling.

“It was a band of thugs, likely escapees from the prison that collapsed, not indicative of most Haitians at all,” Manassero said. “They were testing out the local situation to see how easy they could get away with their robberies.”

The incident received national attention. A report on CNN, Manassero said, gave the impression that a mob had overtaken the orphanage. Manassero, communicating via Skype on Tuesday morning, said he wanted people in the United States to better understand how Haiti has responded to the earthquake.

“The biggest misconception is regarding the Haitian people in general,” Manassero said. “The media is quick to say ‘They are hungry and dangerous.’  This is so far from the truth it isn’t funny. These are the most gracious, polite people I have ever met.”

Nonetheless, the attempted robbery made the orphanage’s vulnerability apparent. The earthquake destroyed one of the compound’s outer walls and exposed the little community to the surrounding chaos. The Manasseros, along with King’s Harbor Church in Redondo, reached out to Congresswoman Jane Harman’s office in hopes of having a few of the 7,000 U.S. Marines currently in Haiti guard the orphanage. Two Marines subsequently visited but were unable to stay.

“They said they were positioned nearby at a local park, which was moderately reassuring,” said Chris Cannon, pastor at King’s Harbor. “The problem is it’s not near enough to prevent something. They are only near enough to react.”

The Manasseros subsequently moved all the children – including their own five children – further up the mountain, a more out-of-the-way location. They camped there for a few days while they tried to make security arrangements.

“Private security, at this point, seems next to impossible,” Manassero said.

Cannon said he was disappointed that arrangements could not be made for U.S. military protection.

“You’ve got 7,000 marines there, so I’d like to think we could have a few of these guys stationed at the orphanage, where they need security,” Cannon said. “I’m sure the need is everywhere. We’ve got 50 kids I feel responsible for – I want better security opportunities, but I’m sure that is how everyone feels.”

King’s Harbor is sending relief teams in the next few weeks. The teams are looking for more volunteers, particularly people with certain abilities – teachers with a French and Creole language background (as well as an English language teacher for the Manasseros’ children), a medical doctor or nurse with emergency room or disaster experience, masons to help rebuild their walls, possibly counselors to help with the children’s post-traumatic stress, and people with security expertise.

“If I could get some retired Navy SEALs, or special forces guys to spend a few weeks that would help,” Manassero said. “Maybe they could help train our Haitian guys.”

“One of the critical pieces for Bill and Susette is the kids are beginning to get restless,” Cannon said. “To keep their attention from wandering…we are probably putting teachers high on the list, in concert with the walls being rebuilt, because that is so important to establish security.”

A fundraising effort organized by Lucas and Alicia Simmons, members of the King’s Harbor community, and the website eDivvy.com, has raised $181,000. Several fundraisers have also been organized locally, including a dinner and auction this week at the Riviera Grill, music and live auctions at the Lighthouse Café, on Saturday, and a special concert next Monday night at Saint Rocke.

The Manasseros and their orphans came down from the mountain and back to the orphanage Monday. In order to establish some sense of normalcy, they organized a soccer tournament, and were hoping this week to take the kids someplace for ice cream. The children slept inside for only the second time since the quake – they have been too terrified to be indoors. The only other time they tried was last Tuesday, when a 6.1 temblor roiled the country.

Manassero also stressed how important it would be to get the kids back in school in some manner – many of the children had been going to private schools, one of the crucial steps in Maison de Lumiere’s vision of creating a young generation of young, educated, and hopeful leaders.

This goal is being put to the test.

“The schools aren’t likely to open for a while, so that’s why we are looking for teachers,” Manassero said. “If they don’t open, we’ll open our own.”

Manaserro and his family have no intentions of abandoning Haiti.

“We are more committed than ever to stick it out for the long term,” he said. “Haiti will likely take decades to recover – and recover to what?  This can be a major turning point for this country, a rebirth of sorts.  Our children and the generations to come have a great opportunity to reshape their country.  Practical things like building buildings with building codes, computerizing government (many vital records were destroyed) along with buildings…”

“From the spiritual standpoint, those of faith can help set a new standard,” he added. “Not allowing the corruption of the past to prevail – the corruption that resulted in many of the buildings that collapsed, because of cutting corners and pocketing allocated funds. For our mission, we are more committed than ever to work hard to build up a new generation in Haiti that will say ‘never forget’ and use this experience to help change the future.” ER