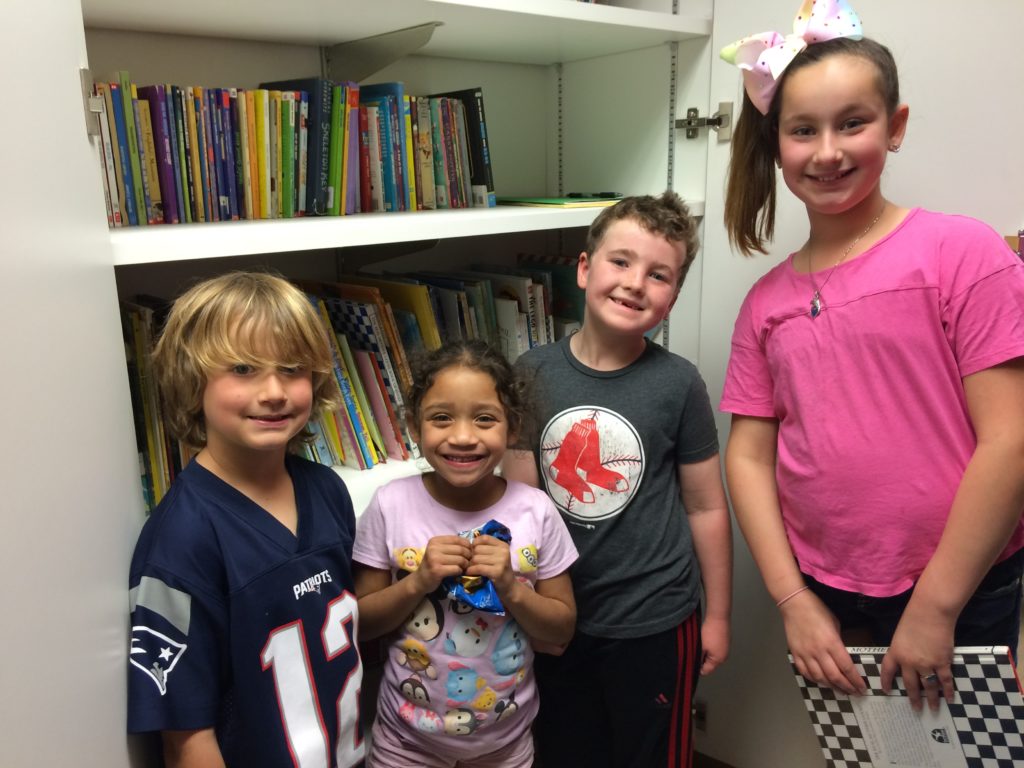 The kids queued up to see what all was available. They perused the selection and made their choice.(Fairy tales and books about princesses were especially in demand.) And no one came away empty handed.

Such was the scene at a Long Beach nonprofit last month, when students and parents from Hermosa Beach schools delivered nearly 6,000 gently used books. It was a record year for the Hermosa View and Valley Parent Teach Organization’s Community Service Book Drive, and an important tool in fighting one of the region’s most overlooked public health challenges: literacy.

The books went to The Children’s Clinic: Serving Children and Their Families, a community health center system serving the greater Long Beach and South Bay area. The organization, founded in 1939, serves children and adults of all ages at 11 sites, including a mobile clinic for the homeless and four on school campuses.

Dr. Elisa Nicholas, a pediatrician and the CEO of the Children’s Clinic who also happens to be a Hermosa resident, said that a book drive complements the clinic’s core mission.

“We have always looked at all the influences on health and wellbeing of children and families,” Nicholas said. “Not just medical care, but eating well, physical activity, and certainly literacy and doing well in school.”

The broad view of health outcomes, youth literacy and parent involvement is well supported in scientific literature. A highly influential study from Betty Hart and Todd Risley, two child psychologists at the University of Kansas, tracked the amount of language that young children were exposed to in families of varying socio-economic status. With parent consent, the researchers recorded and analyzed more than a 1,200 hours of conversation over a period of two-and-a-half years.

The results were dramatic: Hart and Risley concluded that by age three, a child from a well-off family could be expected to have heard 30 million more words than a child from a poor family. And rather than diminishing once school began, these differences continued to grow throughout the child’s life, with significant consequences.

As Hart and Risley were conducting their research, Boston pediatricians Robert Needlman and Barry Zuckerman developed Reach Out and Read, which aims to improve child literacy by using pediatricians to encourage parents to read to their children. In 1999, the Children’s Clinic became the first clinic in Los Angeles County to establish a Reach Out and Read program.

“Pediatricians are the one group that actually sees children at a really young age; preschool is not till four. That contact is so important. We have the opportunity to really change lives of children,” Nicholas said.

Hermosa schools got involved with the clinic not long after the establishment of the Reach Out and Read program. Nicholas, whose kids went to View and Valley, began noticing how many books she and her fellow Hermosa moms had. She helped the schools set up up book donation bins, and brought students and parents to tour the clinic. Since the program began, she estimates that Hermosa schools have donated 60,000 gently used books to the clinic.

This year, View and Valley combined to donate 5,802 books, an increase of more than 2,000 over 2016. Autumn Stephens, president of HVPTO, said that involvement with the program

Was “another part of raising a complete human being.” She noted that some middle-schoolers at Valley are able to get needed community service credit through the program. And assisting people served by the clinic, who are overwhelmingly part of the working poor, fulfills the mission of a district blessed with wealth.

“The point of our PTO is to enrich the community, not just the school, and not just right here in Hermosa. We’re so fortunate to have a lot of resources here. It’s important reach out to other places,” Stephens said.

Among the Hermosa families to have embraced the program are the Shotts. They have gone down to Long Beach to help distribute books each of the last three years. They said that being at the Children’s Clinic proved an especially meaningful, because they got to see the effects of the charitable work. Courtney Shott, mother Reece and Parker, said the experience revealed both the depth of need, and how simple donations could make a big difference in the receiving children’s lives.

“What struck me were the kids who asked, so politely, if they could have two books,” Courtney said.

“There were tons of kids waiting to see the books,” Reece said. “They just said, “Thank you, thank you!’”

In the ongoing work of the clinic, books are as central to pediatric visits as stethoscopes and thermometers. Children at the clinic receive a new book for each pediatric visit between birth and age five. The parents, for their part, get a “prescription” with instructions on reading to their children every day.

Nicholas said that the emphasis is on getting parents involved in their child’s intellectual development. Many adults, at all socioeconomic levels, do not understand the importance of verbally interacting with their children before the child can read and write. This is compounded by the fact that many of the parents the clinic serves grew up in homes with few books, and were not read to in their own childhood. But regardless of the form it takes, this “cuddle factor” of interaction, as Nicholas calls it, is one of the most important parts of a child’s development.

“Just hearing the sound of their parents’ voice is important,” she said. “At six months, they’re probably going to put the book in their mouth. That’s okay. Eventually, they’ll learn to turn the pages.”