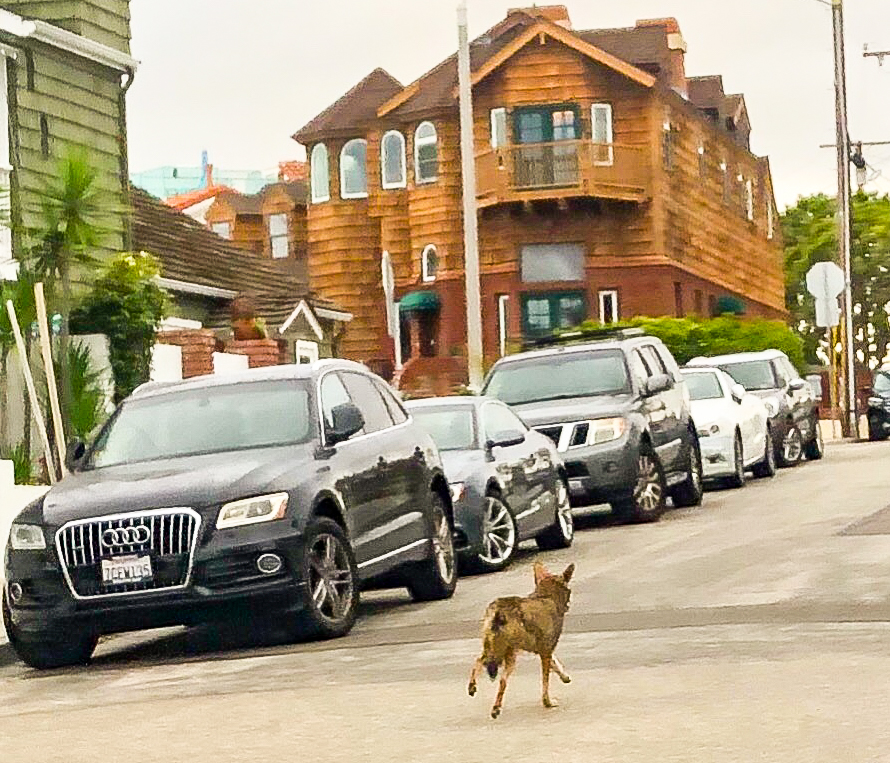 Last month, Hermosa resident Rob Blair was out for an early morning run when he spotted what he believed to be a coyote. He managed to scare the animal off, but the experience felt eerie.

“I have lived in Hermosa for 30 years and typically run this time of the morning and this is the only time I have ever felt threatened by an animal. Strange times,” Blair wrote on NextDoor.

Reports of coyote sightings in the South Bay have ticked up in the past few months. And while the arrival of mysterious wildlife has unnerved some residents, including some reporting feeling threatened or even being chased, scientists say that coyotes are a here-to-stay part of the Southern California biosphere, even one as heavily urbanized as the South Bay.

“The places that they like are places that have good food, good shelter and access to water. But almost everywhere has that. Your own backyard has that,” said Niamh Quinn, a human-wildlife interactions advisor with the South Coast Research and Extension Center in Irvine. “Coyotes are everywhere. I would predict that most of us in Southern California are not that far from an urban coyote right now.”

The “strange times” that Blair alluded to in his posting include not just the rise in coyote sightings, but a global pandemic as well. Throughout April, when much of the state was under a shelter-in-place order, it was common to link the increase in people staying indoors with emboldened fauna. “Coyotes, falcons and deer and other wildlife are reclaiming L.A. territory as humans stay at home,” the Los Angeles Times proclaimed.

Quinn’s research group, which has worked with cities throughout Southern California, including some in the South Bay, was in the midst of a coyote “collaring” project, which would help them understand how the animals move through the region, when the pandemic hit. They’ve collared five coyotes of the 20 they hope to trace. Eventually, the project may help scientists understand whether more coyotes are moving into urban areas. But Quinn agreed that people are seeing more wildlife does not mean wildlife is actually more abundant. Quinn compared it to “buying a new car and all of a sudden the roads seem more crowded.”

Amelia Viera, an environmental scientist with the state Department of Fish and Wildlife, said the state had not received reports of increases in the presence of coyotes in urban areas of Southern California. But she said there are “many factors” why people might perceive an increase.

“One possibility is that more people are home more often than they were several months ago. People who would normally be at work Monday through Friday, 8 a.m. to 5 p.m., are now at home to witness what goes on during the day,” Viera wrote in an email. “We have seen a similar situation with the increase of home security cameras in society. Home security cameras allow people to see what they normally wouldn’t see while sleeping or away from their home.” 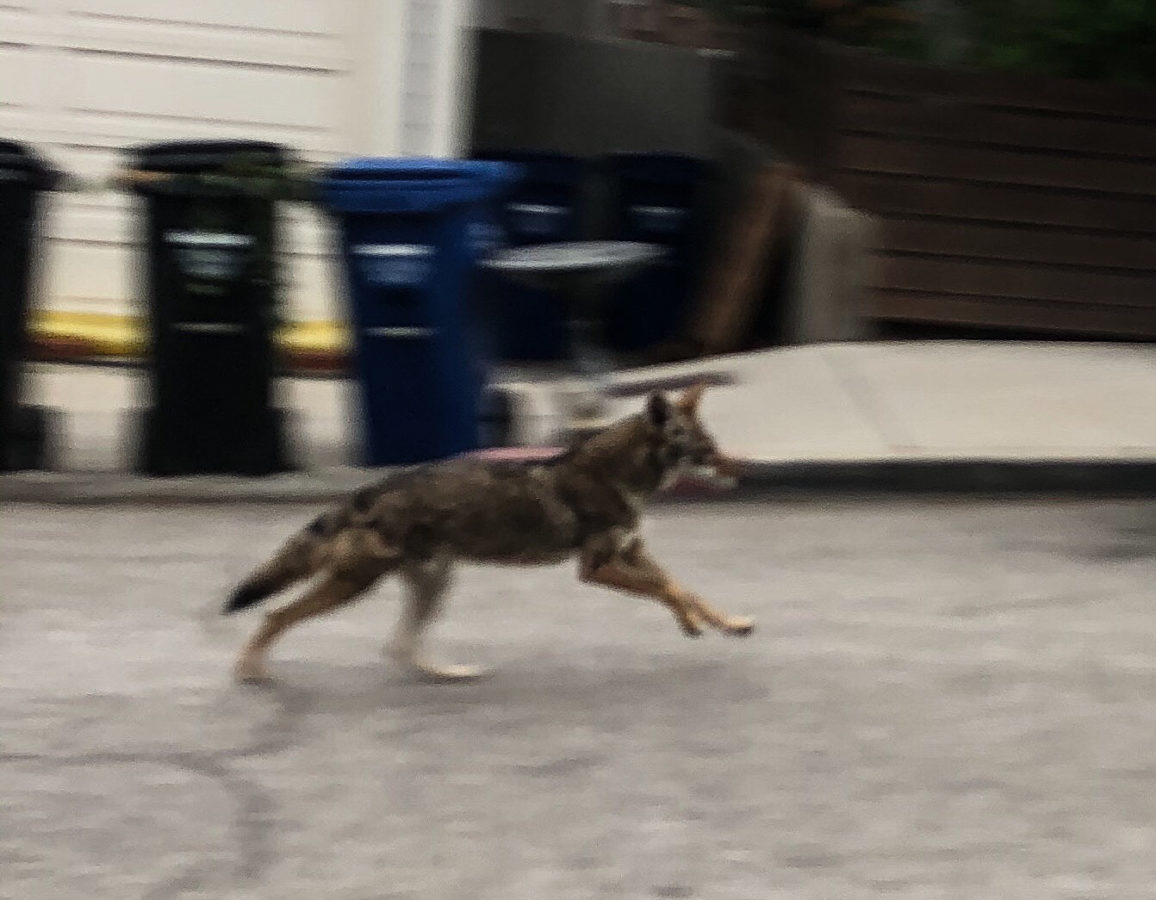 Scientists say, despite an uptick in sightings, it’s unlikely that the South Bay’s coyote population has ballooned.

Sightings, however, have continued even as more businesses reopen and more people return to work. Scientists interviewed for this story said almost all sightings these days are reported only on social media and never make it into official tallies, and urged people who do to report them to local government. (The scientists also all pronounced “coyote” so that it rhymed with “denote.”) Justin Brown, a biologist with the national park service who works out of the Santa Monica Mountains, agreed that it was unlikely that Southern California was seeing a surge in its urban coyote population.

“People are seeing coyotes more. But I think the truth is that coyotes are always there. Sometimes there’s a little bump up, maybe because of a food source that’s present and they’re seen more. But they’re present across the landscape,” Brown said.

Reports on social media offer conflicting coyote accounts. Some have described an injured animal, others a fleet one. Some describe a lone coyote, others a pair or a pack. And some posters on NextDoor claimed to have seen a coyote weighing as much as 70 pounds. Brown said that was impossible, and that the average weight was around 25 pounds. He said the strangeness of coyotes may make people perceive them to be bigger than they are.

“That’s wolf size. An Eastern wolf is around 75 pounds. Coyotes just don’t hit that,” Brown said. “A huge coyote would be 45 pounds.”

Regardless of size, the animals have made for some scary encounters. Early on the morning of June 1, Hermosa resident Courtney Lingle reported running into a coyote while walking her dalmatian. Lingle described the coyote as approaching her dog and standing “nose to nose.”

“I yelled and he backed off and we backed away enough to sprint up the street and he followed,” Lingle wrote on NextDoor. She last saw the coyote heading east toward Loma Drive.

May and June are considered an “active” time of year for coyotes, Quinn said, usually associated with breeding. Right now, as well as the months of October and November, when younger coyotes begin to disperse from packs, are traditionally the times of year when reports of coyote sightings are at their highest. This is because their need for food is highest at these times, which makes it more likely that they will come in contact with humans.

In some coyote populations, up to 70 percent of their diet is associated with humans, Brown said. Some of that comes from people feeding coyotes, but much of it is not, and includes pet food, trash and fruit trees.

Then there are the pets themselves. Although larger canids will kill smaller ones to limit competition for resources — wolves, for example, will often kill coyotes — the behavior is not uniform, Brown said. In a 2016 study of coyotes and foxes in Madison, Wisconsin, scientists found coyotes were less antagonistic toward foxes in urban areas than they were in rural ones, even though rural areas provided each animal far more space. The study’s authors theorized that urban settings offered a greater density of food options.

But other data suggest that coyotes may provide a grim explanation for the surge in missing cat posters that have popped up on telephone polls recently. Quinn’s organization recently concluded a study of coyote diets. (Unlike others, which had looked at scat, or coyote feces, the study examined the contents of the stomach of dead coyotes.) It found an increase in the proportion of coyotes’ diets made up by felines.

“When we look at studies now versus 10 years ago, the proportion of cats has gone from two percent to 20 percent,” Quinn said.

In a series of emails sent out to residents, officials in South Bay cities have urged people to call the police department’s non-emergency number to report coyotes, and to secure their trash containers. Under state law, wildlife officials will only attempt to capture a coyote if it has proven threatening toward human life. (Agriculture officials may also pursue coyotes on public land if they are “found to be causing damage.”) Because coyotes are “nongame” animals, there are theoretically no limits to the number that private citizens may take. But California regulations limit the manner in which people can pursue them. Poison, dogs, traps, and electronic noise are all prohibited. And local laws in the South Bay make it illegal to discharge a firearm to kill one.

Some scientists have suggested that, just as coyotes can become “habituated” to urban areas, they can be “hazed” to alter their behavior and make them less comfortable around humans. Although the evidence on the effectiveness of hazing is mixed, Brown recommended that people concerned about encountering coyotes while out walking carry something capable of making a lot of noise, such as a collection of pennies sealed in a jar. You can shake it at them and shout if they approach, Brown said, or if that’s not enough, throw it at them. Striking them with the container will scare them off, but likely won’t injure them.

“These animals are really tough. Unless you’re a Major League Baseball player, you’re not going to hurt them,” Brown said. ER