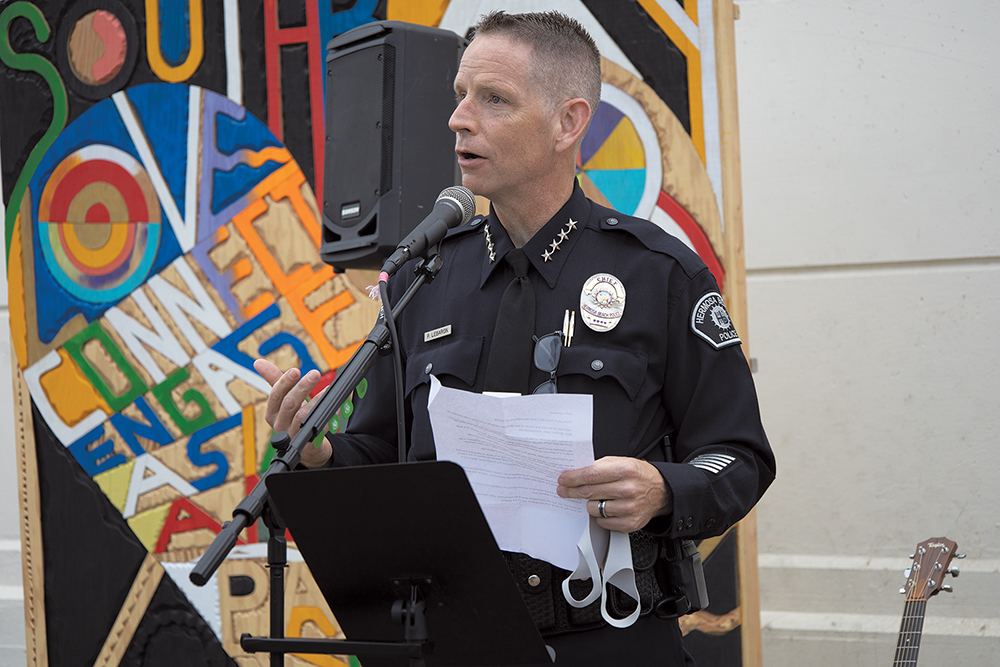 Hermosa Beach Police Chief Paul LeBaron said Monday, he is more concerned about the “business plan” of proposed retail marijuana dispensaries in the city than he is about potential crime and other social concerns.

LeBaron made his comments to the city’s newly organized Cannabis Advisory Group Monday, a citizen committee seeking to identify public opinion on potential retail sales of cannabis in  Hermosa. The group was meeting for the second time, and heard from a variety of health, public safety, and cannabis industry representatives.

The issue on the table for the group, according to city officials, “is whether the city should change its current ban on cannabis sales, and how that would impact law enforcement and the community.”

Proponents of retail sales of pot in the city are currently gathering signatures to qualify an enabling ordinance for the Nov. 22 ballot. They have until June 18 to submit 1,530 signatures of registered voters.

Similar efforts are underway in Manhattan Beach where proponents have until April 26 to submit the needed 2,700 signatures. And in Redondo Beach, the council chose to put the issue to its voters in March 2023. In Redondo, the council plans to put its own cannabis ordinance on the ballot to compete with the initiative ordinance

LeBaron told the group, “My comments aren’t based on the fact that it’s cannabis being sold as the product. Really, to us it is more about the business model. Cannabis we understand is a legally distributed and consumed product in California. The police department respects that and understands that’s the reality and the law.”

But, he added, “The business model itself is something — when you look at the dispensaries that potentially could open up here — that we have to consider and pay attention to.”

“Cannabis dispensaries themselves, when they are licensed and run by responsible operators, they are very, very secure and they do a really good job of keeping the safety and the problems to a minimum,” he said. “They usually have responsible security guards… and we [law enforcement in general] haven’t seen any problems there.”

On several occasions, City Manager Suja Lowenthal halted discussions to ask members of the group to refrain from expressing their personal opinions during and after the presentations.

Attorney Katie Podein said she was representing Dan and Abu Siddiq who believe cannabis “should be sold by storefront and non-storefront businesses in Hermosa Beach.”

But former mayor and council member Carolyn Petty echoed other residents’ comments when she questioned the validity of data presented by marijuana advocates.

“That sends out very antiquated information to the group, and that to me is very problematic. Just say no,” she said.

The Cannabis Advisory Group will meet weekly until late this month, when it will make its proposal to the council as to whether retail sales of cannabis should continue to be banned, or if sales should be allowed.

The city council is contemplating placing a “competing ordinance” on the ballot if the current signature-gathering campaign by proponents is successful, one the council believes would better reflect the community’s needs. ER