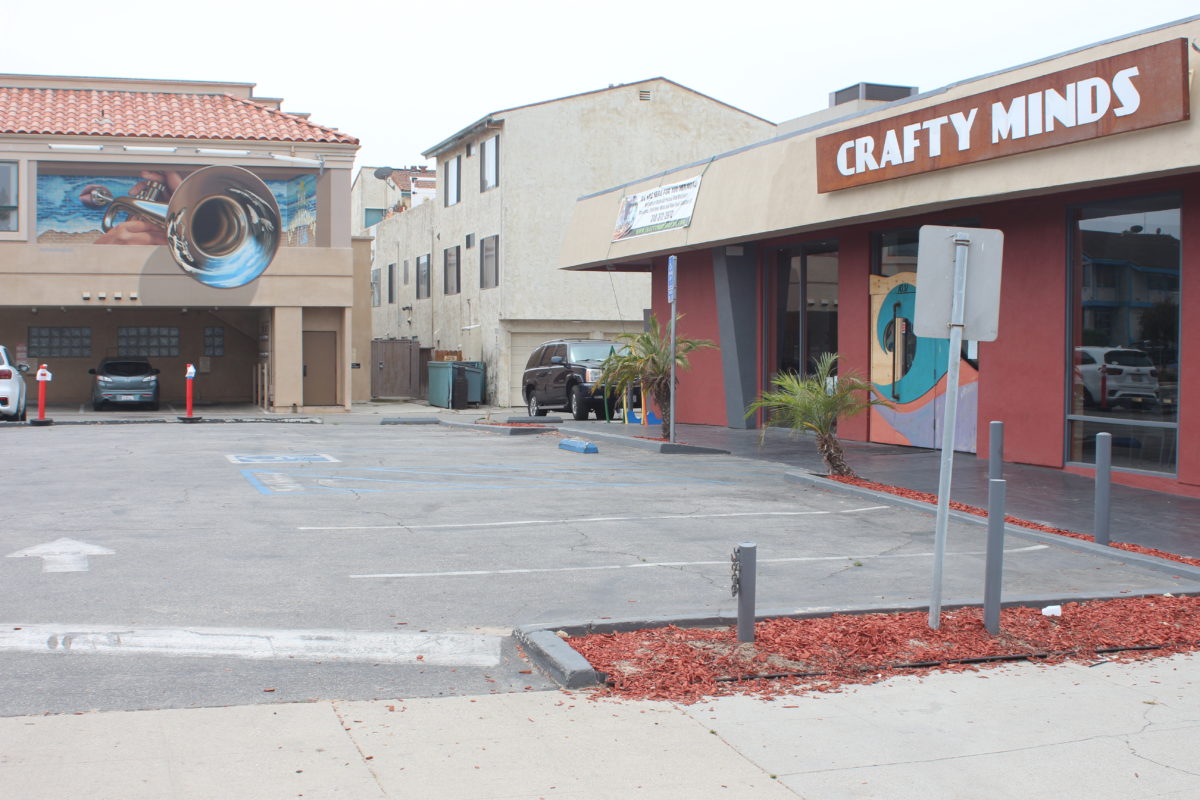 Parking lots like this one for Crafty Minds on Hermosa Avenue could soon become sites for outdoor dining. Photo

Parking lots like this one for Crafty Minds on Hermosa Avenue could soon become sites for outdoor dining. Photo

Restaurants in Hermosa Beach may soon be able to reopen with tables in streets and parking lots, and retailers will be able to hold their longest-ever sidewalk sale, thanks to a series of measures approved by the City Council Tuesday. The action is intended to help Hermosa businesses survive the economic downturn associated with the coronavirus pandemic.

The vote was unanimous, but as of press time was still partially dependent on action from Gov. Gavin Newsom to take effect. On Tuesday evening, after the council meeting was already underway, the Los Angeles County Board of Supervisors emerged from a closed session discussion and made a pair of long-awaited announcements: All retailers could immediately open for in-store shopping with reduced capacity; and the county was applying for a variance that would allow cities in the South Bay and the rest of Los Angeles County to enter Phase Three of the state’s reopening plan, which would permit the return of on-premises dining and some personal service businesses, like hair salons.

Since the issuing of the county’s Safer at Home public health order in March, all restaurants have been limited to take-out or delivery service, while barbers and hair salons have been closed. Michael Edwards, Hermosa’s interim emergency management coordinator, said the county would likely have to pursue the reopening of restaurants and salons with separate requests, because the two will have different requirements about what modifications are needed to safely reopen in the time of COVID-19. While both activities remain unlawful until the state’s action, Edwards said the Newsom administration has so far been quick to approve similar variance petitions.

“The governor has previously acted on requests within 24 to 36 hours,” he said.

With action by the governor, the council’s changes have the potential to dramatically reshape the look and feel of parts of Hermosa, particularly the downtown. Over the past month, the state Department of Alcoholic Beverage Control also issued a series of temporary “regulatory relief” notices that relax restrictions in state law on serving beer, wine and cocktails. Bars and restaurants have been allowed to sell to-go drinks for more than a month. Under a pair of updates the ABC made over the last two weeks they would now be able to sell alcoholic beverages to customers in adjacent parking lots, sidewalks and other spaces “under the control” of the establishment.

Hermosa’s code allows for limited dining and drink service on restaurant patios, but typically requires a separate permit from the Planning Commission, a requirement that will be waived under the new rules. Community Development Director Ken Robertson said that, with the council’s vote, city staff would immediately begin processing applications for restaurants that want to expand their footprint. Businesses with privately owned outdoor spaces, such as the parking lot for Crafty Minds on Hermosa Avenue, would likely be the easiest applications to process. Those wishing to set up tables in public spaces would likely take more time to process, because the city would have to consider conformance with other laws, including the Americans with Disabilities Act.

“That will not mean all businesses can set up outdoor dining by the end of this week, but it may be possible for the more simple cases,” Robertson said. Businesses wanting to serve alcohol must also fill out a separate application to the ABC.

For retailers, the county’s action mean they can reopen immediately for in-store shopping, but must ensure that their store never reaches more than 50 percent capacity. Hermosa’s action on Tuesday temporarily suspends provisions in the city’s municipal code restricting outdoor retail displays, to help them make up for that limitation. Scientists believe there is a lower risk of spreading COVID-19 in the open air than in a confined space.

Retailers also must comply with a dense, five-page list of health protocols, which include daily symptom checks for all employees, wearing of face coverings and frequent sanitizing of all equipment. South Bay retailers have long said they are ready to meet these requirements, and have complained they have been forced to close while “big box” retailers have been allowed to remain open. Those stores were exempted from the closure orders because they contain grocery stores, pharmacies or construction equipment, all of which are considered “essential” services. Last Thursday, Los Angeles County Supervisor Janice Hahn petitioned Newsom to allow smaller retail stores throughout the state to open.

“If these measures are working to keep essential retail businesses like Target, Home Depot and Costco open and safe, they can certainly be applied to our smaller retailers,” Hahn wrote on Twitter.

The coronavirus pandemic has been unevenly distributed throughout the country, so far hitting urban areas much harder than rural ones. Rules from state public health authorities have allowed counties that meet certain metrics, such as hospital capacity and the share of people testing positive for an active COVID-19 infection, to move ahead of the state into the next phase of reopening.

Los Angeles County makes up about a quarter of California’s population, but has been responsible for a majority of deaths and positive cases of COVID-19, and is among the last counties in the state to reach the state’s reopening thresholds. Over the last three months more than 2,100 people in the county have died of COVID-19; by comparison, the 2018-19 flu season saw 125 influenza-associated deaths. But within Los Angeles County, cities and neighborhoods with higher shares of poor and minority populations have been hit the hardest. The Beach Cities, mostly white and highly affluent, have been spared the grim toll of other areas, which some businesses have seized on as reason to let Hermosa and neighboring cities move ahead of the county in reopening.

On Tuesday owners of some hair salons urged the council to help them reopen as soon as possible. Amanda Bauer, owner of Beck + Brix Salon on Pier Avenue, said it was challenging to be “grouped into L.A. County.”

“It’s hard to basically be told we are at the very end” of the reopening process,  Bauer said.

Public health officials have described the coronavirus as highly contagious, and it is unclear how lower numbers in a given city would prevent a business there from being a site of spreading the virus, unless it were to limit service only to local residents. With the arrival of the summer season, Hermosa’s beaches make the city a destination for people from all over Southern California.

Robertson said, given the rapid changes in law and demands placed on public health authorities, compliance with regulations is likely to fall mostly on the businesses themselves. He said code enforcement officers, in deference to the challenges faced by businesses, had become more like “code ambassadors,” helping publicize and explain new rules rather than giving out citations.

Among the sticky issues was how to prevent businesses taking advantage of the relaxed ABC rules from “turning into beer gardens” as Mayor pro tem Justin Massey described it. State rules issued May 15 require businesses serving alcohol in new outdoor spaces to serve “bona fide meals.” Council members considered including stricter requirements, but ultimately declined against requiring all drink orders to be accompanied by food.

“If someone is eating and they’re having a couple drinks, that is not something we’re going to be nitpicking,” Armato said.

Only one business in the city, the Hermosa Saloon, has a license to serve alcohol without food. Guidance from the ABC issued last week allows such businesses to sell drinks outdoors if they partner with another food service, such as a food truck.

Many urged the council to pursue a light touch when it came to the regulations.

“You keep saying it’s only temporary,” resident Ray Dussault said of restrictions put in place to limit the spread of COVID-19. “When you’re faced with these rules, remember that these are only temporary, too.”

While the new rules were welcomed by businesses, it’s far from clear that they will be enough to ensure their survival. Hermosa resident Ron Newman, who owns Sharkeez and Tower 12 on Hermosa’s Pier Plaza as well as 10 other restaurants throughout Southern California, said the Memorial Day weekend, typically one of the busiest of the year for downtown eateries, was “like a regular weekend in the winter time.”

“It’s very hard to make a profit. Even with these extra patios, it’s not going to have the same feel. It’s hard with six-foot distancing rules,” Newman said.