Husband and wife team Scott and Jenni Morse enjoy a coffee-fueled morning on their patio. Photo

The kitchen sink in Jenni Morse’s apartment had clogged. Again.

The culprit was coffee; grounds from Morse’s French press, to be exact.

“My landlord had to tell me twice to stop putting grounds down the sink,” she said.

The incident was inspired in equal parts by Morse’s insistence on quality coffee, and the burdensome cleanup associated with a French press. A few years later the Hermosa Beach-resident has a home of her own, but no longer needs to worry about stopped drains. She developed a machine called the Simpli Press and, along with her husband Scott, hopes to bring the product to coffee drinkers everywhere.

The device takes the same unplugged approach as a French press, adding water directly to ground beans. But rather than collecting against a glass bottom, the coffee grounds sit in a small pod. When finished, instead of jostling the plunger and glass container to remove grounds caked to the surface, the grounds can simply be dumped out of the pod.

“The idea and the concept are awesome,” said Andrew Stanisich, owner of Manhattan Beach’s Two Guns Espresso, who offered advice during Simpli Press’s development. “As most people know, a French press is an awful mess: you’re banging it around to clean it out, and you risk breaking it.”

Simpli Press is aiming for more than just ease of use. The device has also earned positive reviews from serious coffee aficionados. In October, it won third place in the Best New Product competition at the prestigious Portland Coffee Fest.

“People would come back to the booth, telling their friends, ‘You have to try this,’” Morse said.

The key to the flavor of Simpli Press coffee, Morse said, is in the grind. Unlike a French press, which relies on coarse grounds, the ultra-fine mesh of her product’s sieve allows for use of a finer grind, closer to what would be used in a cone-filter machine. The difference, Morse said, means that the same amount of coffee ground for Simpli press will have up to 40 percent more surface area than it would for a French press. The result is that the same amount of grounds can produce a richer brew, and in about half the steeping time.

Morse envisions the Simpli Press as a way to bridge two competing desires in coffee consumption: quality and ease.

She points out that consumption of Keurig coffee has skyrocketed. In 2013, coffee drinkers in the United States went through an estimated two million “K-cups” everyday.

At the same time, coffee is going through a “third-wave” renaissance, with roasters and customers increasingly convinced that it deserves the kind of obsessive attention lavished on wine.

According to the Specialty Coffee Association of America, a Santa Ana-based trade group that helped Morse and her husband with market research, about one-third of adult consumers now drink premium coffee daily, up from 24 percent in 2010. 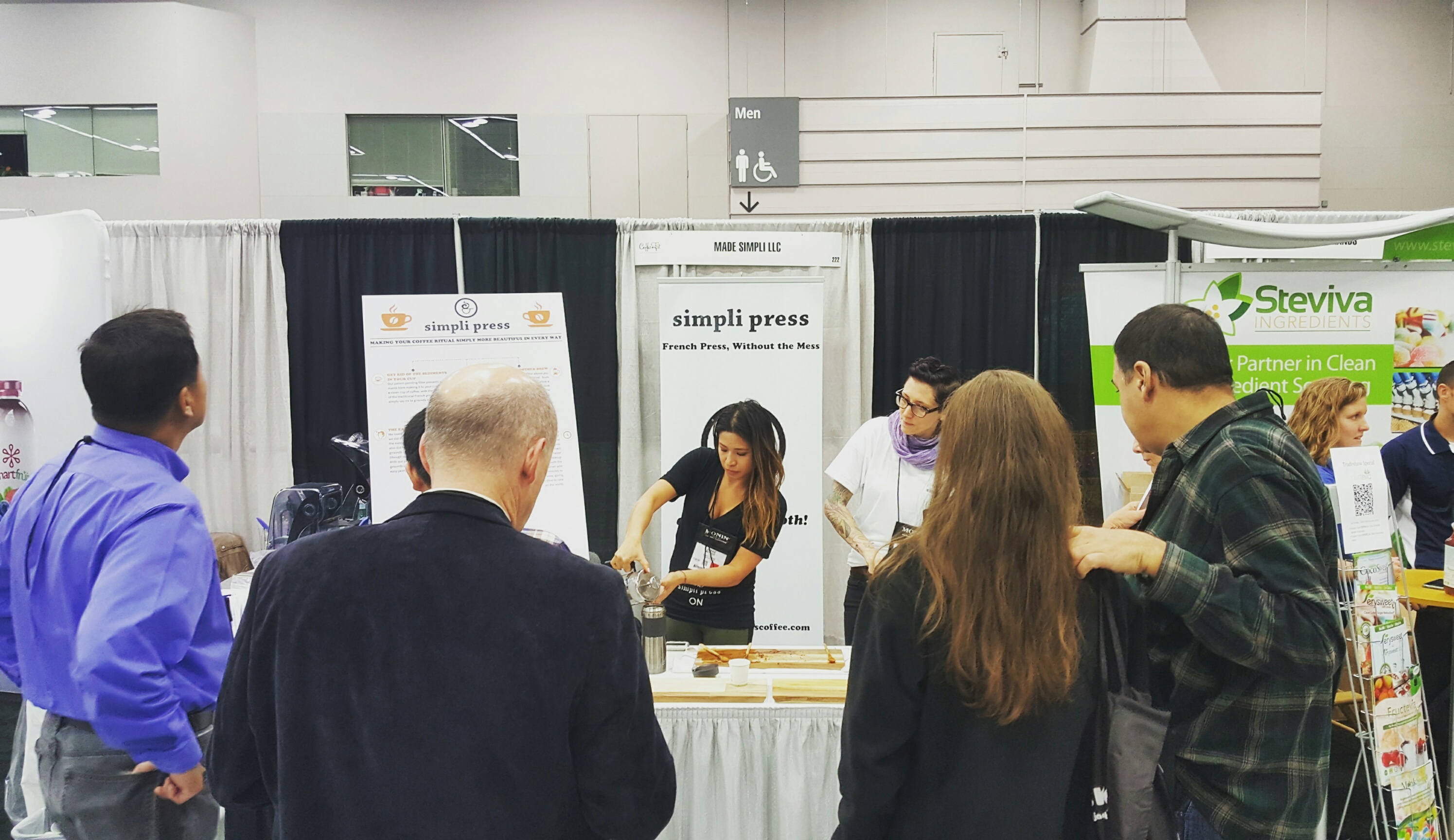 Markets have taken note. In the same way giants like Anheuser Busch are acquiring microbrews to tap into the demand for craft beer, established coffee companies are buying java startups. Peet’s Coffee & Tea acquired niche-roasters Stumptown and Intelligentsia in 2015.

“It’s about seeing coffee as a fine product, not just a commodity,” Morse said. “It’s more culinary, not just about getting a caffeine fix.”

After sketching out the basics of the product, Morse applied for a provisional patent in January 2014, and hired an industrial designer three months later. The company is now on its second prototype, with hopes for having the third, production-ready model by the end February or early March.

“The pour over, the French press, all the older ways of making coffee are coming back right now,” said Scott, who serves as the company’s CFO.

The pair’s next steps will be to ramp up their marketing campaign, and to launch a Kickstarter in the spring.

Although much of their preparation for manufacturing the Simpli Press has put them in the rarified world of coffee obsessives, they hope to find a wide audience for their product in retail outlets and online.

“It’s great to talk to connoisseurs, but you have to translate it,” Scott said. “Ultimately, people just want a great cup of coffee.”