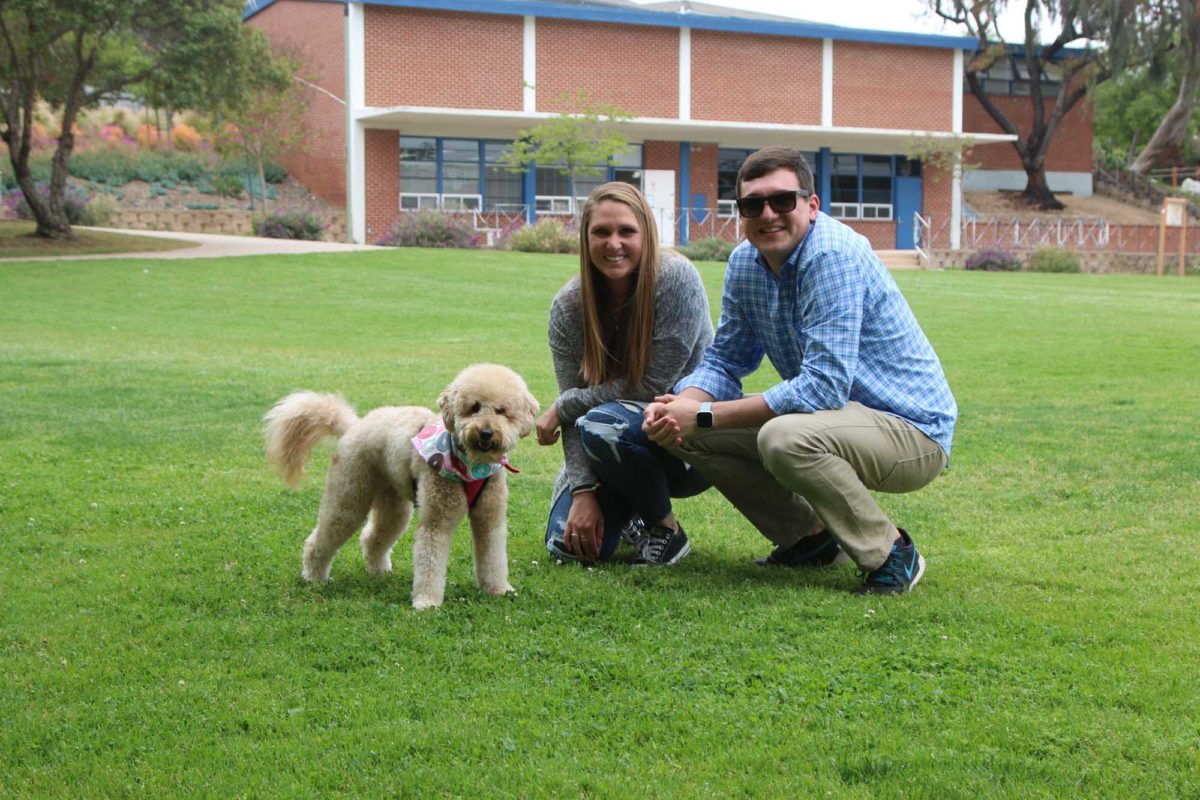 Hermosa residents Chelsea Peabody and Charlie Eldred with their Doodle, Katie. Katie suffers from cerebellar hypoplasia, but doesn’t let it affect her enjoyment of South Park. Photo by Ryan McDonald

Katie is one of Hermosa Beach’s very own influencers. She’s got thousands of adoring fans on Instagram and a compelling life story. She’s even got a fashionable wardrobe that goes great with the color of her fur.

Katie is a doodle, one of the many Hermosa dogs brought by owners to South Park for socializing and a change of pace. Unlike most other dogs, however, Katie suffers from cerebellar hypoplasia, or CH, a neurological disorder that impairs balance and motion in dogs and cats.

Her owners, Hermosa residents Charlie Eldred and Chelsea Peabody, say that she has difficulty controlling her body’s movements. And visitors to South Park likely won’t find Katie pulling frisbees from the sky. But once there, Katie becomes adorably animated, and will wiggle in place or hop across the grass.

Animals suffering from CH are not believed to experience pain from the disorder, and while there is no known cure, dogs with CH can live long, full lives, and South Park has provided a welcoming atmosphere that is helping her do just that.

Eldred and Peabody live near South Park and don’t have a yard. Both work from home, so they come down three to four times a day. There, Katie can socialize, lie in the grass, or, her favorite, “dog watch.”

“She’d would sit down here all day if we let her,” Peabody said.

The couple adopted Katie at the beginning of the year. Since that time, the park has helped her build up a network of canine chums.

One of them is Joey, and her owner Carla Michaels. Joey was instantly drawn to Katie the first time he saw her, Michaels recalled. She could see that there was something different about Katie, but Joey, she said, is normally “very picky and selective about the kind of dogs he likes,” and they got along from the start.

“She’s gotten much more comfortable in the few months that I’ve known her,” Michaels said of Katie. “I understand that she can never be quote-unquote cured. But I do believe she can learn. And I’m starting to see that she’s learning.”

Eldred and Peabody adopted Katie from The FARM Rescue, a foster-based nonprofit that seeks long-term owners for dogs and cats. The facility focuses on animals who may have a harder time finding a home.

FARM Rescue founders Pam Fritsch and Soila Vasquez opened their Mesa, Arizona facility after years of taking in and fostering animals on their own. (The FARM Rescue — which stands for the “Furever” Animal Rescue and More — got its name from the wide variety of animals that the two cared for, and, to this day, goats, ducks, pigs and even a tortoise have a permanent home there, along with dogs and cats on their way to adoption.) They took in Katie after hearing about her from a fellow rescue operator, who had been contacted by a breeder.

It was apparent to the breeder that Katie, as well as her siblings Josh and Billie, suffered from CH. The breeder had planned to euthanize the animals, but couldn’t bear to go through with it. Fristch and Vasquez’ colleague was hesitant to take the dogs, thinking that they would be expensive to care for and difficult to adopt out. So Josh, Katie and Billie joined the menagerie at the farm.

They found a home for Josh first, and Eldred and Peabody found Katie through Josh’s Instagram exploits. (As of press time, Josh had accumulated more than 73,000 followers.) The social media platform has become an increasingly popular way for rescue dogs to find a home.

“I can’t say that I paid too much attention until recently. But it seemed like, five years ago, a shelter was just the place for dogs that no one would ever want,” Eldred said. “It’s a great medium for showing that these dogs are not rejects.”

Eldred and Peabody visited Arizona so that Fritsch and Vasquez could see how they interacted with Katie. Fritsch said she was hesitant to let a needy dog move out of state. But after a day in their company, she was convinced.

“Charlie and I both stood at opposite ends of the yard. We both called Kate, and she went to him. That totally put me at ease. She had a connection,” Fritsch said.

“The life that Kate has, it makes me cry every time I see her,” Fritsch said.

Eldred and Peabody have become evangelists for disabled animals, and Katie’s cause-driven online following is yet more evidence of the social media power of animals. A national CH Facebook group has more than 13,000 members, and the group gets dozens of posts per day. And for the South Park regulars who have seen Katie blossom over the last few months, gathering on the grass is a good way to put things in perspective.
“It’s kind of a social hour for dogs. It’s a really nice dog community, and I look forward to it,” Michaels said. “To be honest, it’s made me understand Hermosa a little better. There can be quite a bit of negativity about how the community changing. It may be all true, but the reality is, a lot of great things are happening here.”