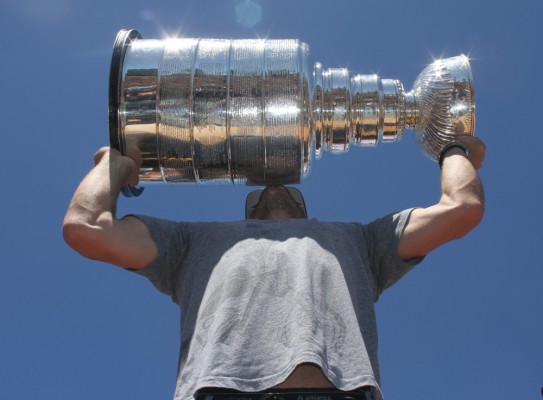 The Los Angeles Kings’ Jarret Stoll brought the Stanley Cup to Hermosa Beach on Monday, and about 5,000 people showed up at pier plaza to have a look— and if possible, a touch.

“It was amazing,” said Ryan Henderson, 10, of Hermosa Beach. He reached out and touched the cup while Stoll carried it from a fire truck on the Strand to the stage in front of Hennessey’s Tavern.

“It was like my first time I ever seen it in person,” Henderson said. “I got a really good view, and Jarret Stoll came through the aisle with the cup, and he was right next to me. I got to touch the cup. It felt super heavy.”

Some couldn’t quite get close enough to touch it, but seeing it was still a thrill.

“I saw my reflection,” said Jessica Otte of Torrance.

“I’ve been waiting since I was a kid to see the Kings get the cup,” said Shaun Hatfield, wearing a T-shirt of the 1993 Los Angeles Kings, which lost the Stanley Cup to the Montreal Canadians. “As you can tell from my shirt, I was heartbroken in ’93. I was a sophomore in high school. But we finally got it, 2012. So it’s finally a great thing to be able to take the kids out here and see the cup.”

The Hermosa Beach Chamber of Commerce and the City Council put the event together. Several of the Kings’ players live in Hermosa Beach, and all but one player lives in the Beach Cities.

Stoll, from Canada, said Hermosa Beach is like a second home for him.

“We love this area. We love Hermosa Beach,” Stoll told the crowd. “It’s going to be a good summer.”

Stoll turned 30 and signed a new three-year, $9.275 million contract over the weekend. He thanked the crowd’s many cheers by waving and hoisting the cup numerous times. With a grin, he endured everybody singing happy birthday. Hermosa Beach Chamber of Commerce Spokesman Matt Bennett asked Stoll how the Kings won the championship earlier this month.

Stoll, standing next to the cup, said, “Our confidence was so high, and we just kept riding it and riding it– as long as you can until you get this guy right here.”

Stoll was the star, and so was the Stanley Cup. The cup made its appearance at pier plaza on a fire truck driven from the station on Pier Avenue. Folks lined the streets for photos and to wave at Stoll atop the hook and ladder.

When Stoll moved the cup to the stage from the truck and back again at the end of the event to be transported to Manhattan Beach, hands reached out for a rare chance to touch the storied Stanley Cup.

Noah Meadows, 11, got close enough to read some of the names of championship teams engraved on the Stanley Cup. “It was really cool. I actually read it. It had 1926 [Montreal] Canadiens on it.”

“He almost got to touch it,” said Noah’s mother Jennifer Morris, explaining that a police officer had blocked the way.

Others were able to land a hand, and it’s a memory they won’t forget.