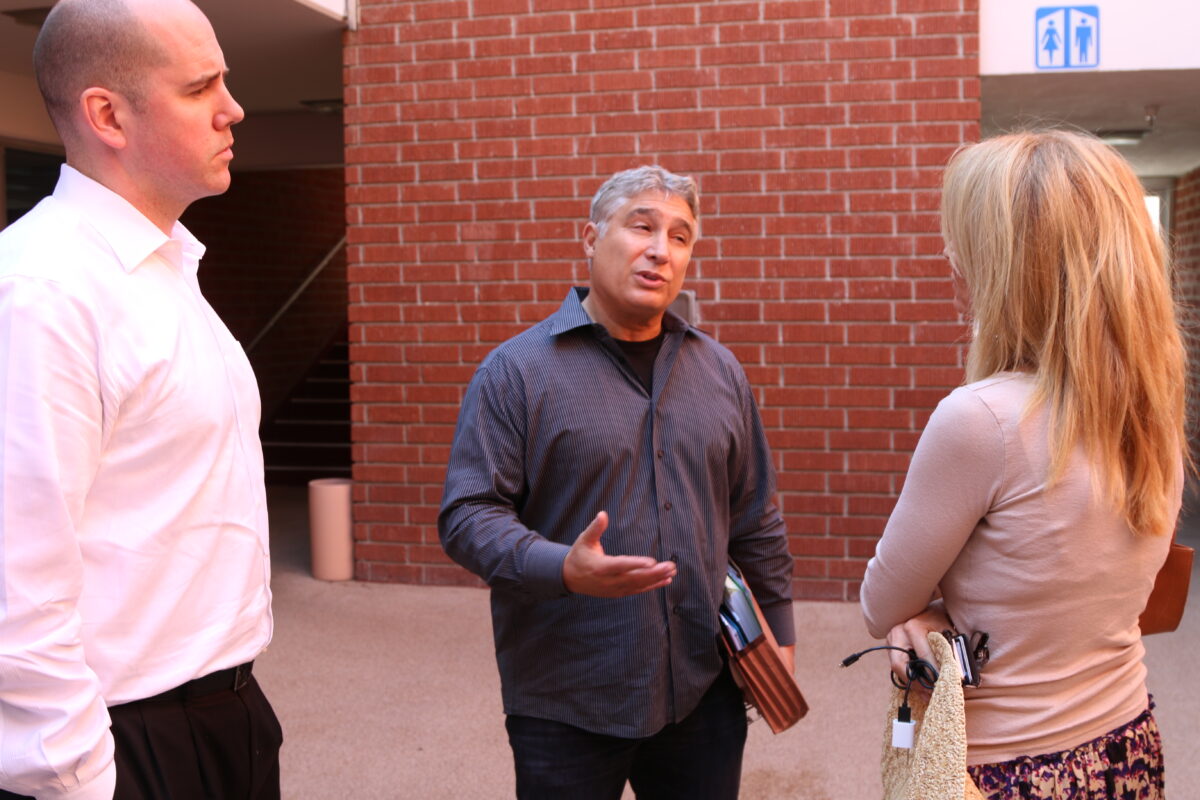 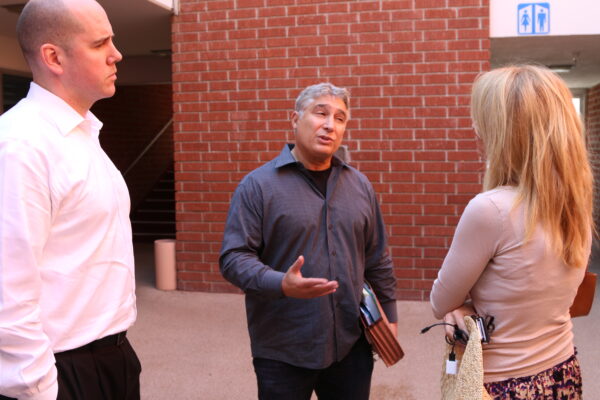 One year ago, dollar projections for E & B Natural Resources’ proposed oil drilling and recovery project in Hermosa Beach appeared clear, if broad-ranged.

The City of Hermosa Beach would receive royalties of $118 million to $270 million over the 35 years the city gave E & B rights to drill from the city maintenance yard at Sixth Street and Valley Drive. That assumed residents vote March 3 to lift the ban on oil drilling that voters imposed in 1994.

The school district would receive royalties of $1.2 million to $2.2 million over the same period. The royalty projections were contained in a February 2014 cost benefit analysis prepared by Kosmont Companies, at the request of the city council.

Since then, those numbers have become a moving target. 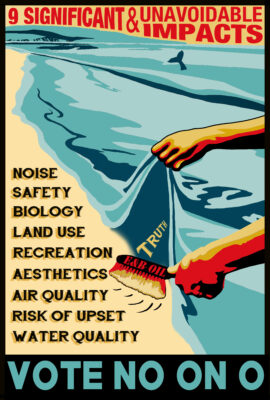 The first significant numbers shift came in September, 2014, when State Lands Commission Chief of External Affairs Sheri Pemberton told the city that the 3.3 percent royalty due Macpherson Oil Company must be paid from the city’s upland royalties. The Kosmont report assumed Macpherson’s payment would come from tideland funds. That decision could reduce the city’s net oil revenues by $33 million or more. 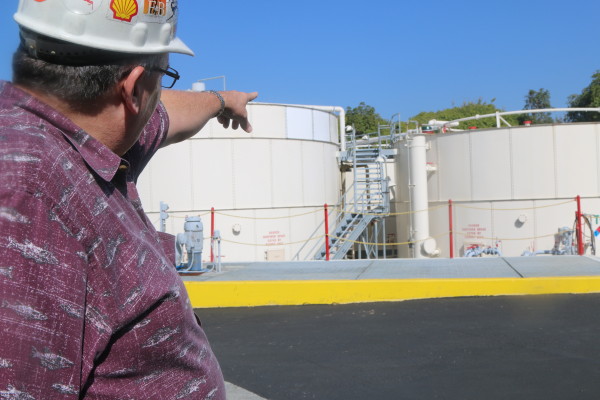 Louis Zylstra, head of E & B Natural Resources facilities in the Los Angeles area, points to the company’s facility in Huntington Beach. The plant is similar to what is proposed for Hermosa Beach. Photo .

In November, the city’s oil projections received a boost when E & B agreed to forgive the $17.5 million it had loaned the city to pay off Macpherson Oil in 2012, when E & B acquired the Macpherson drilling rights.

At the same time, E & B sweetened its royalty offers to the city and the schools by offering an additional one percent royalty to the city and a new, one percent royalty to the Hermosa Beach Education Foundation. The offer was made to the education foundation rather than the school district because under state law, the district’s state funding would have been cut by an amount equal to 50 percent of E & B’s contribution.

Kosmont estimated the one percent to the school district would equal $16.5 million over the term of the lease, assuming oil was at $95 a barrel, an assumption Kosmont made throughout its cost benefit analyses, including the final CBA released in November. It seemed a reasonable assumption. Oil prices had been over $100 per barrel and climbing since 2011.

But in December, that assumption was called into question when oil prices plummeted roughly 50 percent.

The oil price drop, coupled with the added cost of the Macpherson royalty and added one percent city revenue, estimated to be $26 million, prompted the city council in December to ask Kosmont to rework its Cost Benefit Analysis.

Kosmont responded with a supplemental report in late January. It projected city and school royalties based on oil prices ranging from a low of $40 per barrel to a high of $120 per barrel.

The firm’s president, Larry Kosmont, a former city manager, presented a summary of his supplemental report to the public during a Saturday morning meeting at City Hall on January 31.

Kosmont explained that his revenue projections assumed Hermosa’s uplands and tidelands oil reservoirs held approximately 150 million barrels of oil, of which 17 million barrels could be recovered.

At $40 per barrel those numbers would be $61 million and $26 million, respectively.

In his presentation, Kosmont noted, “In the author’s opinion, the applicant may not proceed with the proposed project if prices remain low [but] it is unlikely prices will remain at lows for an extended period of time.”

In response, E & B Vice President of Governmental Affairs Michael Finch said E & B will not delay their project if it is approved by voters. “We agree with most experts that prices will not remain low. The EIA (Energy Information Administration) short term forecasts predict prices will increase by the end of this year and the long term forecasts support $100 per barrel of oil.”

Should voters not lift the oil ban, Kosmont said, the city would need to repay E & B the $17.5 million loan. The city has $6 million set aside to meet this obligation. The balance, Kosmont said, would cost $825,000 to finance over 30 years. The city’s current annual budget is $34 million.

Kosmont’s City Hall presentation was based on his 188 page, final cost benefit analysis.

Neither proponents nor opponents of the drilling were satisfied with Kosmont’s conclusions.

E & B cited a study by the Berkeley Researching Group, which it commissioned in 2013. Berkeley estimated E & B could recover 36 million barrels of oil, double Kosmont’s “expected” recovery number. The higher volume would increase royalties to the city and schools to $500 million and and $40 million respectively.

Oil drilling opponents faulted the report for overestimating city and school revenues and underestimating the project’s costs to the city.

With regards to neighboring property values, the report states, “The authors have not been able to find conclusive, credible information to establish a reliable estimate of potential value impairment, if any.”

E & B has agreed to set aside $25 million to compensate homeowners near the site who sell their homes at below 2014 prices.

Oil opponents have argued the property depreciation should be included in the city’s costs.

The 1,000 homes within 1,000 feet of the proposed drill site average $1.3 million each, according to Zillow, he said. A 10 percent drop in property values would cost homeowners $130 million and cost the city and county nearly $20 million in property taxes if the homes are sold or re-assessed, Schmeltzer argued.

The most contentious issue regarding the oil revenue projections is how tidelands revenue can be spent. The issue is significant because approximately 80 percent of the city’s projected revenue is expected to come from the tidelands, located between the mean high tide and one mile off shore.

The California State Lands Commission Public Trust Doctrine states, “Uses of trust funds…are generally limited to those that are water dependent or related and include commerce, fisheries, and navigation, environmental preservation and recreation… They must be used to serve statewide, as opposed to purely local public purposes.”

E & B’s Finch said. “We’ll argue that sewer and road improvements and police beach patrols are allowable because they benefit all beach visitors, not just residents.”

Finch noted that if Hermosa’s 1919 State tidelands grant doesn’t give the city sufficient leeway the city can ask the state legislature to modify the grant.

Hermosa currently receives restricted tidelands revenue through a 2002 agreement with TyCom Networks. The agreement allows TyCom to bring its Transpacific fiber optic cable ashore at Second Street. The only use the city has made of the cable’s tidelands revenue has been for beach restroom and pier improvements, according to city finance director Viki Copeland.

The Kosmont report suggests that a definitive answers on Hermosa’s spending of  tidelands revenue may need to be decided on a case by case basis.

“Absent a court legal judgment, the California State Lands Commission generally provides a final determination of what is, or is not a permitted use of Tidelands funds,” the report states. ER