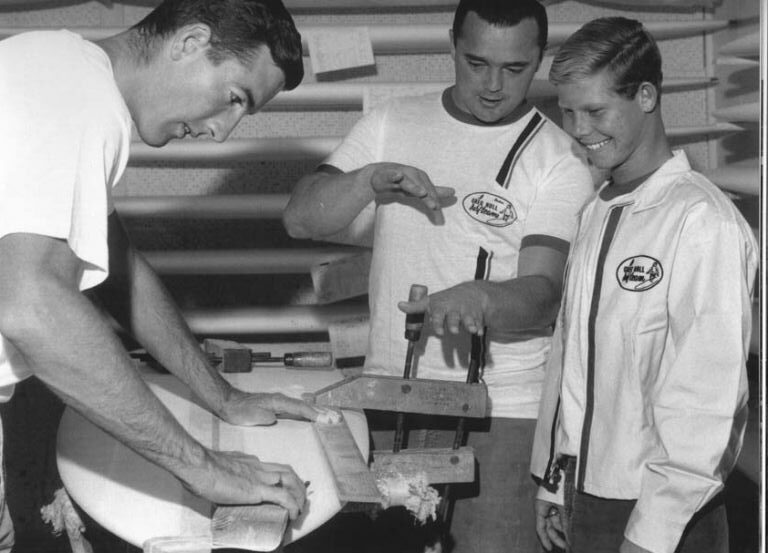 Ricky James, Greg Noll and East Coast Champion Gary Propper, who went on to success in Hollywood as the producer of Ninja Turtles. Photo by Leroy Grannis

When I was a 12 year old surf grom my friends and I hung out at The Greg Noll shop after school and passed around “The Thumb.” It was a human thumb in a block of resin sitting next to the cash register. We didn’t know who’s thumb it was or where it came from. The people that worked at the shop refused to talk about it but they let us pass it around for 30 minutes and then kicked us out of the shop.

When I was 18, I got my own Jacobs Surfboard Mike Purpus Model. Hap Jacobs had Ricky James shape my boards. He was missing his thumb. I asked Ricky what happened to his thumb. He refused to say anything about it and got mad when I asked.

A few months went by and I finally got Ricky to tell me what happened to his thumb. Ricky used to shape for Greg Noll, making The Mickey Dora Da Cat Model. One Friday morning Mickey came by the Noll Factory to have Ricky shape him a new surfboard. They finished around lunch. Greg went to the store to get the usual Friday beer keg and the rest of the guys had gone to lunch. Mickey wanted a special fin for his new surfboard. When Ricky was cutting it out on the bandsaw his hand slipped and he severed the thumb. Ricky was in shock with blood spurting everywhere. Mickey grabbed a rag for a bandage and rushed Ricky to the ER.

The ER doctor asked where the thumb was? He said he could sew it back on. Mickey raced back to the factory. He screamed, “Where’s the thumb?”

Greg held up a block of resin and said, “How do you like my new paper weight?” He had filled a Dixie Cup with resin and dropped the thumb in.

Mickey raced back to the ER and handed the doctor the block of resin with Ricky’s thumb. The doctor said, “What am I supposed to do with this?”

When Ricky told me the story I said “I loved that thumb.” Ricky said “Not as much as I did.”

He told me if I ever repeated the story he would quit shaping my surfboards. Ricky shaped really good boards, so I couldn’t tell anyone for five years, when he moved down to San Clemente. 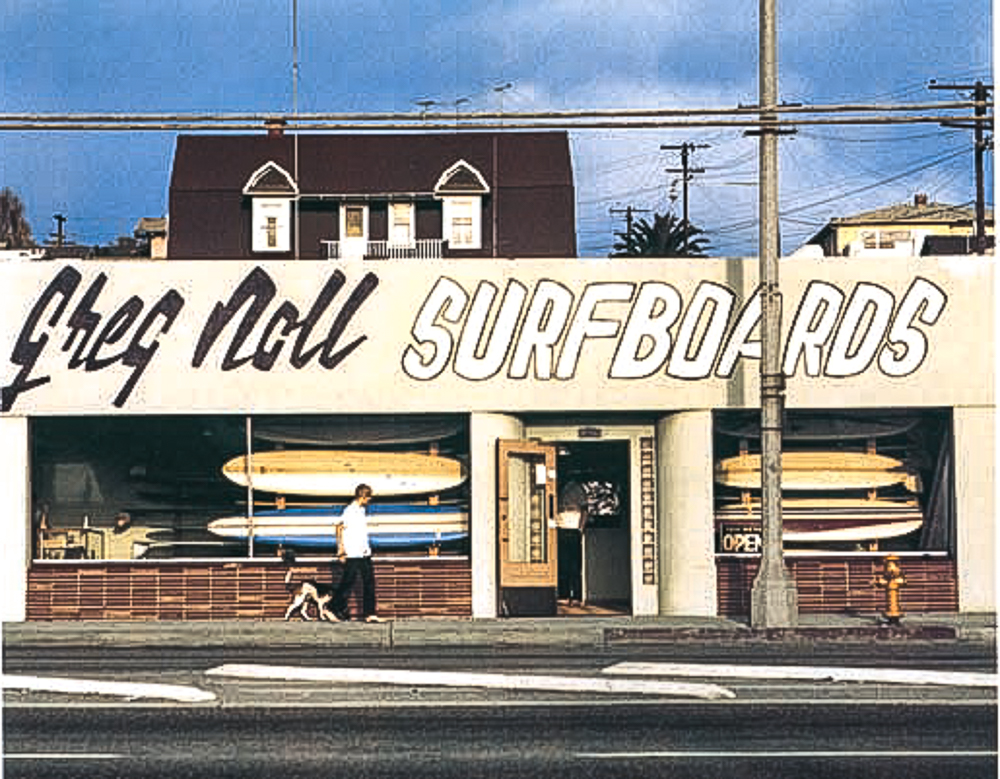 Greg Noll was the king of big wave surfers. He didn’t go out unless it was over six feet’. He only surfed big Redondo Breakwater and Lunada Bay.

I remember seeing Greg and Mike Doyle paddle out from inside the Redondo harbor on a 20-foot day so Warren Miller could film them for his annual ski movie, which always had a surfing segment because Warren was a surfer before he was a skier. They both caught two monster waves. There were no wetsuits, no surf leashes, no inflatable life vests, and no jet skis with lifeguards on them. It was just them in the middle of the ocean. Doyle almost drowned. Greg laughed and said he loved it.

Greg also ruled the North Shore. He was the first to ride Waimea Bay. Every ‘60s’ surf movie started with Greg flying down a 40-foot face that had all of us in the audience screaming. He won the Duke Kahanamoku Surfing Invitational riding 20-foot Sunset Beach. All the best big wave surfers rode for Greg Noll boards. He had the biggest surfboard factory, on Cypress and Valley, in Hermosa Beach. During the mid 60’s he was making close to 200 boards a week.

In 1968, Greg Noll asked me to come down to his factory. He wanted me to surf for him. He was really intimidating, sitting at his big desk in front of this big fish tank filled with piranhas. He fed them raw hamburger. I said I needed  $100 a week to cover my bills. He said he would pay me $5 a surfboard. When I refused his offer, he came out from behind his desk and poked his finger into my chest until I was pinned against the wall. Hawaiian surfer George Downing came by in the middle of the argument and told me to run. I ran all the way home.

Greg signed Johnny Fain instead of me and filed for chapter 11 the following year.

Greg and I never talked much after that until we were inducted into The Surfers Walk of Fame in 2003. I explained to the crowd that there would be no big wave surfers or surfing if it wasn’t for Greg Noll. He was the first and the best to paddle into huge waves like the ones surfers are getting towed into today. It was always just Greg against the sea no matter how big the waves were. Afterwards, Greg thanked me for the kind words and shook my hand. ER