IN MEMORIAM Eric Dellenbach’s fight comes to an end 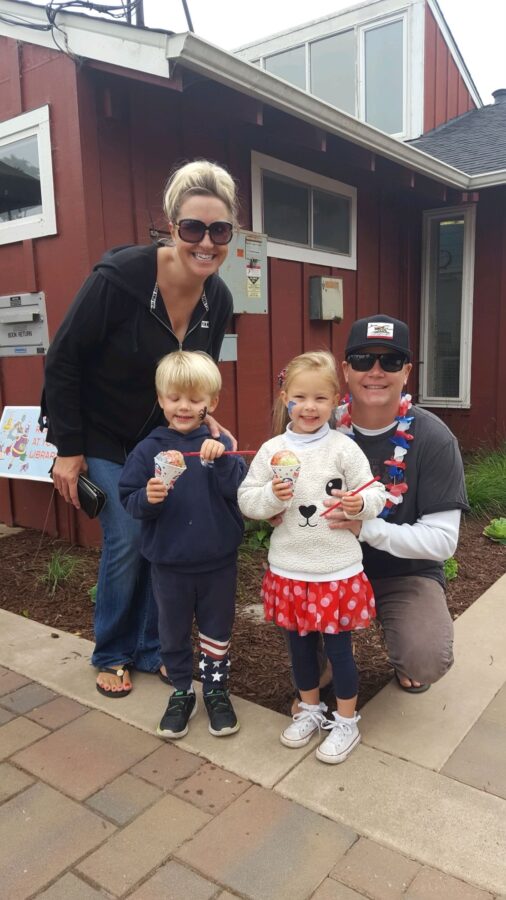 Eric Dellenbach with his wife Erika and kids Jaxson and Mia. Photo courtesy the Dellenback family 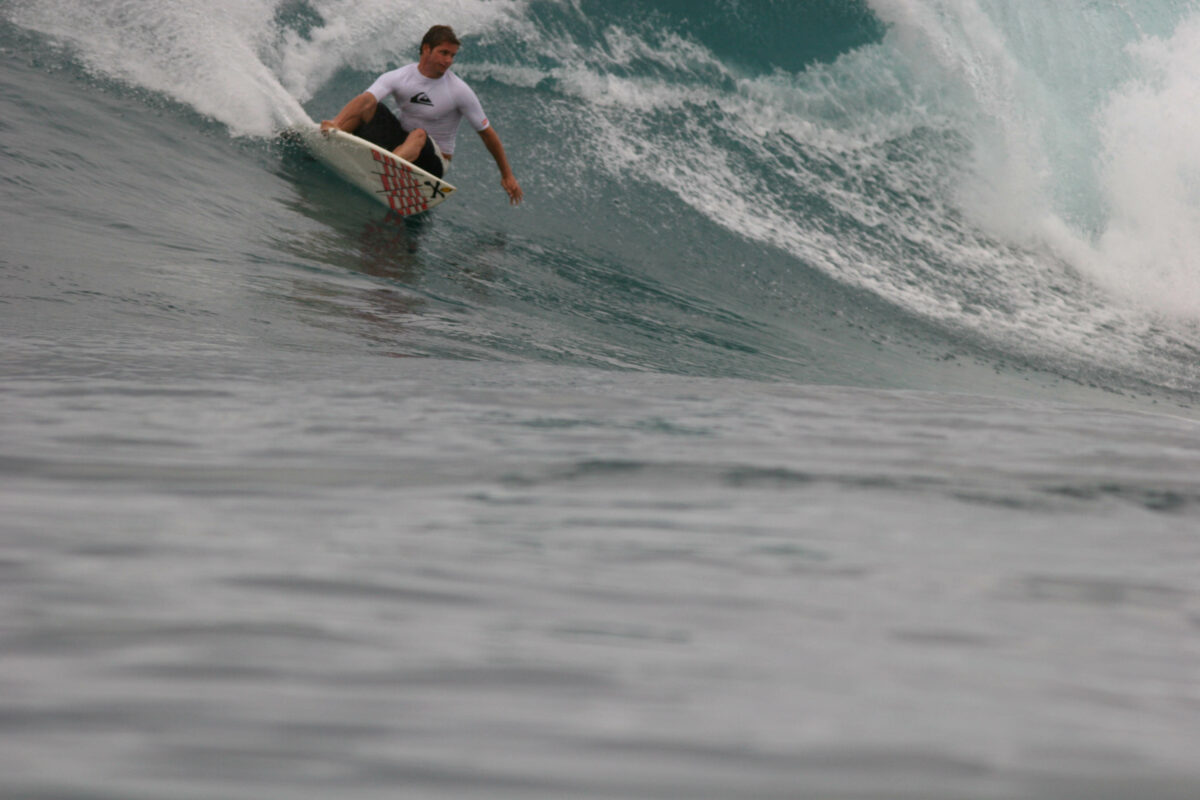 Eric Dellenbach surfing off the Mentawai Islands in Indonesia. Photo courtesy of the Dellenbach family

Eric Dellenbach’s long, hard-fought battle against the devastating impacts of COVID-19 came to a peaceful end the night before Thanksgiving.

The Manhattan Beach native, who lived near Seattle, departed while in the arms of his wife Erika and surrounded by his loved ones. A lifelong dedicated surfer, Dellanbach’s farewell was accompanied by the music of waves crashing.

“His family was able to say their goodbyes, [and] our incredibly brave Eri was laying on him, holding him, [and]  kissing him as he crossed that finish line, in first place,” wrote his sister-in-law, Sam Schacher, on a GoFundMe page that has knit together a lifetime of Dellenbach’s friends to help his long fight. “As shattered as we all are — it was a send-off fit for a king. Well deserved.”

His 11-month fight, which included a lung transplant, and four months in an induced coma, meant that Dellenbach had come to be considered “the sickest COVID patient to ever survive.” On Thanksgiving, his brother Andy Dellenbach expressed gratitude for everyone who had joined in that fight, but also for the fact that his brother’s grueling battle was finally over.

“Finally, I am thankful that Eric’s battle is over and he is not struggling to breathe, is not in pain anymore and showed us what it looks like to fight like a warrior,” he wrote. “I am thankful that Eric reminded me — and all of us — how precious life is…every breath, every hour, every day.”

In an interview, Andy Dellenbach remembered his brother as “a typical South Bay guy.” The family arrived in Manhattan Beach from Wisconsin when Eric was five, and while he grew up at Duncan Place, and attended Robinson Elementary, Pacific Middle School, and Mira Costa High, his home was at the beach, particularly near 4th Street, where he and his buddy Jimmy Miller grew up to become among the area’s best surfers. He went through the Junior Guard program and for much of the remainder of his life lived to surf.

“He grew up as a prankster in South Bay, hanging out with his friends doing all the stupid stuff we do when we’re kids,” Andy Dellenach said. “He fell in love with the beach, and volleyball and surfing, and just all of those things that kind of personify life in the South Bay.”

His brother credits Dellenbach’s tenacity in part to the fact he was the youngest of three brothers who were each only a year and a half apart.

“My brother Greg and I, when we were younger, tended to pick on him, and I think it made him stronger and a fighter because of it,” he said.

Dellenbach might have stayed in the South Bay forever except that the area changed drastically from his childhood, in terms of affordability, which eventually came into conflict with two of his lifelong goals —  starting a family, and owning a house. He obtained degrees in Graphic Arts from California State University in San Diego and Graphic Design at the Art Center in Pasadena. He lived in San Diego for more than a decade, working both as a graphic designer (including work with Skechers) and establishing his own real estate brokerage office. He met Erika in San Diego, and they married in 2009, eventually moving back to the South Bay briefly and then to Santa Cruz, where her parents live. 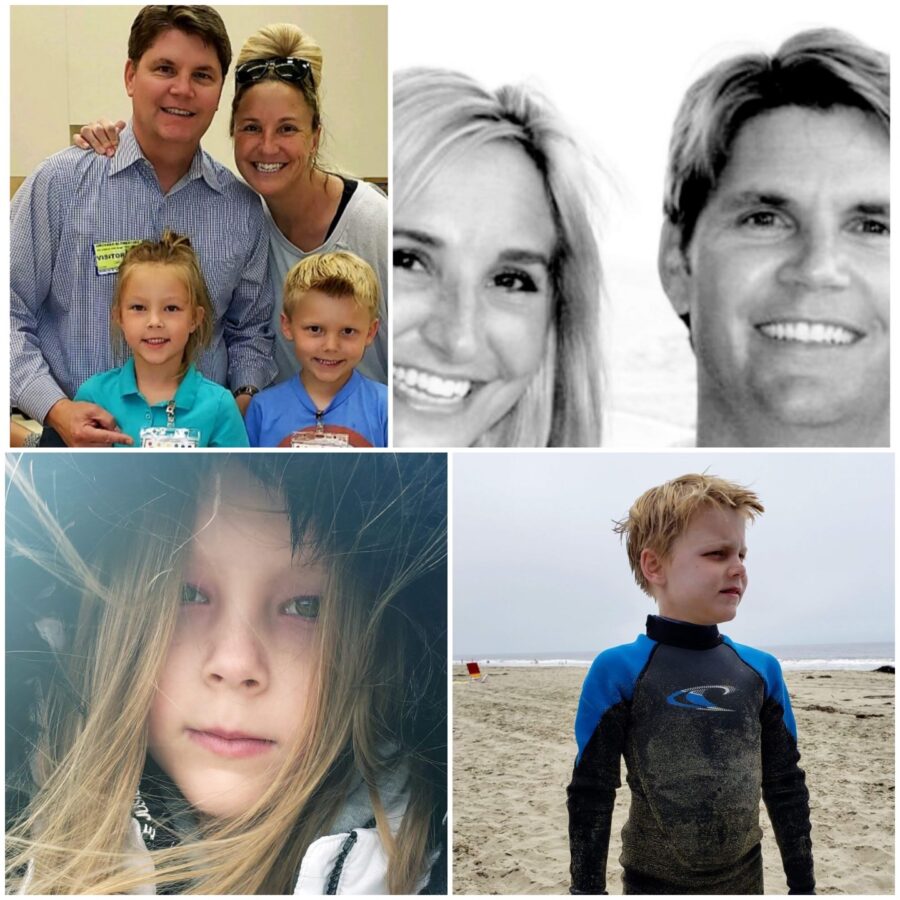 One of his biggest dreams came to fruition in 2013, when twins Jaxson and Mia were born. “These treasures arrived on April 24th, precisely one day before Eric’s birthday…just as he, himself had arrived (April 25) one day before his own dad’s birthday (April 26),” Andy wrote in an obituary for his brother.

Dellenbach was utterly focused on providing for his young family. He obtained yet another degree, an MBA, and was recruited to Washington for a position as a hospital administrator.

“He was very talented,” his brother said. “He had both a business mind and an artistic mind…..He went from being a graphic designer with a keen eye for creativity to a hospital administrator.”

Everything he did at this point was for his family. Though he’d moved far from his friends and was no longer the dedicated surfer he’d been much of his life, Dellenbach was just about to obtain his other dream —  he closed on a house the very week he came down with COVID.

“He bought a house but never actually moved into it because he got sick,” Andy Dellenbach said.

Dellenbach, his wife, and their twins all contracted COVID-19 early last January. The cases were mild, except Eric’s. He went to an emergency room in Seattle. But because he didn’t fit the high-risk profile —  he was 51 and healthy, with no underlying health conditions whatsoever —  he was sent home to recover. His health deteriorated rapidly, and a day later he was rushed by ambulance back in the ER.  He’d developed Acute Respiratory Distress Syndrome (ARDS) from the fluid build-up in the lungs. The damage to his lungs required intubation, and doctors told the family he would need a special kind of life support machine, called an ECMO, just to survive. They had to find another hospital with an ECMO, and then he had to complete the dangerous process of transport.

This was the beginning of an arduous medical journey that would soon grow even more challenging. He was soon placed in a coma to better give his body a chance to rest and focus on fighting the infection. Doctors eventually concluded he would need a lung transplant to have any chance of surviving, and again the family had to find a hospital willing to accept him for the dramatic operation, and then await a suitable lung transplant donor. The University of California San Francisco hospital accepted him, and he was transported there in early April. A set of lungs became available on April 12 and Dellenbach underwent a 20-hour surgery that day.

By this time, Dellenbach’s fight had become almost legendary. The GoFundMe page set up to help raise funds for the family had become something far beyond a fundraiser. Thousands of people had joined “Team D” and awaited daily updates.

“His story touched a lot of people, and they came together to read those updates daily,” Andy Dellenbach said. “It was a bit episodic —  you know, the battle was transpiring day by day. And people turned to it as a reality TV show, not to be entertained, but just to hold out hope there would be good news and a positive result in the end. In a weird sense, it brought a lot of people who had been separated from each other back together again. He reunited us.”

He also received shoutouts from surf legends, including Peter Mel, Adam Repogle, and Laird Hamilton, the latter who posted a message for Dellenbach on YouTube.

“Life deals us different hands at different times and we’ve got two ways we can look at it,” McConaghy said. “We can sit there, or we can battle through, and look around at our nearest loved ones and love them even more, and let ourselves be loved by them even more…My hunch is the hardships will make sense one day, either in this life or the next one.”

Dellenbach and Team D definitely took the second route, battling through, bolstered by more and more love. Andy Dellenbach marveled at his brother’s wife, who led the charge, waking well before dawn to commute three hours daily from Santa Cruz to San Francisco so her husband never had to fight alone.

“She was the love of his life, but I don’t know that you come to appreciate your spouse or your significant other until you get into a situation like he was in,” he said. “She was the most amazing and dedicated wife for the 11 months that they battled, as his medical advocate, fighting for him and encouraging him and being his biggest cheerleader.”

He appeared on the path to overcoming impossible odds. He began talking again, and eventually began physical therapy and walked again. Finally, he was able to breathe on his own again, and on July 16, his final tube was removed —  his feeding tube —  a milestone his sister-in-law recorded.

“Wow, this feels so good,” Dellenbach said into the camera. “I can breathe.”

A month later, he was discharged from the hospital, and allowed to go to his wife’s parents’ house in Santa Cruz to continue physical therapy with his family.

“Those were all the high points where he got to see his kids again, and he got to spend some time at home, being a family, and reading books and loving on his kids,” his brother said. “And even though he couldn’t go out and kick the soccer ball with them, at least he was able to have some semblance of a home life with kids. I call it his life extension. Even though it was brief, I think if you asked him if he would do it all over again, and go through the pain and everything he went through to spend another month and a half with his kids that he probably would say, ‘Yeah, I’d do it again.’”

In October he ended up back in the hospital, battling infections in his lungs, sepsis, and ultimately organ failure. He never made it back out of the hospital. But his family and friends plan to take him on a pilgrimage to several of his favorite surf spots, concluding at the famed big wave spot on an island off Baja in Mexico, Todos Santos, where his ashes will be set free.

Andy Dellenbach said his brother will be remembered for his selfless nature and his sense of humor, but in some ways that his soul was most fully expressed in the way he surfed.

“A lot of his friends he grew up with would say he was a really good surfer with a very classic smooth style that made him the envy of a lot of people, just for how well he surfed and how smooth he was,” he said. “I think that was a good portrayal of his character around other people too. While he could rip —  jokes on people, cut-downs or whatever —  it was always done with style, and in a good-natured humor. That’s kind of the best way I could see him.”

Eric Dellenbach was preceded in death by his dad, Barry (1995).  He leaves his immediate family; his mom (Jolene), siblings Greg (Michele Menton), Andy (Jena Franklin), and Jade Plotkin (Josh Plotkin); as well as sisters-in-law, brothers-in-law, nieces, nephews, cousins and a myriad of friends. A celebration of life service is yet to be planned but will happen in the new year, with paddle-outs in various locations where he loved to surf. ER