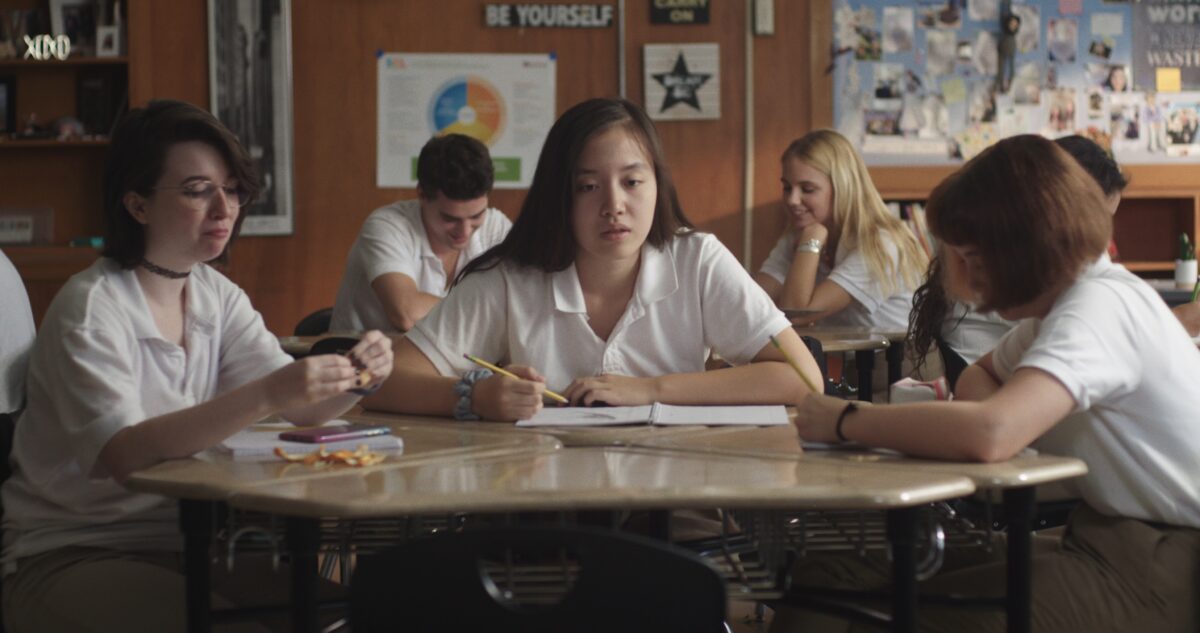 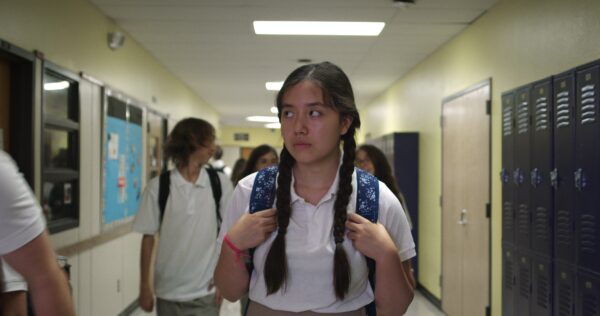 Writer/director Mei Makino has hit a homerun, or at least a standup triple with “Inbetween Girl,” chronicling teenaged Angie Chen’s search for self when the world as she knows it crumbles around her.

Angie, with a Chinese father, Fan, and Anglo mother, Veronica, has never quite fit in. As she sardonically mentions to her ever present video camera, she represents the only diversity in her private school. She has decided to document her life to date by making a time capsule full of mementos, art work, and videos that she is shooting. She admits to the camera that this will all seem silly in the future and more than likely she will no longer be in contact with anyone she includes, but it is, after all, a snapshot of her present life.

A talented cartoonist, she doesn’t look like anyone else, nor does she think like anyone else. But Angie’s world is collapsing and it has sent her off the rails. Throughout childhood her parents’ marriage was chaotic. They lived out loud and argued constantly; this was her normal. Then out of the blue, or at least to her, they announced their divorce, separating precipitously. Fan is banned from the house and Veronica explains how much better it is for her to be on her own. Neither parent has given any consideration to what might be better for Angie and she finds herself completely unanchored. 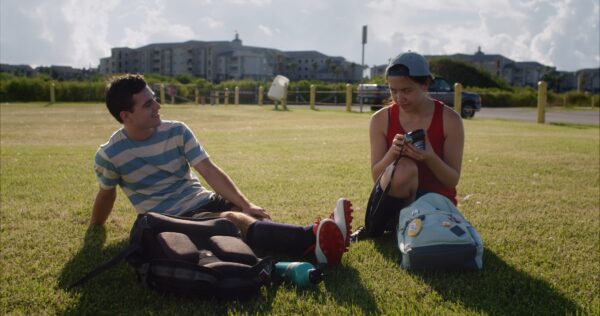 William Magnuson as Liam and Emily Galbraith as Angie in “Inbetween Girl.” Photo courtesy of Utopia.

When top jock Liam, her ride home from soccer practice, begins a flirtation, she doesn’t quite know how to interpret it. Angie is definitely not cool kid material. Besides, Liam has a girlfriend, the social influencer, gorgeous, “has everything” Sheryl. Flirting is one thing, but Liam has something else in mind, provided that Sheryl, whom he has deemed overly fragile, doesn’t find out. But, what the hell. Throw caution to the wind and act on emotion for a change. Everyone else seems to. Maybe she is what he really needs and wants; or maybe it’s what she’s missing and wants. A fling with the most popular boy in school is just what the doctor ordered, even if it’s secret and slightly yucky.

Seemingly tough as nails and wise beyond her years, or so think her peer group, Angie is at sea without a life jacket. Fan has a new Chinese girlfriend with a stereotypic super achiever daughter on her way to Stanford on scholarship. Angie’s not a high achiever and she’s not Chinese like the new “daughter.” No longer a part of his life, her mother has absented herself with work. Angie has lost sight of who she is, if, in fact, she ever knew. 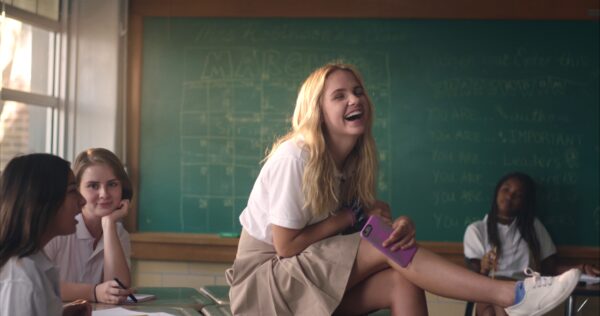 Complicating things even more is Sheryl, Liam’s acknowledged girlfriend. When she and Angie are paired on a school project, Angie’s guilt kicks in. She begins to see that her behind the scenes betrayal has real consequences on someone who has never done her any harm. She also begins to see herself through her actions and it’s not what she hoped for. There may be consequences for those in her triangle, but the consequences for her and what she’s become are greater. How can she make her way back without a compass? Does she have the courage to face her actions? How do you find yourself when everyone else already seems to know? Perhaps you begin with the realization that there is no roadmap and you are responsible for your own actions.

That Angie is mixed race is only one factor in her search for a better self. Realizing that there are aspects of being different that are important is a first step. The baby steps that the unmoored Angie begins to take are giant steps toward a successful, independent adulthood. People are hurt, Angie and Sheryl included; some may never have to face the consequences of their actions; and still others will always be clueless. As Angie begins to learn that she must establish a moral code she can live with even though she was let down by almost everyone around her, she learns resilience. Her sense of irony will carry her through.

Makino has written a lovely and trenchant story with characters who are more than tropes. Angie is a wonderful example of the complications of adolescence when the world on which she counted was upended with divorce. She makes good and bad decisions, many of which are led by an identity crisis that is compounded by her racial identity, and acts out. But Makino also gives us great portraits of the other teens in the triangle. Sheryl is more than the shallow beauty queen that Angie thought her to be. Liam, an example of charming duplicitous testosterone at work, leads Angie, Sheryl, and the audience down a path of his choosing. That we willingly go with them is an example of the depth of Makino’s writing.

The acting is terrific with first-timers as leads including the fantastic Emma Galbraith as Angie. Her Angie is acerbic, a cover for her fear. The charm that emanates from William Magnuson’s pores allows the audience to be swept into Liam’s lies and motivations. Emily Garrett as Sheryl exudes a childlike innocence that effectively offsets what could be the personification of white privilege.

The character development is first rate. Variations of this story have been told before, but if you tell it well, and she has, it will seem fresh. Makino, mixed race herself, has made a film where she can see herself, and we can too.

Opens On Demand May 3 on Amazon, AppleTV, iTunes, and Altavod.