“In the Land of Pomegranates” – The explosive kind [MOVIE REVIEW] 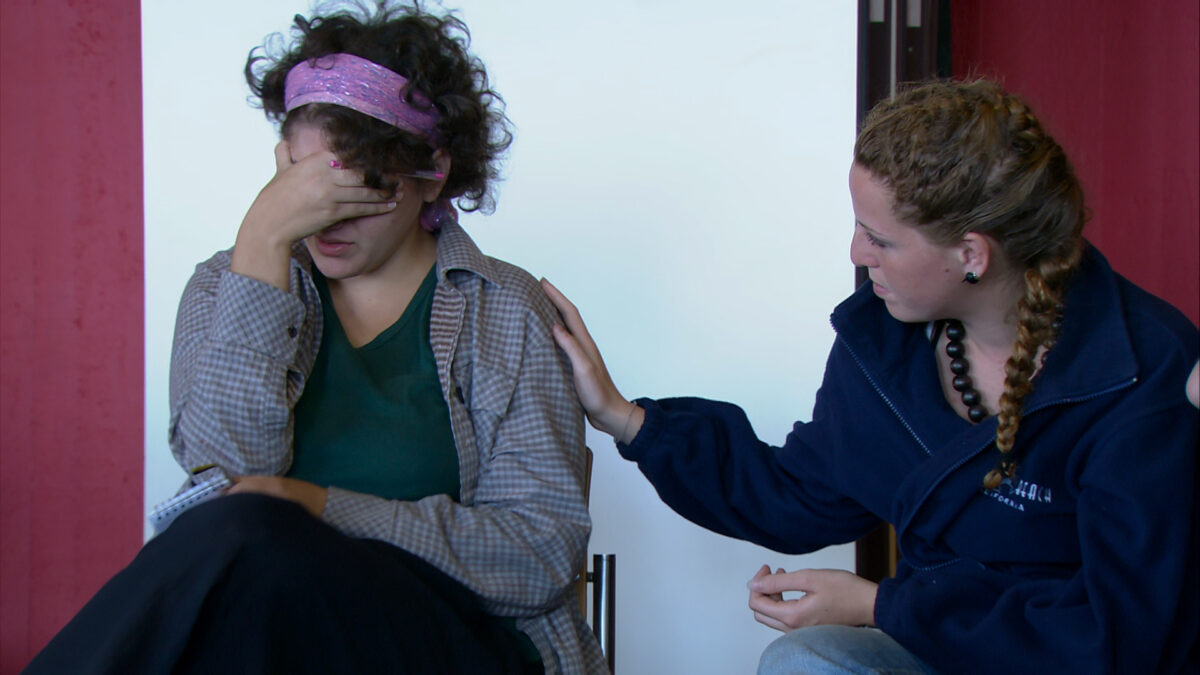 Ayana Lekach (L) & Rotem Dar (R) , as seen in “In the Land of Pomegranates”, a First Run Features release.

“In the Land of Pomegranates,” is a documentary that valiantly tries to give shape and form to the Palestinian-Israeli conflict in Gaza. It both succeeds and fails. Directed by Hava Kohav Beller with the excellent help of cinematographers Colin Rosin and Christoph Lerch, the bulk of this documentary highlights an idealistic, optimistic, and ultimately unrealistic program entitled “Vacation from War” where young Palestinians and their Israeli counterparts are invited to neutral ground in Germany to live together and try to have a meaningful bilateral discussion in an attempt to gain insight into their conflicting visions of life, for themselves and for their counterparts.

“Vacation from War” is a program started by a German organization called the “Committee for Fundamental Rights and Democracy” based in Cologne. As noted in their mission statement, “The idea is that children and young people lose prejudice and hatred if they can come to know their so called enemies in a carefree surrounding. We try to support young people on both sides to break the escalation pattern of violence in the hope that the next generation will live in respect and peace.”

And, as mentioned in the mission statement, it is hoped that by bringing together youth on the cusp of political responsibility, they might be able to have a positive impact on their respective governments if they begin to see their enemies as people rather than as ideologies. Would that it could be true.

For the youth of Gaza, this was an unprecedented opportunity to leave a land that is barricaded on all sides, to the west by the sea, to the north and east by Israel and to the south by Egypt. The bitterness and justifiable resentment is palpable from a group whose land has been taken (and in this case we’re only talking about Gaza), reduced, and barricaded; whose job opportunities are severely limited and often entail hours of travel through the security borders and walls set up by the Israelis; and who are gradually being starved by the economic boycotts supported by Israel, Egypt, and the United States. They espouse the sentiments of their ruling government, Hamas, with little regard for the fact that Hamas has caused most of their problems, and will continue to do so with their relentless campaigns of terrorist violence.

The Israeli participants, listening to their counterparts, try to express sympathy and keep an open mind but, as reasonable as the Israelis appear and resentful as the Palestinians come across, there is no common ground that they can find. The Palestinians expound the Hamas position that they will not be satisfied until the Israelis are driven into the sea. They have been raised on hate that has been fueled by Israeli policies. They view no other route than to continue waging war and viewing terrorist acts as a way to gain a foothold in heaven. When taken to visit a Nazi concentration camp, they only see that they, too, are being exterminated by their oppressor. One young man expresses the feeling that the Jews had it easier than they do because at least the ovens killed them immediately while they are being exposed to daily torture. Where, you must ask, is the hope for reconciliation in that?

And the situation deteriorates daily. An article in the February 12, 2018 edition of the New York Times detailed the continued worsening of the economic situation in Gaza as Fattah, the officially recognized ruling party of the Palestinians outside Gaza, exerts greater and greater economic pressure on the 2 million inhabitants of this postage stamp sized area. Debtors are sent to prison, food has disappeared in the closing of the borders on all sides, and there appears to be only one solution for Hamas, one they have used several times in the past – war against Israel in hopes of stimulating sympathy in the Arab world, a world that seems to have abandoned them in their internal conflict with Fattah.

As depressing as this sounds, it is considerably more upbeat than the rest of the film that documents the daily war of attrition waged against Israel, especially those people living near the border of Gaza, in many cases on Palestinian land, as well as the constant bombing that devastates both sides of the wall.

We are also introduced to the survivor of a suicide bombing attack that took place several years earlier. Formerly a successful photojournalist, he survived the attack only to be a victim of severe PTSD that sent him to a mental hospital for a year. Although his wife tried valiantly to hold the family together as he continued to cycle into and out of psychiatric care, she eventually had to divorce him in order to care for their children and herself.

Beller tries hard to find a positive note, one that emphasizes humanity and she finds it in the story of a child from Gaza who is brought by his mother to an Israeli hospital for cardiac surgery, without which he would certainly die. The care given the child and his mother is not bound by ethnicity or religion, just kindness and the Hippocratic oath. But then, not to diminish the power of this story line, that is, in essence what the Hippocratic oath is (would that physicians in the Jim Crow south had followed that mandate).

“In the Land of Pomegranates” was a particularly well-chosen title because the pomegranate has important religious spiritual symbolism in Semitic as well as Christian cultures signifying fruitfulness and fertility but whose root, granate, is also the derivation of grenade. At this point it would appear that the grenade is winning.

The film could have benefited from some judicious cutting to tighten the narrative. It is not, as the marketing would have it, a suspenseful film. It is, however, a very depressing but necessary one.

Have we been naïve in our belief that there can be a solution to the troubles in the Middle East? This film will make you question that belief, although I don’t believe that this was Beller’s position in making the film. In English, Hebrew, and Arabic with subtitles.