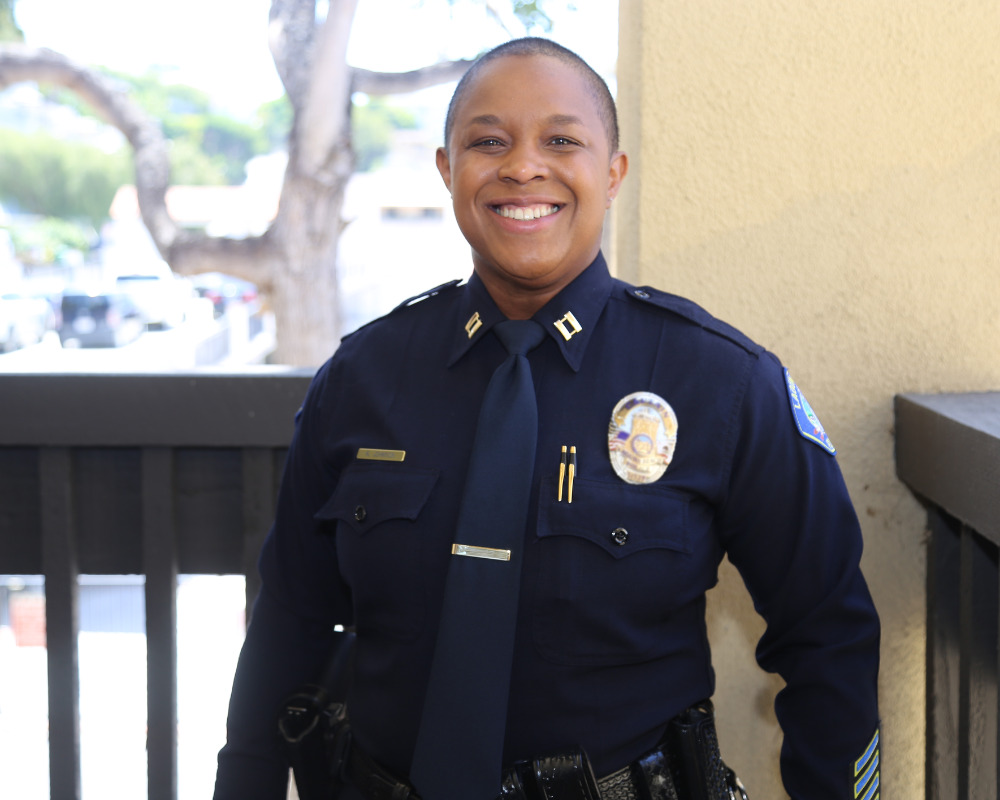 At the time, Johnson was a relatively young officer with the Newport Beach Beach Police Department. Kravitz was part of a testing panel Johnson had to face for promotion to sergeant. Such panels are typically comprised of leadership officers from several agencies, to remove bias within a single police department. And those tests are rigorous, probing every aspect of a police officer’s skills, and character make-up to ensure the candidate has true leadership capabilities. They include psychological tests, role-playing exercises, and interviews.

Her performance stunned Kravetz. Johnson was somehow both imperturbable yet exceptionally warm and personable, as if she was the one doing the interviewing, not the other way around. She was commanding, but in a natural, engaging way.

“When she was done, I found a moment to pull her aside,” Kravetz recalled. “And I told her I was going to steal her someday and take her to Laguna. The good news is I followed through on my word.”

Johnson was hired as a captain by Laguna Beach early in 2020. Only two months later, the pandemic hit. The Laguna City Council held a meeting and the city manager asked who was going to be in charge of citywide COVID-19 response, essentially the City’s “Czar of Covid.”

“The fire department was looking the other way,” Kravetz said. “And so the city manager said, ‘Captain Johnson?’ And she became our go-to authority, and our intermediary. She helped get us federal grants. And you know, the dark days of Covid were so depressing and sad. You didn’t know what was going to happen. She was always upbeat, telling us, ‘It’s going to be okay.’”

And so when Kravitz heard that Johnson, who is 44, had been appointed as chief of the Manhattan Beach Police Department, he was not in the least bit surprised.

“Oh my gosh, they are so lucky to get her,” he said. “She has always been chief material.”

Johnson’s star has risen rapidly throughout her 21-year law enforcement career, one that began directly after a four year enlistment in the U.S. Marine Corps. Johnson attributes her ascent ito various leadership roles not to any particularly special qualities, but something quite the opposite —  she says she “always raised my hand” when something was needed,

led by an openness to keep learning.

“I wanted that challenge,” she said. “I’ve always been interested in kind of trying to shore up my weaknesses, and be uncomfortable because it builds confidence, and it just makes you a better leader. And so at every step, when I had the opportunity to ask for something, I’d say, ‘Give me the hardest thing. Give me the thing I don’t know about. Let me figure that out. Let me grow.’ As far as my leadership philosophy, I’ve learned that being myself is the best thing. I don’t have an ego. I try to be the dumbest person in any room, and I work with people who are smarter than me. Tell me what I need to hear, not what I want to hear. And I want my people to feel I care about them, and that they’re a part of it. When I talk to my folks, I will say the only difference between you and me is one of us was silly enough to take a bunch of promotion tests.”

City Manager Bruce Moe said 12 candidates took part in the interview process for the chief of police position. He walked away from his interviews with Johnson convinced he’d not only just met an exceptional leader, but someone uniquely qualified to lead MBPD.

“To me, she has the whole package,” Moe said.  “She has the intuitive understanding of the uniqueness of Manhattan Beach. Of course, she has the experience of working in coastal cities —  you just need to get it. And aside from her leadership skills that were evident, and interpersonal skills, she just really cares about people. I mean, it’s not fake. It’s true caring. I think the men and women of the police department are going to be really happy with her in their court, because she walks the talk.”

Johnson has been preparing for this job all her life. She’s originally from Houston, Texas, and grew up in a family in which public service was a way of life —  her grandfather was an officer in the U.S. Army who served in the Korean War, her mother was an executive for the U.S. Postal Service, and her father was a U.S.P.S. mail carrier.

“Much of my upbringing was based on my mother’s upbringing in a military household,” Johnson said. “My mom was really no nonsense…Seeing her get up and go to work every day and make it happen and advance through the different levels of management, [I learned] things like the discipline, the service, and making sure that you’re responsible for learning from a young age.”

Johnson knew by the time she was about 10 or 11 years old what she wanted to do with her life.

“I’d wanted to be a police officer for forever, just absolutely forever. Watching the cop shows growing up, “CHiPs,” “Cagney and Lacey.” I thought there was going be a lot more theme music,” she said, with a laugh.

She enrolled in the Marines after high school because police departments don’t take applicants under 21. She chose the Marines because she considered the Corps to be the ultimate in military service.

“I figured if I was going to be in the military, I’d joined the military,” she said. “My grandfather was in the army, I had a sister in the Air Force, and just looking at what the Marines represented, that was what I wanted to be a part of. That legacy, hard-charging, hard-fighting, was something that very much appealed to me.”

She loved it from the outset, in boot camp, both for the work itself but also because of its leveling effect.

“It’s the same for everyone. Everyone suffers the same through boot camps,” Johnson said. “I call boot camp and the police academy the most fun you never want to have.”

Johnson served as part of Marine Tactical Air Command Squadron 38, which provides support to planes on missions. It’s a highly specialized squadron, and though the ground-side “grunts” give those in Marine air service a hard time for their relatively plush surroundings —  they always had electricity, for example —  it’s also high stakes work.

“I talked to airplanes when they were in the air to give them assistance if they were flying a combat mission, or in a dogfight with another aircraft,” Johnson said.

Johnson was able to see some of the world, since one of the bases for MTACS-38 was in Okinawa, Japan.

“They are just a really, really great people, a very selfless people, kind and caring,” she said. “Also, great beaches there. So it was just a really fun experience.”

Johnson might have stayed in the Marines but for her police service calling. She applied at several departments immediately after her U.S.M.C enlistment ended, and within three weeks was in a police academy. She begain her law enforcement career with the Orange County Sheriff’s Department. Her very first assignment was working at the Women’s Central Jail.

“For someone like me who’s never really been in trouble, it was a great opportunity to learn how to talk to criminals in a fairly safe environment. And so I did, when I had downtime,”  Johnson said. “People in jail will tell you anything, because they have downtime, too. It was a really good education learning how to talk to people, developing a rapport, all the things you need to do out in the field to be a successful police officer. I am very grateful I had that time to spend in a jail.”

This experience was something she’d think about for years to come. In most police work, encounters with criminals are brief, and the circumstances heightened —  during an arrest, or an investigation. But conversing with them in jail was, somewhat counterintuitively, a humanizing experience.

“When you’re thinking about being in law enforcement and the people that you might encounter…Sometimes we dehumanize them, and we make them into like, a kind of a single dimension person,” Johnson said. “They are obviously regular people, but with backstories that will shock you, make you cry, that you wouldn’t believe.”

After almost five years as a deputy sheriff, Johnson joined the Newport Beach Police Department. She performed a broad array of jobs within NBPD. She served in community relations and as DARE officer, then as a field training officer prior to promoting to sergeant, then supervised the traffic division, special events, and major accident investigations. In 2017, she promoted to lieutenant, overseeing jail operations, the mounted unit, and the Explorer program.

“I had a lot of fun there,” she said. “That’s where I really cut my teeth as a police officer. I was given a ton of opportunities….And a really broad perspective on being a police officer in a community, and what that really means.”

In Laguna Beach, in addition to leading the COVID-19 response, Johnson oversaw both the support and investigative services and field services divisions. Throughout her career, Johnson has also continued her education outside the departments she served, obtaining associate’s, bachelor’s, and master’s degrees with areas of study in Management and Administration of Justice.

Johnson starts work August 8. Her first task, she said, is to get to know her people.

​​”All the good ideas come from the people doing the job,” she said. “It’s not my job as chief, or captain, to come up with a good idea. It’s my job to look into good ideas that are brought to me, and find the ones that are best for the organization. They are impacted by the decisions we make, and so I try to lead with love, and I try to make everyone feel like they are part of what we are doing as an organization.”

Moe said that Johnson’s collaborative approach was a big part of what made her a good fit for Manhattan Beach, both for MBPD and the larger community.

“What stood out was that openness, and that ability to listen and, at times, probably to things you don’t want to hear,” he said. “I got the sense that she’d be open to feedback, and it would take information and not be defensive about it, but really take it to heart and see how things can be improved…People love our police department, they respect our police department, but they also expect to have a dialogue with them. And Rachel is one of those leaders who will easily engage with the residents.”

Johnson, who with her spouse Kathy has three kids —  two teenage boys and an 11-year-old girl — said people can expect to see her out and about in coming weeks.

“I want to get out in the community and talk with them and hear from them, both our residents and our businesses, and with people in the police department,” Johnson said. “I want to know where they think the police department is, and where they’d like it to go. I have some ideas, but again, I try to be the dumbest person in the room, so I want to hear where they want to it go, and I want to hear how they’re feeling about the profession in general.

“My first couple priorities are, one, getting out and meeting people and showing my face. They’ll probably see me running on The Strand in a couple of weeks. I’ll be out and about getting to know everyone, and my folks [at MBPD]. And then figuring out what the next chapter is.” ER