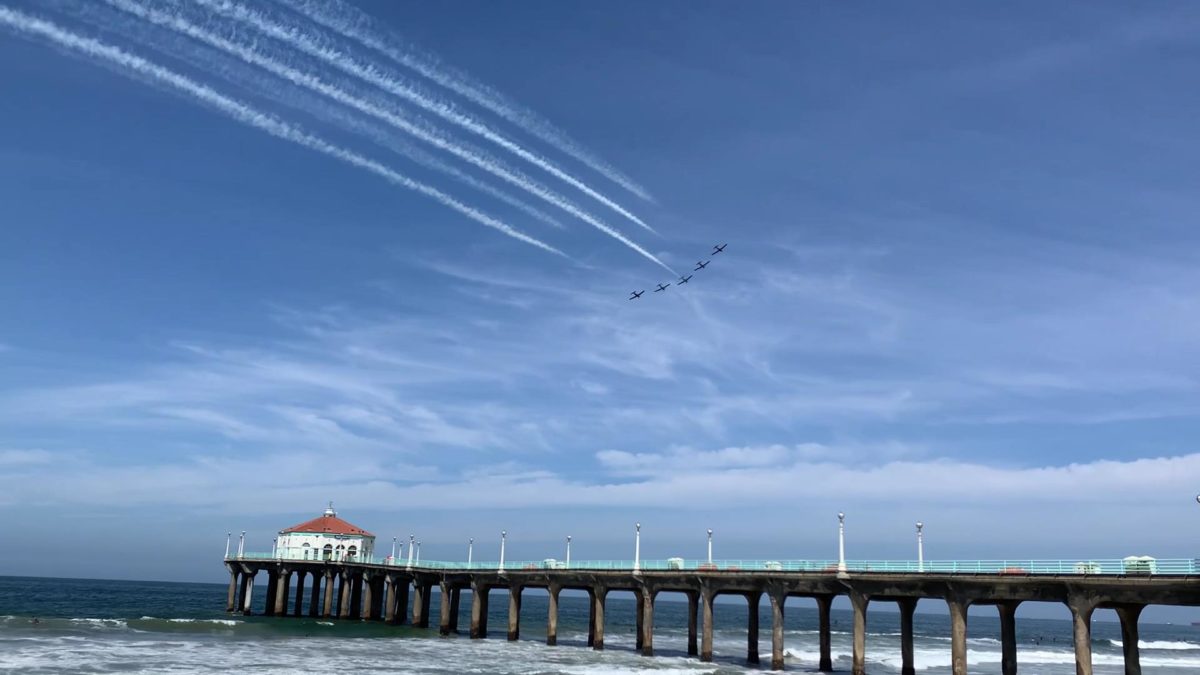 I have lived on The Strand in Manhattan Beach for 54 years, and for most of the last two months I have witnessed something that I have never seen before — hardly anyone on The Strand, bike path, or beach. I have also never witnessed anything out my back door like the near misses, congestion, and stress on Ocean Drive, a 22-foot wide alley that served as the exercise outlet for walkers, joggers, bicyclists, skate boarders, dogs, toddlers — all mixed in with cars and construction trucks.

My husband and I often eat dinner on our ocean-front deck. However, when we ate there during the shut-down, I felt something was missing (despite our unfettered view of the ocean). This week when we were there, I realized what was missing — people. I missed watching the playful interactions of family members, the appreciation shown by those watching the sunsets, and all the other elements that punctuate the lyrics of the “Funny Girl” song, “People who need people are the luckiest people in the world.”

Although we are far from pre-coronavirus “normal,” it is a relief to know that most of the dangerous congestion has left Ocean Drive. It is also heart-warming to know that, as long as we follow the health guidelines, our residents can reconnect with our functional Strand, questionably-unopened bike path, beautiful beaches, and stunning ocean. Welcome back.

Thank you Manhattan Beach City Council (“Manhattan Beach reopens its Strand,” ER May 14, 2020). Many of us older residents can no longer walk in the sand on the waterfront, so The Strand is our exercising place. We have the sense to keep our distance and still enjoy living in Manhattan Beach.

Manhattan Beach Mayor Richard Montgomery publicly declared that “it is imperative that we continue to remind our community in the strongest possible terms that social distancing requirements must be followed.  Those who are not taking this seriously will be cited.”  Manhattan Beach Police Officers were then ordered to issue public distancing citations, with 129 such citations issued in the first weekend to our neighbors and friends.  This story actually made national news, maybe that was the goal.

Ironically, the mayor was photographed violating his social distancing edict while visiting Polliwog Park the first day it opened with signs posted regarding the social distancing requirement. You guessed it, no citation was issued.

Neighbors and friends who received such citations recently received a letter notifying them that  “the fine for your violation is $1,000…please submit full payment to the Finance Department on or before 30 days from the date of this letter.”  But wait, it gets worse.  “An appeal…must be accompanied by a deposit of $1,500 and the full amount of the administrative fine.”  So, the final tally to appeal is $2,500. This is not what our community is about. And, if that’s the due process afforded our neighbors and friends, then we have a serious problem in our City.

I am asking our Mayor and City Council to hit the “Reset Button” and authorize our Chief of Police and City Attorney to cancel all such citations issued and refund any fines or appeal fees posted. Let’s treat our neighbors and friends more respectfully.

Once again, Manhattan Beach makes regional and national news in an unsightly manner with the CBS2 news and the Patch reporting on the $1,000 fines issued for people entering Manhattan Beach parks. It was one thing to issue a citation to the surfer who was belligerent to the police on the beach; but, to a mom with two toddlers and 128 others who arguably were not aware of the prohibitions on entering the parks. It is a black eye for the City; particularly when so many of our local businesses who rely on visitors from outside the City are struggling.

Yes, these are extraordinary times as we wrestle with Covid amongst a multitude of conflicting reports and messages. But, let’s be honest, it has been and remains extremely difficult to know what is allowed and what is not. When parks were first identified as being closed, Polliwog in particular, there was yellow tape and some signage on some of the equipment in the park but not for the park itself. Same with Begg Field.  Later, for about a week, yellow tape appeared around the park and on the south side of Begg Field. But not all parts of the park or field. And signage in the park was inconsistent as to masks and other requirements. The point being, the City has done a poor job of informing the public on a consistent basis and in enforcing any prohibitions. This is not about someone feeling entitled or an act of social disobedience, it is about an honest mistake and the City choosing one day to make a point.

When City Council member Steve Napolitano stated at a recent Council meeting, “We’ve got other crimes of much higher stature going on around town…I don’t think being on The Strand should be considered one at this point.” This same sentiment should apply to the parks as well.  With the much-publicized lack of social distancing on Ocean Avenue and 100s of people on the beach for the bioluminescence as well as this weekend with the beaches opening for “exercise only” yet many folks on beach towels and chairs with no citations, the citations of April 4 and 5 should be rescinded or, if nothing else, reduced to no more than $50, versus the stated $1,000 plus a $1,500 deposit.

It’s time for City Manager Bruce Moe to step up and do the right thing for the small-town beach community we all say we love and are trying to maintain, versus becoming a heavy-handed, bureaucratic, fine happy megalopolis.

And other amazing facts

Less lethal than the flu? That’s just not true. Also, check this out — the earth isn’t flat.

Those who fail to study history…

It’s absolutely astonishing that some people simply don’t realize that the tens of thousands of brilliant epidemiologists, infectious disease experts and other scientists and public health experts around the world, including those working for the CDC, World Health Organization, and other thousands of global state and local level public health organizations, including our own LA County Dept of Public Health, who have dedicated their entire careers to the study, containment and prevention of disease and pandemics based on peer-reviewed science, data and other social and economic “lessons learned,” going all the way back in time to the bubonic plague (which wiped out one-third of Europe), the Spanish flu (which killed approximately 50 million people), and even fairly recent outbreaks such as SARS (another coronavirus, from 2003) — aren’t all just “making things up” as some under-educated, deep state conspiracy theorists and other poorly-informed people still

Cloth masks can’t completely block the small particles that have been shown to help make coronavirus so contagious. What the masks have been proven to do is significantly decrease the radius of possibly-infectious particles people spread by coughing, talking and breathing, which can have a significant benefit in helping to reduce open-air spread of infection, as well as the infection of surfaces in stores and other high-traffic places. So, if everyone wears masks in public, and maintains six feet of social distancing, and avoids close contact with others, and washes their hands, then we can at least begin to flatten the ongoing daily increase in new infections and deaths. LA County still averages 500 to 1,000 new cases and 40-plus new deaths every single day. Those are not ‘seasonal flu averages, which are closer to just five deaths per day. Henry Hancock

Sushi was meant to be bite sized (“Sushi without the show,” ER May 14, 2020). To appeal to the American diner, sushi has grown in size. An early way to judge the quality of sushi bars was to order Maguro, regular tuna, and if it was not up to snuff, you could not rely on the other offerings. One of the things I learned while working at one of the first sushi bars in the valley in the 70s.

To my brother Tony Parente, thank you and your brothers and sisters in blue for your service (“Police march in memory,” ER May 4, 2020). Your passion is amazing and I could not be more proud of you for organizing a march such as this during these unusual and uneasy times. To the active duty officers be safe….keep your head on a swivel and one eye open.