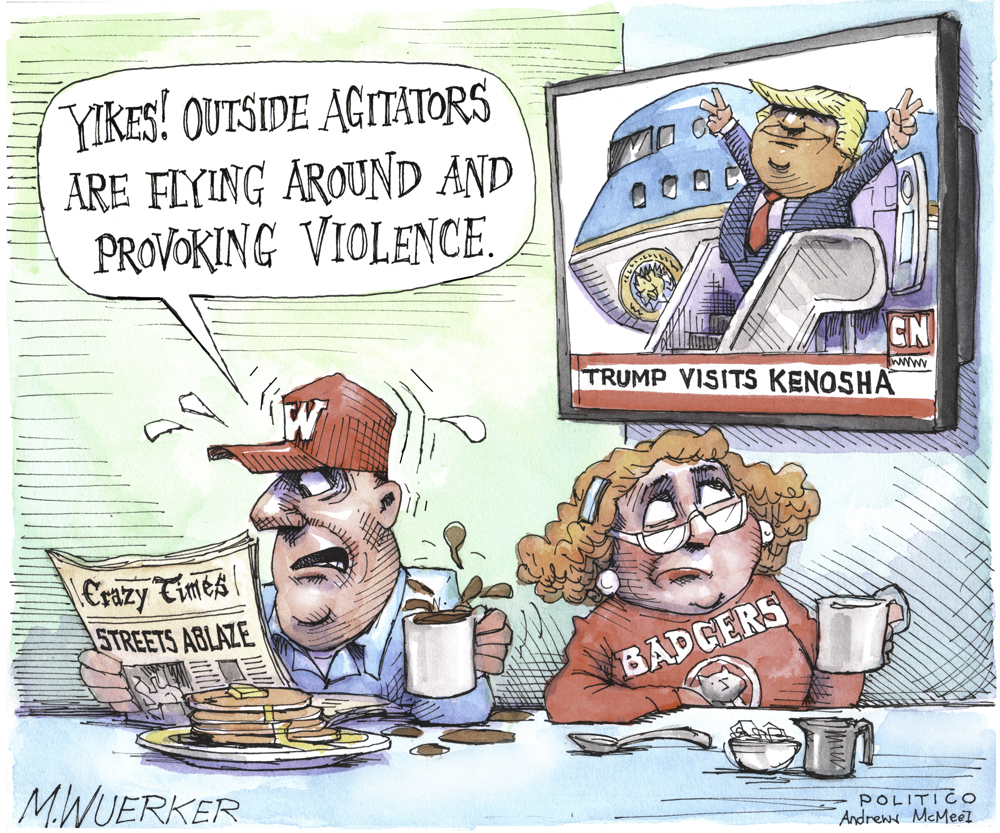 A named Brand
Dear ER:
In his recent online event, (Redondo Beach) Mayor Bill Brand announced that a new public shower had been installed near the hand boat launch in our harbor. He quipped excitedly that “Harbor revitalization had begun.”   Seriously, is that our plan for Harbor revitalization: a shower? The mayor also said in that same meeting that he “loves developers.”  So, Mr. Mayor, where are the development plans you promised the citizens for our harbor and pier area? Do you have a vision for the area beyond the divestiture, dilapidation and austerity we now have? Our quality of life is suffering. Redondo Beach citizens deserve better.
Maggie Healy
Redondo Beach

Neo-classic race
Dear ER:
August 30 would have been the 41st Catalina Classic Paddleboard Race, an epic and traditional paddleboard race of world class paddlers who race approximately 32 miles of open water from the Isthmus on Catalina Island to the Manhattan Beach Pier. Unfortunately, 2020 was the first time in 38 years, due to circumstances beyond our control, we were forced to officially cancel the race.  If the race could have been permitted and safely executed, we would have held it. Especially knowing that it would offer encouragement, hope, and a healthy goal for those struggling to make sense during these challenging times. However, between the importance of standing in solidarity and showing respect for our first responders and the reality that the County made it abundantly clear that no event permits would be issued, we had no choice but to cancel this year’s race. Apparently some individuals chose to paddle the channel anyway and created an unsanctioned event of their own. We want to make it perfectly clear that the “official” Catalina Classic Race organizers did not condone nor have anything to do with this event. It is our hope that the non-permitted actions of these paddlers won’t jeopardize the future of our county-sanctioned, permitted race in 2021. We want the paddling community to know that we’re all anxious to be back next August, stronger than ever, creating the 2021 Catalina Classic, dedicated to Los Angeles County Lifeguard paramedic and rescue boat Captain Steve Troeger.
Stay healthy, keep paddling and watch out for one another.
Buddy Bohn
Hawaii

Perch for a Phoebe
Dear ER:
Growing up in Manhattan Beach, I didn’t pay attention to politics. City Council didn’t feel relevant to my life and I never thought about getting into city government. Even after graduating from Mira Costa in 2015 and as a nursing student at West Coast University, politics didn’t interest me. Then I heard that a former classmate of mine, Phoebe Lyons, is running for MB City Council. I never thought someone my age would do that. It actually made me excited about politics. Phoebe and I went to Grand View together, then Manhattan Beach Middle School and Mira Costa High School. I know she’s smart, driven, and passionate. I know she’ll bring those traits to City Council and that she’s totally capable of getting young people excited and inspired. Phoebe grew up in Manhattan Beach. Now she’ll use her skills to make her hometown even better. I believe in Phoebe Lyons.
Hannah Perch
Manhattan Beach

A history lesson
Dear ER:
Let me tell you about the Manhattan Beach of the 2000s that I know. When the Clintons, a Black Manhattan Beach family, had their home firebombed, 500 of our residents attended a vigil to support them and let them know they were not alone. Our view was that an attack on them was an attack on all of us.  Those who came to offer love and compassion were Manhattan Beach residents, overwhelmingly white. I’ve never been more proud of our community. I believe that if we bring the spirit of that Clinton vigil every day, in every way, we can move forward peacefully when discussing racism. When hurricanes devastated New Orleans and Texas, with Black people being the most adversely impacted, our residents answered the call.  Our residents lined up to donate to the victims of those disasters and we even caravaned in trucks to make the delivery. I believe the vast majority of our residents are accepting, caring and respectful to all.  In fact, our greatest asset as a community is not our weather or our schools, it is our residents and the way they treat people. In the 1980s, Manhattan Beach had a reputation as a racist community, and Black people certainly did not feel welcome.  Just take a look around today, you can see that Black people and people of color are welcomed in our community.  As a community, our residents of 2020 are much more progressive than we were in the 1980s.  That’s a good thing!
Mark Burton
Manhattan Beach
(Editor’s note: Mark Burton is a candidate in the upcoming Manhattan Beach City Council race)

Another history lesson
Dear ER:
I take exception to much of Mark Burton’s Letter to the Editor ( “Miles to go,” ER Aug. 13, 2020).  His statement  that “The best that our community has to offer has been enhanced by the newer residents who moved into our community since 2000”  glosses over about six decades of people who built Manhattan Beach and the surrounding South Bay into a community other than one for the second homes of Los Angeles and Pasadena elite. These were mostly small business owners, engineers and scientists and without them, Manhattan Beach might still be a backwater, unknown to the ‘newer residents’ Burton esteems.

My father, one of those 1950s engineers, could not find a large enough home in Manhattan Beach that he could afford. So, he chose to buy on the inconveniently located Palos Verdes Peninsula.  This was a matter of personal finances, not racism.  Unbeknownst to him at the time, Palos Verdes Unified School District was to turn out some of the finest schools in the state, if not the country. The primary and secondary education there was top-notch. Through hard work,  I got excellent grades and SAT scores that should have meant eligibility for scholarships and student loans to just about any university that would have me.  But those were the days of Affirmative Action and, because my father made too much money (something a little north of $20,000 in 1975) he had to mortgage his house. What is exceptional is that there was no rancor or bitterness, in short no racism. And our family was not alone. Many of my family’s peers were in the exact same boat and we just accepted it. No protests, riots or demands. Looking back, one could even say that I, too, was the product of Affirmative Action. I’ve never even thought in those terms, until these past few months.

Burton’s letter is a cheap campaign trick. By first professing that Manhattan Beach was once racist, but not so much now, Burton then offers his services, if elected to city council, to roust out all vestiges of racism in our community. Choosing to piggyback on a very hot and divisive subject in these tumultuous times is shameless, especially given the area’s real history. But unless he grew up in the South Bay, he wouldn’t know. Never mind the truth, this is just what lawyers do: find an issue, real or imagined, and offer services to fix it.
Publius 2020
Manhattan Beach

More history
Dear ER:
Mark McDermott’s article gave a good outline of the City vs. the Bruces and five other Black families and 19 white families whose unimproved properties were condemned (“Manhattan Beach Council takes in painful history of Bruce’s Beach,”. As for reparations having precedence with the Japanese and the Natrive Americans, these were actual aggrieved parties, not derivatively aggrieved.  Germany and Austria have made payments to holocaust survivors and their spouses. I have found no data on payment to descendants. We are not Germany and Austria. However, that argument could be made against the governments of Ghana, Angola and Nigeria whose ancestors sold fellow Africans into slavery. Next stop, the Hague. On that same principle, anyone whose direct ancestor fought for the Federals and was honorably discharged  or killed outright or died of wounds or disease could make the same claim for loss of generational wealth. Yes, it was ugly but 2.1 million men risked life and limb on the Federal side and 178,893 were colored troops. Of the Federals 360,222 died in the war.  I submit account paid in full by the dead and survivors. 258,000 Confederates died.  Again account paid.  Clean up work done by President Ulysses S. Grant who crushed the KKK until the Democrats took over the south and the KKK resurfaced to harass blacks, Catholics and Jews.  True leaders such as Martin Luther King Jr led us peacefully on a moral platform for justice via the civil rights acts of the ‘60s. JFK couldn’t get them out of committee, compliments of the Democrats. When Kennedy was killed and LBJ grabbed the Democrats by the lapels and  got the job done. I never liked nor voted for Obama but thought it was good for the country, as any black kid could see that he could grow up to be president. Yet, Obama, contrary to a guy like Andrew Young of Atlanta, exacerbated relations between blacks and whites and the fruit I submit is BLM and Antifa. This latest iteration is Manhattan’s Beach. Meet our demands or we will burn the place down.
Mary Emily Smiley
Lawndale