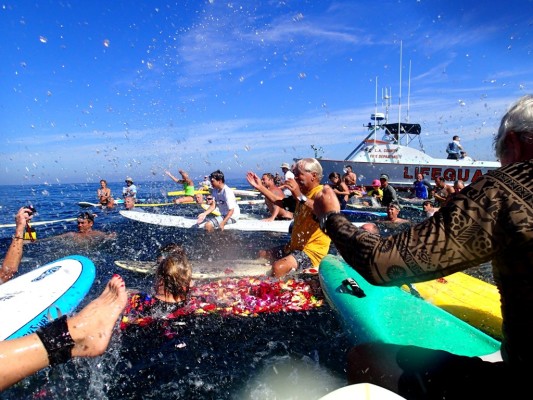 Brad Wilson (right) recalls Nelson promising to see him at the gym Monday, after Nelson reached the Manhattan Beach pier.

Ed Nelson’s fellow lifeguards, fellow members of the South Bay Wheelmen, fellow Los Angeles Peninsula Swimmers and former Adams Middle School students held an early morning “Weed Wackers” bike ride ride and then swam and paddled out at Torrance Beach for a scattering of his ashes in the sea.

Two weeks ago, the 76-year-old retired lifeguard completed the Dwight Crum Two Mile Swim, from the Hermosa Beach to the Manhattan Beach pier, and was heading toward shore when he fell unconscious. On shore, lifeguards performed CPR and on the way to Little Company of Mary Medical Center Manhattan Beach paramedics were successful in restarting his heart. But he never regained consciousness and died two days later.

Heidi and Eric’s two oldest children, Taylor and Kalani, are Junior Lifeguards. Prior to the Pier to Pier Swim, Heidi and and friend DJ O’Brien paddled alongside Kalani and his younger brother Kai in the Velzy-Stevens Pier to Pier Paddleboard Race. That race started at 7:30 a.m at the Manhattan pier and finished at the Hermosa pier. Heidi walked her two boys, Nelson’s grandsons Kalani and Kai, back to the Manhattan pier to cheer in their grandfather at the end of the swim.

Instead, they saw him being placed in a paramedic van.