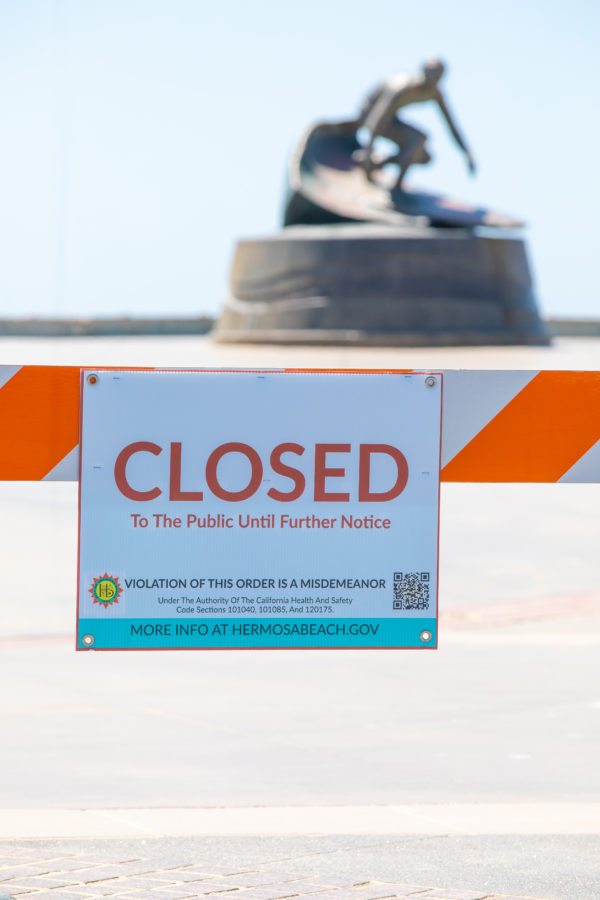 Officials in Hermosa, which owns its beach, say they will not reopen ahead of the rest of the county. Photo by JP Cordero 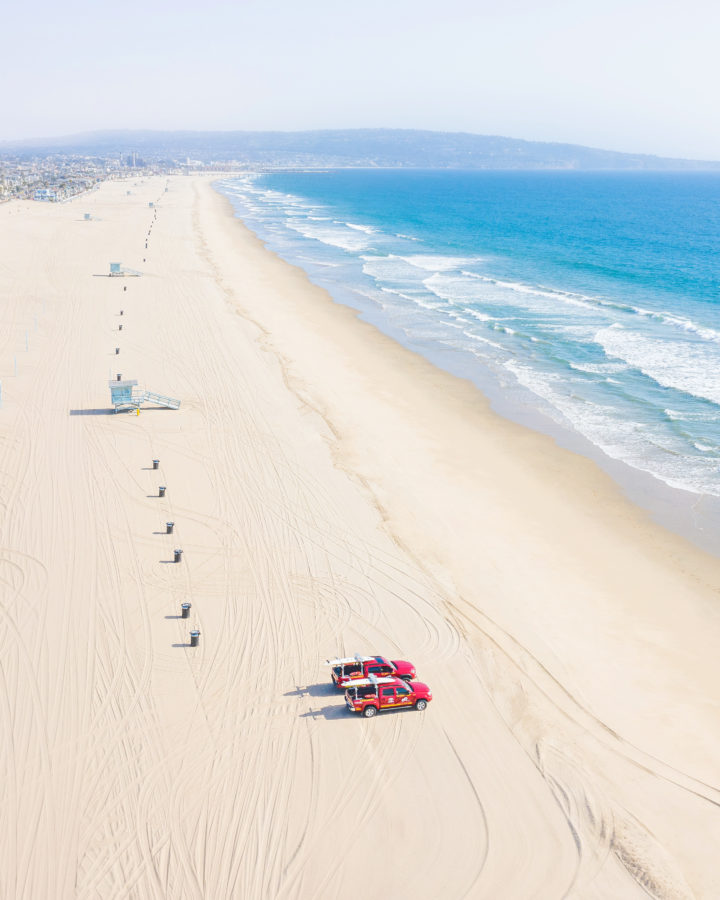 “I was amazed by the lack of footsteps and displacement of sand from human interactions. I’ve never seen the coastline so pristine. A wild sight to see on a perfect beach day.” — Photographer Richard Podgurski (RP-Photograph.com)

Phase One would lift restrictions on all water activities, including surfing, swimming, boating, fishing and paddling. It would allow running and walking on the beach, with social distancing.

It would prohibit “gatherings of any kind,” including volleyball and lying on the beach.

The Strand, the beach bike path, piers and restrooms would remain closed under the plan. Beach parking lots would also be closed, with the exception of lots at Dockweiler Beach in El Segundo and Will Rogers Beach in Pacific Palisades.

No timeline was given for the subsequent three phases, which would end with full reopening of the beaches.

The plan was distributed by Beaches and Harbors to South Bay city councils this week for comment. Beaches and Harbors will incorporate the comments in the plan, which will then be sent to the Los Angeles County Board of Supervisors and to Dr. Barbara Ferrer, the director of Public Health for LA County. Ferrer issued the order that closed beaches on March 28. Her approval is required for the beaches to be reopened. The beaches were closed to slow the spread of the coronavirus.

Redondo is expected to discuss the Beaches and Harbor plan at its upcoming Tuesday council meeting, Mayor Bill Brand said.

Hermosa owns its beach, but has followed the county lead on beach closures. City Manager Suja Lowenthal said Wednesday, “We hope to have a coordinated plan so that all the County’s beaches, including Hermosa’s beach, are opening at the same time.”

Manhattan’s council expressed general support for the plan, but expressed concern about closing the restrooms. City Manager Bruce Moe observed that if the restrooms are closed “people will find alternatives.”

“Will the County clean the restrooms every 15 minutes, every 5 minutes?” he wondered aloud.

Concerns were also raised about enforcement. Moe said the County proposed increasing the number of lifeguards on duty. Though lifeguards do not have citation power, they have been effective in working with the public and can call Manhattan Beach Police for backup, Moe said.

“We knew we needed to work in concert. There needs to be a global plan, from Zuma to Long Beach, with allowances for the differences between the cities,” Brand said.

“It was a lot easier closing the beaches than it’s going to be reopening them,” he added.

He said he did not anticipate Redondo reopening its bike path along Harbor Drive, nor reopening the westside sidewalk along the Esplanade, overlooking the beach, by the May 18 date.

Chris Brown, co-founder of Residents for Responsible Beach Use, said he was pleased the county has set a date to reopen the beaches, but disappointed the date’s not sooner. His group opposed closing the beaches.

Brown noted that other Southern California counties either did not close their beaches, or have reopened them. ER