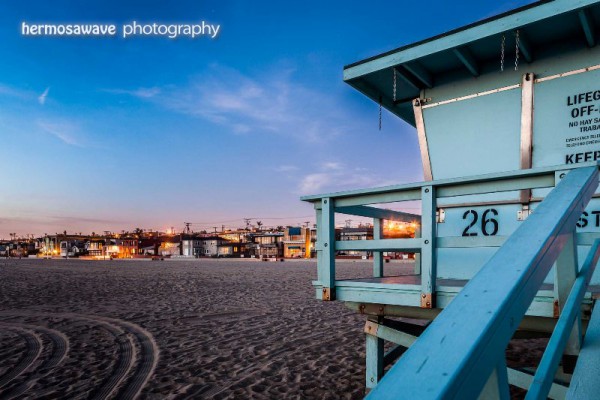 “I started shooting volleyball in the 90s,” said Sofer, who had a second-story office at Pier Plaza for nine years. “I just shot things that were outside my door.”

When he first began taking photographs of day-to-day life in Hermosa Beach he was using one of the first digital cameras. After nearly 20 years of upgrading he’s finally settled on a Canon 5D Mark II.

“When I’d send [film] images to get processed, when they came back I was already over it,” said Sofer, who embraced digital early on. “In 2002 I got what was then a good digital camera and built a website with the gym mindset of ‘once you join you have to go.’ I figured once I have a web site I have to take pictures.”

Almost everyday Sofer took at least one photo around town and posted it onto his website.

“It’s just that colors are what gets me excited— the blues, reds and oranges,” said Sofer, about his plethora of colorful sunset images. “There are always a lot of people that shoot sunsets in Hermosa. A lot of times I see people that I know, but don’t really know. You just see them all the time.”

Because of his almost daily posting, Sofer’s website has developed a cult following. Another thing that brings people to his site is a web camera that he has had mounted downtown since 1997 that points towards The Strand and broadcasts the beach life to people around the world.

“Every time I move it [the webcam] people complain and others complain when I move it back,” said Sofer. “A lot of people have it as their home page and you can tell others have it on all the time. One guy who was a feature film editor told me that he sits in a dark room all day and it’s his window to the world.”

Social networking is also a way that Sofer interacts with his followers.

“One day I walked over to the pier and all these people were shooting the sunset; I like pictures of people shooting,” said Sofer. “In the photo there was this guy in the center that would not move, and after I posted it on the web and tweeted it out this I got a tweet from this guy. ‘Sorry I was in the way, I was taking a time-lapse.’ Its fun when that happens, it just makes us more interconnected.”

Many of his photographs are shot during sunrise or sunset on the local beaches.

“I like transitions,” he said. “Transitions like when land meets water and day meets night. My favorite time is the dusk magic hour when the lights are on and there’s still light outside.”

He spends a good amount of the year organizing his photographs and deciding which ones to sell at the various events around town that he attends.

“I print things that are local and try to showcase Hermosa Beach in that beautiful dusk light,” Sofer said.

His photographs are so local that often times people recognize themselves in his prints.

“I have one photo of the Poopdeck and people have argued about whose bike it is outside,” said Sofer.

An important aspect of his images is not only the subject matter, but the post production and the quality of the printing.

“My introduction to photo shop and printing was when it came as a floppy disk,” Sofer said. “There’s so many photographers at the Fiesta and a lot have good technique but the quality of the printing of their images just isn’t there. You get what you pay for.”

He can spend hours bent over a black and white print comparing one type of paper to another, determining how to tweek the image to make it just a tiny bit better.

“I love realism and vibrant colors,” Sofer said. “I like telling a story but sometimes the story isn’t really obvious.”

Sofer’s booth will be located at the center of Pier Plaza this weekend at Fiesta Hermosa. Prices range from $10 to $1,000 and the sizes start at 5 x 7 inches and get as big as 40 inches wide. Visit HermosaWavePhotography.com to see his work. Visit http://fiestahermosa.net/ for more information on this weekend’s Fiesta Hermosa.ER