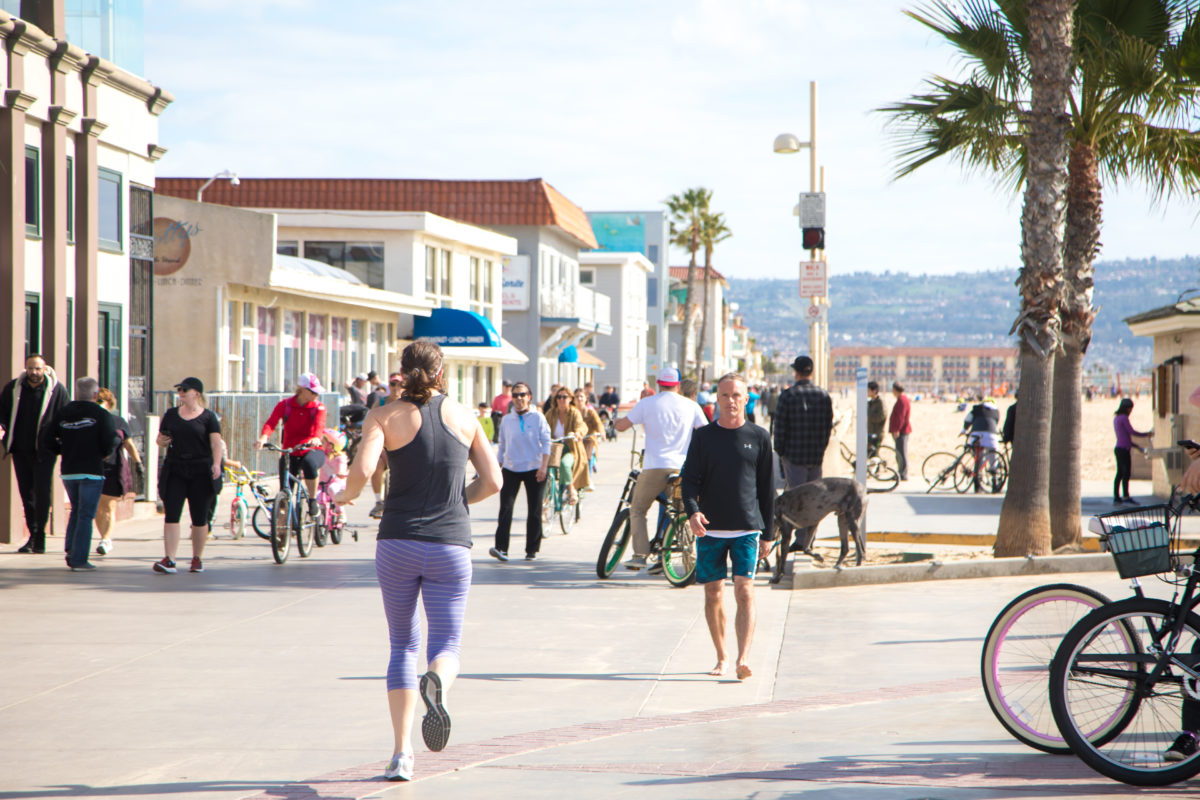 People congregated on the bike path near the Hermosa Beach pier last weekend, something city and county officials do not want to see happen again as they try to stop the spread of COVID-19. Photo by J

People congregated on the bike path near the Hermosa Beach pier last weekend, something city and county officials do not want to see happen again as they try to stop the spread of COVID-19. Photo by JP Cordero

The City of Manhattan Beach today announced that all beach parking lots have been closed due to COVID-19 concerns. Officials from Los Angeles County, meanwhile, are considering closing beaches and bike paths countywide before warmer weather arrives this weekend.

Supervisor Janice Hahn participated in a conference call with local mayors yesterday who all supported working in concert to discourage the kind of congregating that occurred last weekend when thousands ignored the state and County’s “stay at home” orders and flocked to beaches, the Strand, and the Redondo Beach Esplanade.

“What happened last weekend was very concerning,” Hahn said. “Crowds of people gathered on the beaches and especially the walkways. It was terrible. It was really against everything the Governor and the County has been saying. It was my feeling at first we could figure out how to remind people to go home instead of continuing to go [to the beaches]; now there’s a feeling that the only way to really convince people how serious this is, is to flat out close the beaches. We are definitely looking at that.”

Redondo Beach Mayor Bill Brand said that he received numerous complaints about crowding at his city’s waterfront last weekend, particularly on bike paths, which caused him to set up the conference call with Hahn and his fellow mayors. Redondo doesn’t control its bike paths but does control the Esplanade. Brand said no final decision has been made but that a beach closure may be necessary.

“The rest of the country does without beaches forever,” Brand said. “We can handle a few weeks.”

Manhattan Beach is closing its parking lots at the pier, El Porto, and Bruce’s Beach to all except those with residential parking permits. City officials said the action was likewise taken due to the large numbers of beachgoers last weekend.

“I was astounded to see large groups of people gathering this past weekend around beaches across Los Angeles County,” said Mayor Richard Montgomery. “In particular, Manhattan Beach experienced similar activity to a hot summer day where throngs of people came out to enjoy the beach, the Strand, basketball and volleyball courts.”

Hahn said that people appeared to have not understood the public health warnings that have been issued.

“When we said, ‘Get outside, take a walk, get some fresh air,’ we meant around the block, not get in your car and drive down to a recreation area with 10,000 other people,” she said. “So we feel we just have to keep taking these drastic measures to convince people that you really are safer at home.”

The LA County Public Health Department today confirmed 128 new COVID-19 cases and three more deaths, bringing the countywide total to 662 cases and 11 deaths. Included in those numbers were 17 new cases in the South Bay, bringing the total to 61.

Public Health director Dr. Barbara Ferrer said that one of the three deaths reported today was under age 18.

“It’s a reminder that COVID-19 effects people of all ages,” Ferrer said.

“COVID-19 does not discriminate by age, race or income level, and what we are seeing in places like New York is indicative of what we should prepare to experience here.”

New York has emerged as an epicenter of COVID-19 in the United States, with more than 25,000 cases and a sharply upward trajectory that shows a doubling of overall cases now occurring every three days. New York City’s health care system has been overwhelmed. Public health officials point to the exponential nature of the trajectory, or “curve,” the number of new cases over a period of time.

“While Public Health is doing everything possible to mitigate the impact of this disease in our community, we can only flatten the curve if everyone takes social distancing seriously and adheres to all isolation and quarantine orders issued by our Health Officer,” Ferrer said.

Hahn said that Ferrer is “very much all in” regarding the temporary closure of the beaches. She said there is a direct connection between what occurs at the beach and what could soon occur within the health care system in LA County, where providers are preparing for a surge. According to numbers released earlier this week by the Public Health Department, 152 ICU beds are currently available, countywide, and the entire hospital system only possesses 650 ventilators.

Public health officials have tried to convey that “flattening the curve,” staggering the number of new cases that occur over more time, is the only way to prevent the health care system from quickly experiencing a surge beyond its capacity to handle. Ferrer said today that 18 percent of all positive cases thus far in the County have been hospitalized.

Hahn said all social distancing measures are being implemented with numbers like this in mind.

“I don’t think people understand how aggressive and contagious and vicious this virus really is,” Hahn said. “We are making these decisions only after we’ve thought about them through and through, and really understood the consequences. For me, it’s about public health, and stemming the tide and spread of this virus, which we have not been able to do yet. And that’s scary….It’s not getting any better.”

Manhattan Beach Fire Department Chief Daryn Drum said that the message that social distancing is essential does not appear to have sunk in, judging from what’s occurred at the beaches and on the Strand.

“I’ve seen a lot of social media messaging that says please stay at home,” Drum said. “We need to get that out there: that this is real. There are people in our community that just don’t get that yet, and that’s the kind of attitude that is going to allow this thing to proliferate. This is real, and people need to understand that they could contract it, and there’s a very good chance they could take it home to their family.”

Hahn said that closing the beaches only makes sense if all coastal cities within the county do so — some beaches are controlled by cities and a few by the state — so that bigger crowds don’t flock to a beach that would remain open. She praised Beach Cities mayors for their willingness to work together and said that it appears likely the beaches will be closed before this weekend.

In Hermosa Beach, one of the rare cities in the county that owns its beach, officials have been similarly on board with concern about the high numbers of visitors congregating on the sand. Hermosa is also the only city in the Southern half of the Santa Monica Bay where the Marvin Braude Bike Trail, commonly known as the “bike path,” is not separated from The Strand or a similar walking area, making for especially tight conditions. Following the crowding that occurred during the good weather on Saturday, the city issued a public safety alert urging people to avoid The Strand. In a subsequently issued statement, Hermosa noted that the order had not been widely obeyed, and said that “If the crowds continue, further actions, including closures, will be necessary to comply” with state public health directives.

“It is a natural progression for the county to close all county controlled beaches after the Governor closed all beach parking lots,” he said. “If people are unwilling to comply with numerous pleas for physical distancing, beach closure is another opportunity to flatten the curve.”

“We are doing everything else. Why shouldn’t we take this step?” Brand said. “People should know that last Saturday cannot repeat itself. Don’t gather in groups. This all very much depends on how people behave, how extensive the outbreak becomes.”

Weather forecasts are predicting sunniness and temperatures in the mid-60s this weekend, rising to the low 70s by Monday.

Hahn noted that the County also has the authority to prevent access to the water, as it does in cases of toxic spills and shark sightings. She said part of the ongoing discussion includes possibly restricting access to the water, meaning surfing and ocean-swimming would essentially be temporarily banned.

“The beaches can be reopened as quickly as they are shut down,” she said.” That’s the thing about this —  unlike a restaurant or a school, a beach can be closed temporarily, and reopened when it’s safe.”

Brand said the important thing is that local governments are all working together to counter the community spread of novel coronavirus.

“If things calm down, we can reopen the beach,” Brand said. “It’s I’ve always said, I’d much rather overreact than underreact, where people died and the infection curve has jumped dramatically. It’s only temporary. It’s not a permanent condition. We might be glad we did it. We just don’t know.”

“We are just trying to buy time,” Hahn said.

Hospitalization and Death (among Investigated Cases)