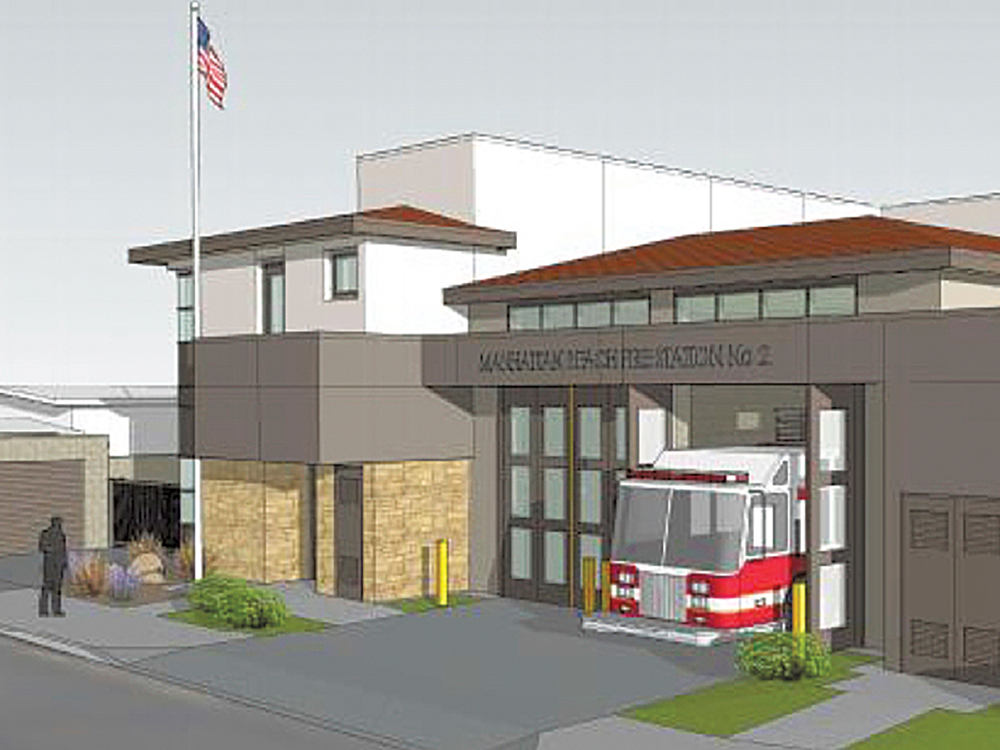 The Manhattan Beach City Council on August 3 accepted an allocation of $8.4 million in American Rescue Plan Act funds, and then quickly put $2 million of it to use —  paying down the debt for the new $9.7 million Fire Station No. 2, a move that will save the City $1 million in debt service for the project.

The funds, part of an $350 billion in emergency funding approved by Congress in March, are intended to help states and cities address economic and public health impacts of COVID-19, and mitigate impacts on communities, residents, and businesses. A report given to the council by Finance Director Steve Charelian showed the City took an $8.8 million hit to its revenues due to the pandemic. Though the ARPA funds have some restrictions, including use as reserves, for pension funds, and directly for debt service, the council accepted the monies as “Category C” funds for “the provision of government services” intended to fill the gap of lost revenues. Though the funds will be used to reduce debt service, this will occur indirectly; the funds —  $4.2 million which were already received, with the balance arriving next July — immediately went into the City’s undesignated reserves, allowing the most flexibility in use.

“If the council wants to utilize any amount of money, it’s no longer going to be ARPA funds because the ARPA funds we are taking in, I want to make this clear… we are going to be utilizing them under revenue loss,” Charleian said. “They’ll end up going into the fund balance, so you’ll have them tonight, if you want to put any money towards a fire station.”

The first action the council took after receiving the funds was to accept bids for the new fire station and allocate up to $2 million of the ARPA funds to reduce the debt service by $1 million over the 30 year amortization period.

“Those funds are meant for public safety, and this is public safety,” said Councilperson Steve Napolitano. “I think this is very basic public safety and at the core of our services to the community. It’s a good use of the funds.”

Other uses for the ARPA funds under consideration include $1.6 million in upgrades to the Polliwog Park playground, a $984,000 new fire engine, and a half million dollars in cybersecurity initiatives.

Resident Susan Bales, an owner of Culture Brewing and the Coffee Bean & Tea Leaf building, questioned the Council’s use of the funds.

“Many of my neighbors desire that this money be used as direct economic support for our small local businesses, the lifeblood of Manhattan Beach. How might we do that? Well, it’s estimated that less than 10 percent of this money could be used to fully fund outdoor dining for a year, or we could allocate money to study and alleviate the parking situation that many residents are frustrated about and which has been exacerbated by the COVID situation. We could reimburse our local restaurants for the over $100,000 in permits the city charged for the outdoor dining structures, also a function of COVID.”

“As far as documents provided to date would indicate, not a single penny of this money is going toward any type of pandemic relief,” she said. “And I find this deeply troubling…The need is incontestable. It is estimated that the restaurants in Manhattan Beach alone took on nearly $15 million in debt to stay open. This doesn’t include the numerous retail offices and other small businesses in this town that are currently burdened by significant loans. Why is this not the focus of our discussion?”

Councilperson Richard Montgomery emphasized that providing government services put at risk by losses in revenue during the pandemic was the intended use of the ARPA funds, which resulted from a lobbying effort emanating from state and local officials, particularly the League of California Cities.

“I commend Director Charelian for making it clear that the city lost $8.8 million to COVID right there, in black and white,” Montgomery said.

Charelian said that no other spending decision regarding the ARPA funds needed to be made immediately but because the City is securing financing for the fire station this week —  at a nearly historic low rate of 2.3 percent interest  —  a decision needed to be made regarding whether to use funds towards that project.

Montgomery made the motion and the council unanimously approved to do so.

“I understand staff’s desire to keep us fluid, even though we have $23 million in cash reserves today,” Montgomery said. “I don’t know what qualifies for emergency COVID, but outside of that…You save a million dollars over 30 years, that’s a plus.”

Another proposal floated regarding the new fire station was to eliminate the construction of a temporary fire station near Begg Pool in Polliwog Park, which would cost $600,000, and instead center all MBFD operations out of the downtown fire station. MBFD Chief Lang estimated this would increase response times by about a minute on the eastern most side of town, but that this could be addressed both through increasing fire patrols on the east side and utilizing mutual aid. Council will consider that proposal at one of its next two meetings. ER