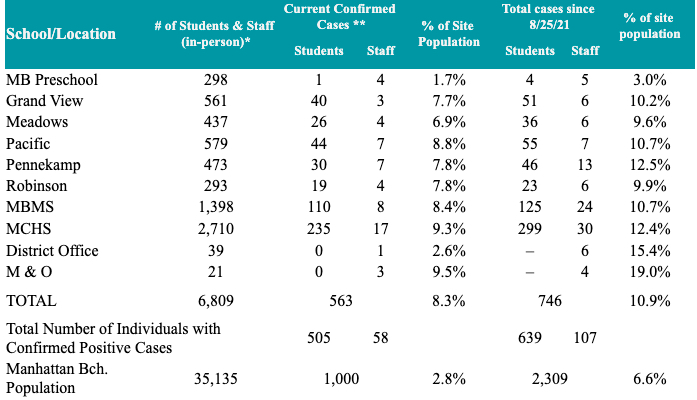 A comparison in MBUSD attendance before the pandemic, last fall, and since the Omicron surge.

A comparison in MBUSD staff absences before the pandemic, last fall, and since the Omicron surge.

The Manhattan Beach Unified School District continues to grapple with an unprecedented surge in COVID-19 cases that by this week included nearly eight percent of all students and employees, though the actual number is almost certainly higher due to lags in test results.

Yet, according to reports presented during the Board of Education meeting last week, attendance numbers remain surprisingly robust and are even improving. Testing lags are expected to diminish in coming weeks as the company that administers MBUSD tests adjusts to the demands of the Omicron surge.

Assistant Superintendent Suzanne Webb, who oversees Human Resources and Student Services, told the school board that the increase in attendance is in part due to changes in the Los Angeles County Department of Public Health’s quarantine guidelines.

“I’m loving the numbers for this week so far because it looks like it’s going down,”  Webb said. “But I’d have to say that the guidelines for quarantine and isolation have loosened up a bit, and that has helped us bring employees back, especially those who are asymptomatic, or who are testing negative after having tested positive for COVID, so they are coming back sooner.”

In a more typical school year, of course, these numbers would be troubling. Average daily attendance in pre-pandemic times was usually above 96 percent. During Jan. 2020, prior to the pandemic, 98.4 percent of students were in attendance. But given the fact that schools across the nation have returned to remote learning, and the largest nearby district, Los Angeles Unified, is experiencing 66 percent attendance rates, MBUSD’s numbers are relatively strong.

Administrators expressed concern that the below-normal attendance could have adverse financial impacts, because state funding is dependent on Average Daily Attendance (ADA). Those who are not able to attend school on campus, or who are not comfortable doing so, have been encouraged to take advantage of the district’s independent study program.

“I just want to mention to the community how important attendance still is,” said Christina Giguiere, MBUSD director of student services. “Yes, stay home if you have symptoms, and of course stay home according to all of our guidelines. But attendance and especially fulfilling your independent study contracts is really important. ADA, when we look at funding, is based on the number of total days of student attendance divided by total days of instruction. We still have 180 days of required instruction, so we do want to do what we can to get those numbers up because it will impact funding in the future.”

Assistant Superintendent Irene Gonzalez-Castillo emphasized the importance of utilizing these options, not only in terms of ADA funding, but for educational purposes.

“We are really charged as a district…to make sure students are continuing their learning, whether they’re in person or at home,” she said, while also asking parents to be patient with teachers who are adding short-term independent study to an already large workload.

Webb followed up on this latter point, her voice shaking with emotion, as she thanked employees for working through incredibly challenging times.

“I know we probably can’t say it enough to our staff, especially our employees who are not only monitoring their own symptoms, their own families, but dealing with absences in their classroom, maybe being a close contact in their classrooms, and then dealing with the quarantine and isolation guidelines, which have have changed like three times since December 31,” Webb said. “Everyone’s just doing the best they can, and the administrators are doing the best they can, and I just want to thank them all…That’s the level of commitment we have in our staff.”

School board president Sally Peel praised how MBUSD has made keeping its schools open possible, but also said that the duress teachers and school districts face is indicative of a larger problem, beyond the pandemic.

“I’m so appreciative of the Herculean effort being made by our district, and districts across the country, to make in-person schooling available for our schools,” Peel said. “There is, in my opinion, definitely a systemic problem about the way we value teaching that is part of the equation. I will admit that what is top of mind for me is what’s right in front of my face, which is what’s going to happen at school tomorrow in MBUSD. I want what’s best for our students and our teachers and our staff. But I do think that the challenges we’re facing are part of a larger issue, and has to do with how we value education in our country.”

Jim Reid, representing Malibu Medical Group, the firm that conducts on-site COVID-19 tests for MBUSD, gave a report to the board explaining why there has been a delay in getting test results. The firm only began doing public health testing to help local school districts 16 months ago in the hopes of getting kids back into school, with a special focus on athletes. MMG normally does testing for about 300 people daily but a glitch occurred January 2 —  the day before school resumed after winter break —  in which testing sign-ups were supposed to close at 8 p.m. but didn’t. Overnight, 1,400 people had signed up, and MMG is just now getting caught up. Results usually are returned within 48 hours, Reid said.

“So we made a mistake. We did our best,” he said. “Our providers worked the next 48 hours, calling 120 positives. So we felt like we were still pushing forward, but we just couldn’t catch up. The labs that day, from us and others —  they have 152 schools they work with —   and there was just a surge in results from the samples that came in that night.”

Reid said things have since normalized and the test results are again coming back within 48 hours.

“I don’t know how it happened, but somehow along the way schools, who are woefully underfunded, became health resources for entire communities,” Peel said.  “It’s crazy. And you all stepped in and provided something that we weren’t prepared to do in order to get athletes back on the field, and to get kids just functioning back in a setting with their peers.”

Peel, in an interview, circled back to the extraordinary challenges everyone is facing during the Omicron surge, specifically teachers.

“It’s a hard time for them, because many of them are parents, so not only are they concerned about the work that they need to do, and the well being that they experience when they’re in the work environment, but also they have children, or family members maybe getting sick, or needing to quarantine,” Peel said. “And that’s a struggle for them. I’ve been amazed by that. I mean, my daughter’s in 8th grade and one of her teachers is posting the most amazingly detailed class notes every day. And the reason she’s doing it is because she knows that some kids are out on quarantine, some kids are out because they have COVID….And this teacher herself had to go out on quarantine for a few days because her child had to. So that’s extra work for that teacher, and she’s doing it.”  ER