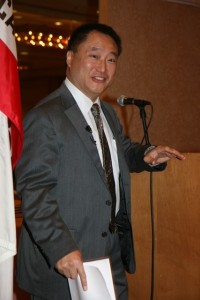 A photo at the beginning of Mayor Gin’s “State of the City” slideshow Monday morning showed a throng of people on a sailboat beneath the title of mayor’s address: “Pulling Together: On Course for Recovery.”

If this was a before-and-after kind of shot, it might have showed the same boat with a few less people, and those remaining dipping oars in the water. The city of Redondo Beach in the last year endured difficult economic times, requiring employee layoffs and an across-the-board six percent pay cut that was voluntarily accepted by all those who remained.

Gin acknowledged as much as he outlined the $10 million dollars that has been trimmed from the city’s budget since the economic downturn began. Those reductions include $4 million in salary cuts, $3.7 in program cuts, and $2.3 million in staff positions eliminated.

“This is $10 million in savings, and the numbers you are seeing don’t really show you the complete picture,” Gin said early in his address. “They don’t show the sacrifices that were made by our city staff.”

Another slide showed a projected $500,000 dip in property tax revenue – the first decline in more than a decade – from $19.1 million last year to $18.6 this year. Sales tax revenue, meanwhile, is projected to decline for the second year in a row, from $10 million two years ago down to $8.5 million this year.

“This shows very boldly what has happened,” Gin said. “The mantra of shopping Redondo is critically important.”

Gin said he chose the “Pulling Together” theme to reflect recent economic difficulties and how the city has responded.

“In many ways, it is emblematic of what has occurred in the last year,” the mayor said. “I don’t think any of us will disagree that the last year was an extraordinary year.”

The mayor’s address, which was hosted by the Redondo Beach Chamber of Commerce at the Crowne Plaza Hotel, emphasized the progress he said the city was making on several fronts. He offered two simple priorities as the city proceeds.

“Number one, keep our budget balanced,” Gin said. “But number two, make sure we are moving forward and make sure we position ourselves very well for the recovery that will occur.”

Gin noted that the city – with enormous help from a private fundraising campaign – has begun construction on a new North Branch Library that should be completed by late summer or early fall. A transit center made possible by federal funds is being constructed near the new Target store in the north of town, as well, and South Bay entrepreneur Mike Zislis will begin construction of a 52-room boutique Shade Hotel in the city’s harbor later this year.

And while the economic downturn cost the city a prime sales tax generator, Mervyns, that store has already been replaced by Kohl’s, Gin said. The mayor’s announcement that Nordstrom Rack plans in 2011 to open a store nearby, just south of the Galleria Mall, drew the biggest response of the morning – several whoops and a round of spontaneous applause emerged from the otherwise subdued early morning audience.

“We hear the gasps of joy in the shoppers!” Gin said.

Other capital improvements include Inglewood Avenue street resurfacing and a water recycling and runoff diversion project at Alta Vista Park. Both are part of the $5.2 million in federal stimulus funded projects that are currently underway in the city.  The city has also proceeded with resurfacing the Esplanade, rebuilding fire-damaged Wilderness Park and installing solar lighting on the North Redondo Bikeway. Police have been newly equipped with mobile data computers and automatic license plate readers. Public-private partnerships, Gin said, have refurbished the city’s historical museum and the athletic facilities at Alta Vista Park.

“What I want to convey to you is despite this deep economic downturn we’ve had, these are all the things we were able to get done,” Gin said. “…You look at that list and it’s pretty remarkable what we have been able to accomplish.”

The mayor gave the annual Lifetime Community Service Award to Lorraine Geittmann, a former Daily Breeze reporter who later became a parole officer and who has served as a city commissioner, civic watchdog, and, most recently, as the president of the Friends of the Redondo Beach Library organization.

Geittmann, a 45-year resident of Redondo Beach, said she was proud to accept an award that has been given to some of the most accomplished figures in the city’s recent history.

“I can’t imagine being in the company of such wonderful people, such as Ron Cawdry, Marilyn White….This really is an honor,” Geittman said. “I’m overwhelmed.” ER