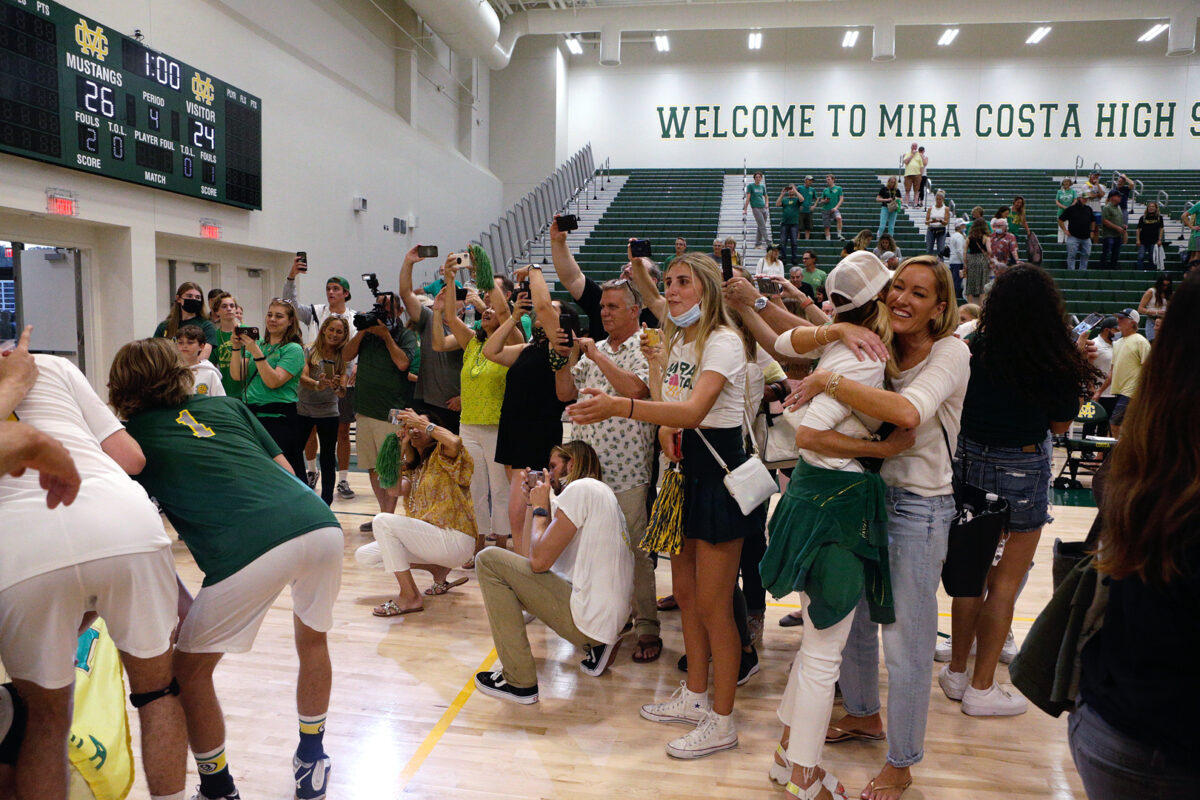 When the Mira Costa boys volleyball team lost the first set to Loyola in the regional championship game Saturday night and then were tied 11-11 in the second set, Coach Avery Drost called a timeout and implored his players to go back to basics.

“He told us to calm down, stay in our system and settle into our game plan,” senior outside hitter and team captain Ben Coordt recalled. “Loyola was playing really well and had a lot of momentum at that point.”

The Mustangs took their coach’s advice. And then Coordt, the team’s best player all year, took over for the most important stretch of the game.

Riding the momentum provided by Coordt, the Mustangs snatched the second set 25-18 and leveled the match at one set all. More importantly, they served notice to a very good Loyola team that they were not going to be able to waltz into Costa’s brand-new Fisher gym in front of 1,500 roaring fans and take home the coveted CIF Division 1 SoCal Regional Championship.

The Mustangs kept it going by winning the third set 25-18, but stumbled when they took a 23-19 lead in the fourth set. They clung to a 24-23 lead when Coordt hit a kill shot that was blocked for a Loyola point to level the match at 24-24.

“We took our foot off the gas,” Drost said. “We wanted to glide to the finish line but couldn’t do it. We had to fight hard for the last two points.”

Coordt, knowing he had cost his team a chance to win with his blocked shot, made up for it with his next kill shot.

“He hit a chisel shot down the line for a winner that really showed a lot of control and poise,” Drost said. “That was a really tense point, the most intense point of the entire match.”

Now leading 25-24 with a match point to their credit, the Mustangs turned to senior Cole Collins, who slammed a serve to the Cubs middle blocker, who dug it out but just missed hitting a winner by a couple of inches.

And suddenly, a week after winning their first CIF championship since 2012, the Mustangs were now state champs.

Although it was their last match of the year, there could be still more honors coming soon to the Mustangs.

“I don’t want to get ahead of myself, but Max Preps will put out their final national rankings in a few days, and I think there is a good chance we will be ranked as the national champs,” Drost said. “The California champ is usually ranked very high nationally.”

Even if they’re not national champs and are only CIF champs and SoCal regional champs, Drost said he knows he and his players had better celebrate their accomplishments while they’re still fresh in the community’s mind.

That’s because he has 18 seniors graduating this year, and only four varsity players – none of them starters – returning for next season.

“Expectations will be much lower next year,” he said. “But I think we will exceed expectations once again.”

As for Coordt, he will be playing the same position – outside hitter – at UC Santa Barbara next year. But his heart will always be with the Mustangs he led to such inspiring victories.

“The Costa class of ’21 is such a special class,” he said. “This was their gift to the Beach Cities volleyball community. People here have been celebrating winning CIF for a week, and now it looks like they’re going to keep on celebrating right into the summer.”