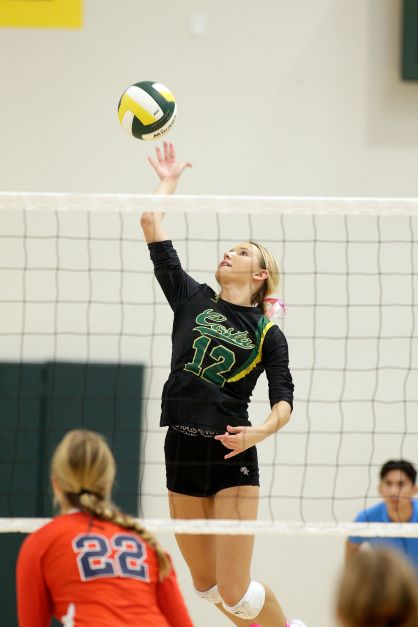 Senior outside hitter Drew (Lizzo) Wright (pictured two weeks ago against Redondo) ripped a couple of cross-court winners, and then finished the first game against Lakewood off with a monster block. Photo by Ray Vida

One down, two to go.

That was the situation facing the Mira Costa girls volleyball team Tuesday night after it dispatched Lakewood in the first of three pool games it will play over the next two weeks in its quest to get Coach Cam Green his first CIF title as a head coach. 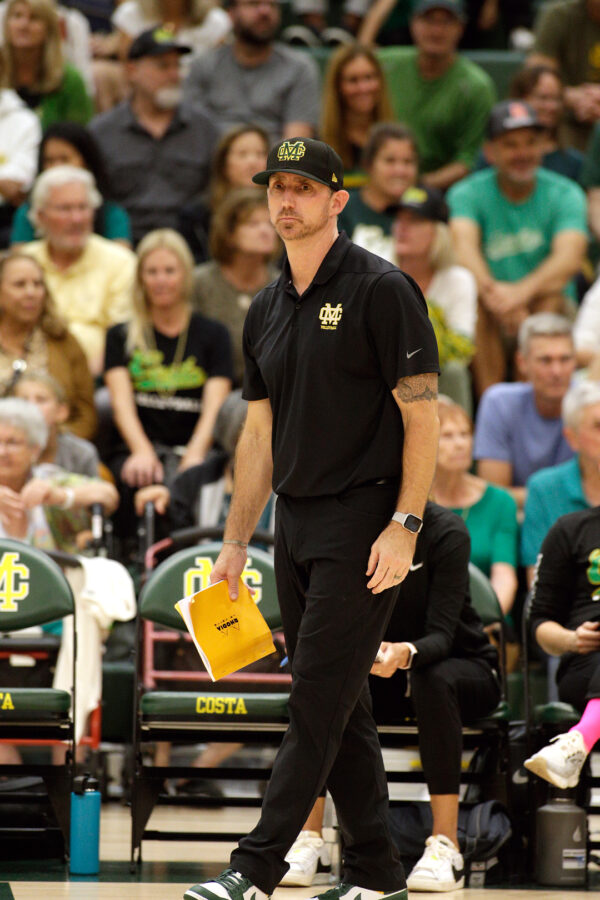 There are two pools of three teams each in Division 1. The winner of each pool will play the winner of the other pool for the CIF title.

Although the Mustangs are top-seeded in Division 1, there are no pushovers at this stage of the season. Lakewood came in to Fisher Gymnasium with a 28-7 record, just a bit behind Costa’s 34-3 record, and proved it belonged in the Division 1 playoffs by taking a late lead in both of the first two games.

The Mustangs started the night with a completely healthy squad, but by the time the match was over, two key players — junior middle blocker Bryn (Menace) Shankle and junior Chloe (Donuts) Hynes – were on the bench with ice bags on their swollen ankles and crutches nearby if they wanted to stand up and walk around.

But Mira Costa has such great depth this year that as long as superstars Charlie Fuerbringer and Tanon Rosenthal remain healthy and able to do their blocking, smashing and serving thing, the Big Green Machine will just keep rolling along.

On this night it was senior Erin (Effortless) Inskeep who stepped up to fill the void and made it look, well, effortless.

“Erin played a lot all year, so she was ready for this moment,” Coach Green said moments after the match ended.  “And tonight she gave us exactly what we needed when Chloe and Bryn went down.

As for the two wounded warrior’s availability for the Mustangs’ next pool game against Palos Verdes on Tuesday Oct. 25, Green said it was too soon to tell.

“Both of their ankles are swollen pretty good right now,” he said. “We’ll just have to wait and see if they’re ready to go next week after they get their treatment.”

Regardless of their ability to play against PV, he said, the Mustangs will face a major challenge from the team that finished second to them in the Bay League.

“We beat PV twice during the regular season, but one match went five games and just about every game in both matches was a two-point game,” he said. “We know they’re a very tough team, well coached and with great athletes. As soon as I leave here tonight I’m going to start studying and preparing for PV.”

After playing PV at home Tuesday night, they will then host Santa Ana Mater Dei Saturday night in their last pool game.

When Lakewood pulled ahead 17-16 late in the first game, Green called a timeout and rallied his troops. And right on schedule, Fuerbringer was due to serve and started a 5-0 run to get Costa a 21-17 lead. Shankle was hurt on a collision near the net on the next point and limped off the court to cheers from the predominantly Costa crowd. After senior outside hitter Drew (Lizzo) Wright ripped a couple of cross-court winners, she then finished the first game off with a monster block.

The second set was more of the same, with a proud Lakewood squad falling behind by a score of 11-5 and then roaring back to grab a 15-14 lead mid-way through the set. This time it was Tanon Rosenthal who came to the Mustang’s rescue, unleashing a couple of powerful kill shots and then, just when the Lakewood liberos were hanging back to give themselves a chance at digging her Scud Missiles, she feathered a soft, sharply-angled cut shot that put the Mustangs back on top 19-15.

Again Lakewood rallied to tie the game at 20-20, but from there the Mustangs were simply too good and put up another 25-22 win.

By the time the third set started, Lakewood’s body language looked defeated and the Mustangs raced out to a 10-3 lead. This time there was no comeback, no rally from way down, and the set and match felt over when Fuerbringer had three consecutive monster blocks on Lakewood’s outside hitter. It was such an impressive display of dominance that the student section began chanting “Who’s your Daddy?” at the Lakewood player and it somehow felt appropriate.

After the match Green said he and his players had talked every day of the season about how winning CIF was their goal all year.

“We have been 100 percent focused on winning CIF since the last ball dropped last season,” he said.

They lost in the CIF semifinals last year. This year they look like they’re going all the way – as long as Charlie and Tanon stay healthy. Contact: teetor.paul@gmail.com. Follow: @paulteetor ER