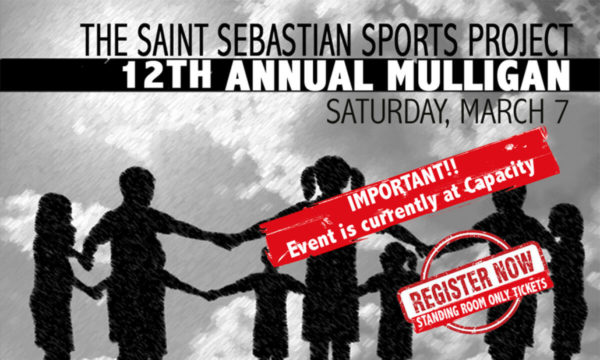 The Mulligan event poster for its March 7 event, which sold out.

A guest at a standing room only fundraising event hosted at American Martyrs O’Donnell Hall March 7 has tested positive for COVID-19, according to a statement released by the non-profit organization which hosted the event.

The annual event, called The Mullgan, is fundraiser benefits the St. Sebastian Sports Project, a grassroots non-profit founded by American Martyrs parishioners Clare and Jim Gurbach in order to provide sports equipment, uniform, and training to kids who attend less advantaged Catholic schools. The Mulligan is the non-profit’s signature event, and sold out this year, with an estimated 250 people in attendance.

Clare Gurbach sent out a letter to St. Sebastian supporters on Monday.

“We want to report that we have just learned that a guest at our March 7th Mulligan fundraiser has tested positive for COVID-19,” she wrote. “There are other guests with symptoms being tested at this time. The guest that tested positive did not exhibit symptoms on the evening of the event. We are grateful to them for alerting us, particularly given that they were not experiencing symptoms during the event.”

A spokesperson for American Martyrs said that it appears the person who tested positive did not attend any masses at the parish church either the weekend of the Mulligan or subsequently. American Martrys Church masses have since been suspended, due to state and county orders banning gatherings of 50 or more people, but are being live-streamed daily at 8:10 a.m. and Sundays at 9:30 a.m.

This year’s 12th Annual Mulligan, which has helped the St. Sebastian Sport Project grow to the point where it now provides help to more than 60 schools in both the Los Angeles area and Denver, Colorado. The event was hosted by NBC sportscaster Fred Roggin.

“While we know there are many places people could have been exposed before and after the Mulligan as this virus has developed, we wanted to make sure you have this information as soon as possible,” Gurbach wrote. “The health and safety of anyone who participates in any SSSP event is of great importance to us.” 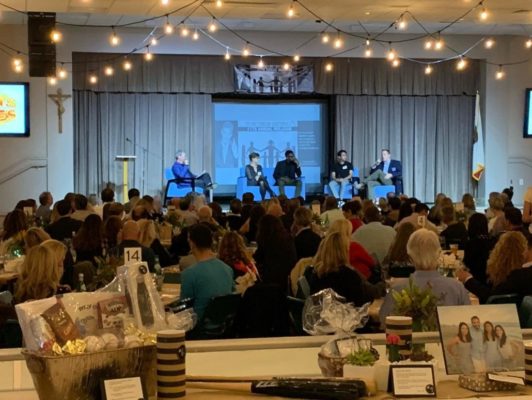 Such incidents of possible exposure have been at the forefront of LA County health officials’ messaging. LA County Public Health Director Barbara Ferrer has cautioned that reported cases are likely to spike in coming weeks because social distancing measures were only implemented in the last week.

“As there are more people who are infected, it means there are more people that will get infected,” Ferrer said. “This does not mean that our efforts at social distancing are not working; if you look across the world it generally takes between three and four weeks for us to see the fruit of our labor.  So we all need to continue to do all the social distancing measures that we have implemented until we see that we have in fact peaked, and we start seeing less and less cases.”

That peak, Ferrer said, is most likely weeks away. She emphasized that the incubation period for COVID-19 is 14 days.

As of Wednesday, four cases were confirmed in Manhattan Beach by the County Public Health Department. Countywide, 190 cases have been confirmed, with 10 thus far reported in the South Bay, although yesterday’s numbers did not include three cases just confirmed at the Kensington Redondo Beach assisted living facility. The County makes new case announcements once a day.