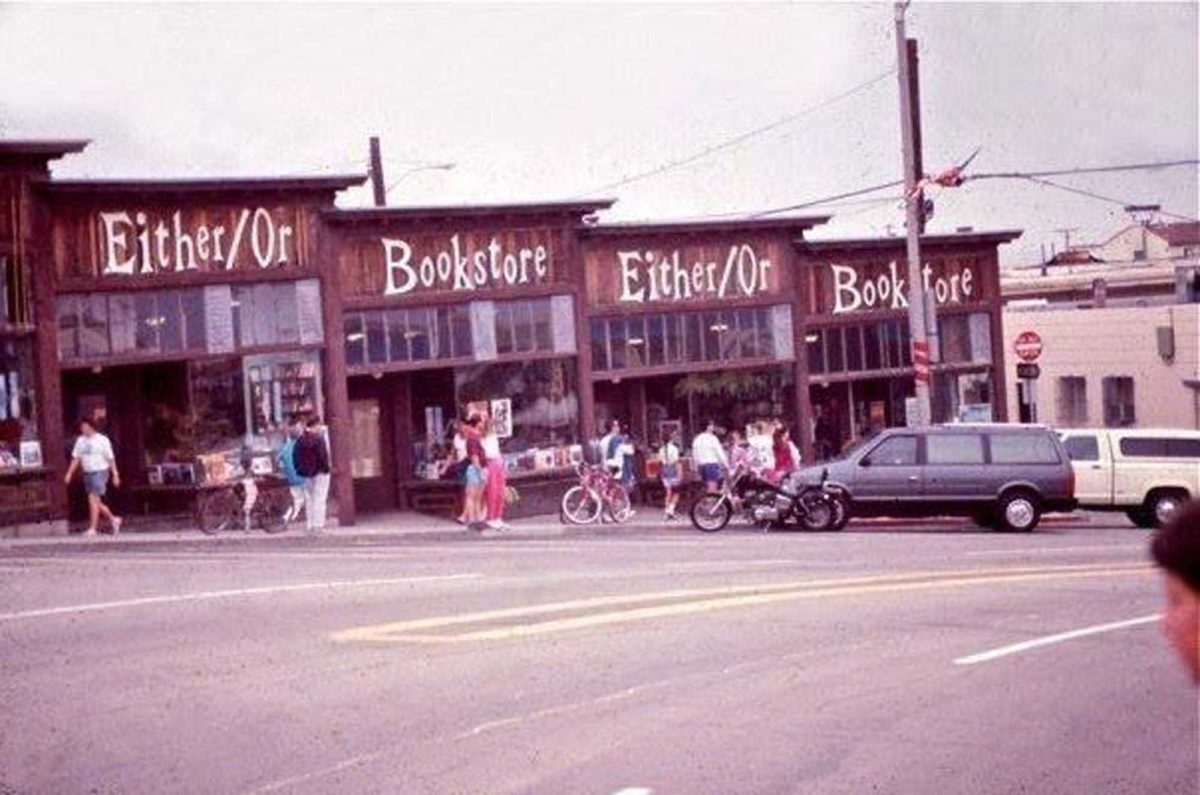 An undated photo of the Pier Avenue storefront of Either/Or Bookstore. The store’s Hermosa location closed in 1998. Photo by Cormac Dorsey

One night in 1962, Hermosa Beach resident George Schmeltzer took in a production of Edward Albee’s “The Sandbox.” To see it, he didn’t have to trek to Hollywood or downtown Los Angeles. He didn’t even need to go east of Hermosa Avenue. Schmeltzer saw it at The Insomniac, a cafe, bookstore and folk music venue on what is now Pier Plaza.

Today, visitors to Tower 12 or American Junkie are more likely to stumble upon a DJ or the NFL Sunday Ticket than a contemporary absurdist drama. That such high-brow, low-margin fare would now seem out of place is yet another facet of Hermosa’s transformation over the decades. But the latest entry of the Hermosa Beach Mural Project is an effort to remind people that the town once vibrated to a quirkier beat.

The Mural Project board announced this week that its ninth entry will honor Hermosa’s history of bohemianism and counterculture. The board is expected to finalize a request for proposals for the mural later this month, but Schmeltzer, a board member, said the mural is likely to include three of the city’s “iconic” venues: The Insomniac, The Lighthouse Café and Either/Or Bookstore. After evaluating responses, a board committee will select an artist, who will paint the mural on the west-facing wall of the south side of the Beach Drive alley off Pier Plaza, on a building currently containing Waterman’s and the Surf City Hostel.

The Mural Project, a local nonprofit group that set out to put up 10 paintings in 10 years depicting facets of Hermosa history, is closing in on its goal. As the project gets closer to completion, there is a bit of pressure to make sure that its finite selections represent the town’s colorful past.

“We’ve heard many times about doing the Insomniac and Either/Or,” Schmeltzer said.

The Mural Project watches the response generated by exhibits put on by the Hermosa Beach Historical Society, and Schmeltzer recalled seeing people pack the Hermosa Museum for an exhibit on punk rock, featuring flyers from shows of decades past. He said that it inspired last year’s mural selection, on punk rock and skateboarding, the unveiling of which drew the project’s largest crowd yet. A past Hermosa Museum show on the Insomniac drew a similarly engaged audience.

“People turned out. It really says that Hermosa has this countercultural history. Those of us who have been around for a long time have always known about it. And the newer residents have heard at least something about it. It really captures something that is Hermosa,” Schmeltzer said.

Hermosa’s connection with freethinking intellectuals predates the establishment of the city itself: a section of the town’s northern edge was once a budding literary colony called “Shakespeare’s Beach,” and “Shakespeare Beach” or “Shakespeare Tract” still appear in legal descriptions of Hermosa properties filed with the county assessor’s office. But the link isn’t always obvious to newer residents or visitors, and it’s the Mural Project board’s hope that people passing by will see the mural, and Google “The Insomniac” or “Either/Or,” both of which are long gone. (The Insomniac closed in 1963; Either/Or left Pier Avenue in 1998.)

Less imagination will be needed for the Lighthouse, which is still around, right next door to Waterman’s. The historic venue was a West Coast beacon for jazz acts. As bebop and the Beats became intertwined, people started making their way to the beach to escape some of the stifling conformity of the 1950s.

According to a 2007 story in Easy Reader, Insomniac founder Bob Hare came to Hermosa from Orange County to see a production of Arthur Miller’s “The Crucible,” then he popped in to the Lighthouse to catch some jazz. Afterward, he noticed a “For Rent” sign on what was then a shoe store on the other side of Pier Avenue. In its brief tenure, the Insomniac hosted Dave van Ronk and Bessie Smith, and was reliably packed till 3 a.m. with chess games and poetry readings.

Either/Or, named for a work by proto-existentialist philosopher Søren Kierkegaard, opened the next decade. The store took up what are now several storefronts on the south edge of Pier Avenue, filled to the brim with books. Patrons included notoriously reclusive novelist Thomas Pynchon and poet Charles Bukowski, who would do off-the-cuff doodles on coasters and the store’s copies of books he’d written. Adam Malovani, a Hermosa resident and history buff who last year debuted the Experience GPS Walking Tour, which documents Hermosa’s musical history, said that among longtime residents he interviewed, Either/Or was the place they were “the most heartbroken, the most nostalgic” about losing.

Malovani’s tour features extensive interviews about performances at the Insomniac and the Lighthouse, but narrator Joe Nolte notes that there is nothing around to commemorate the former. Malovani said he was excited that the Mural Project was giving the Insomniac its due, even if it required some tweaking to Experience GPS’s narration.

“The only bummer is, I have to update my tour again,” Malovani joked.