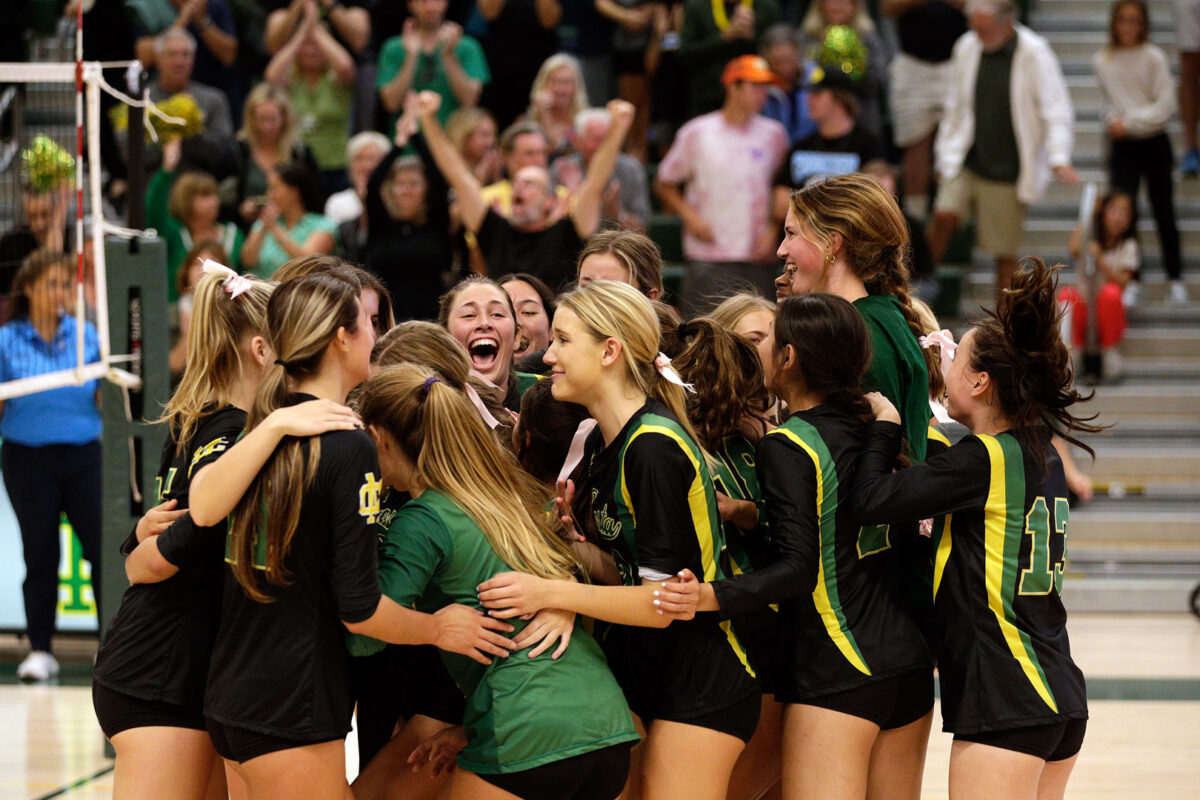 Real men don’t cry – unless they’ve just watched their girls volleyball team pull out a five-set thriller and advance to the CIF Finals next weekend.

Then it’s okay to shed a few tears of joy and relief.

That’s why Mira Costa Girls volleyball coach Cam Green gave an honest answer when he was asked if he was indeed crying while his ecstatic team celebrated their win over Mater Die just a few feet away.

He wasn’t the only one gripped by the emotions overflowing in Fisher Gym Saturday night. 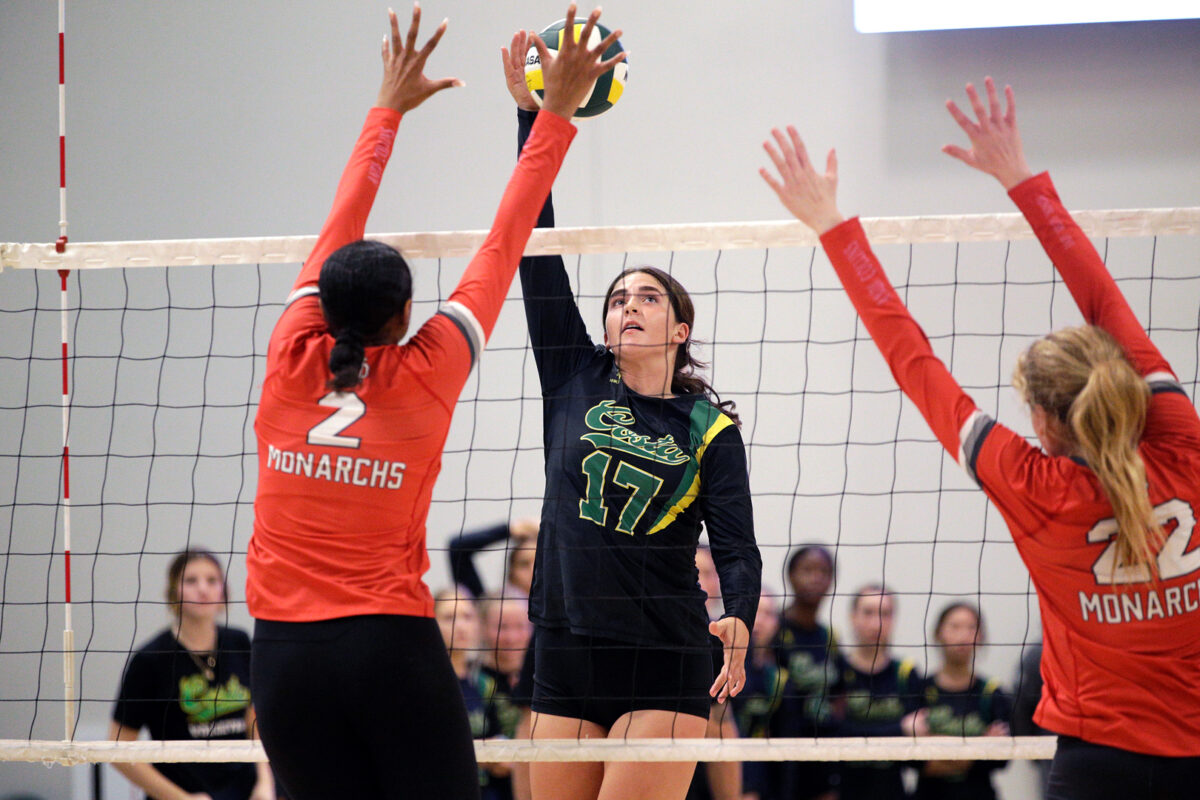 A packed home crowd had just watched the Mustangs recover from losing the third and fourth sets to win a dramatic fifth set, and give Green a chance to win his first CIF title over Sierra Canyon next Saturday night at Cerritos College.

And if they do go on to win CIF, this memorable match will be seen as the steppingstone that prepared them mentally and physically for the ultimate victory.

Because at the end of the fourth set it looked like the Mustangs were done for the year. It would have been an ignominious ending to a spectacular year in which they went 36-3.

As the anxious crowd tried to cheer the girls on, Green gathered them around him on the bench and somehow found the right words to transform their losing body language into the winning form they had displayed during the first two sets, which they won 25-22, and 25-20 before mysteriously losing the third and fourth sets by 20-25 and 22-25. 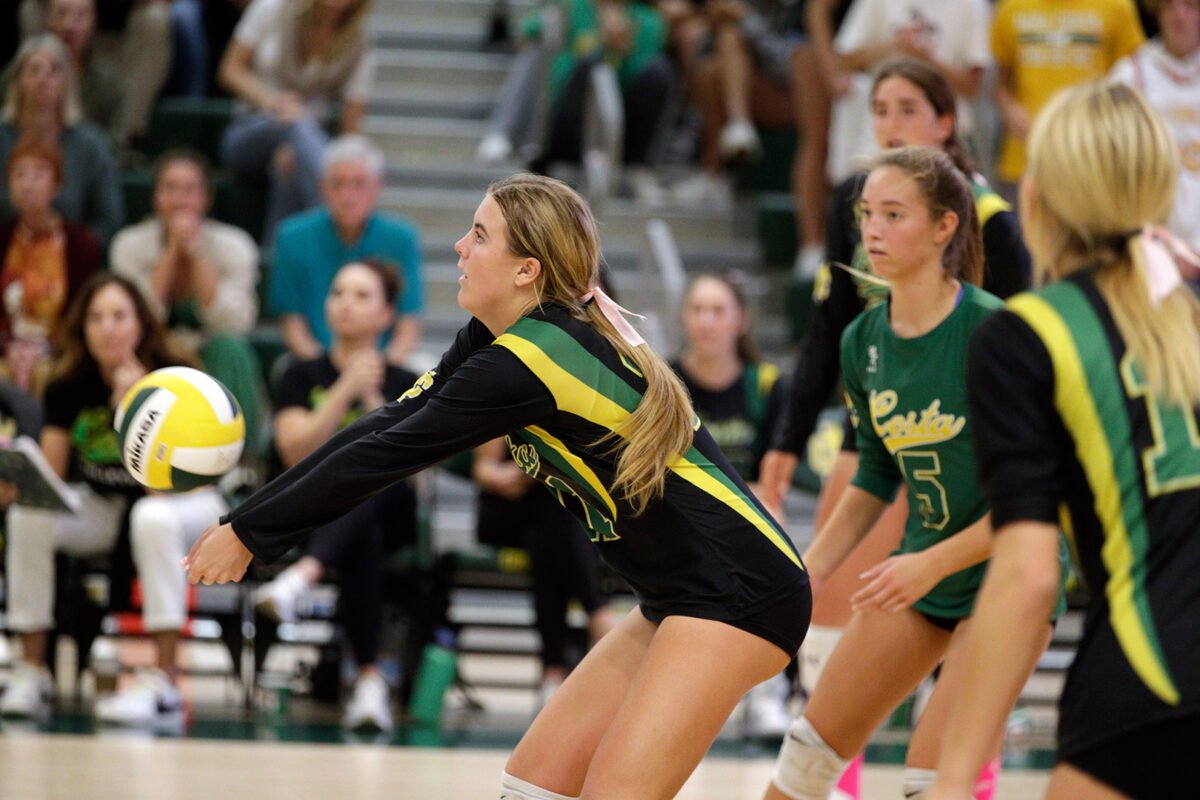 Erin Inskeep has played a crucial role in the CIF playoffs.

The decisive game opened with a long rally finished off with a Drew (Lizzo) Wright kill down the right sideline, and suddenly that winning feeling was back in the tension-filled air. Two Scud Missile kills by Tanon (Aquaphor) Rosenthal got them a 6-4 lead, and with the crowd screaming on every hit, setter Charlie (Chunk) Fuerbringer unleashed two down-the-middle kills that got them some breathing room at 8-4.

Another great rally marked by two sensational digs from Taylor (Baby Gorgeous) Deckert was finished with a Drew Wright kill and suddenly Costa was within hailing distance of the long-awaited trip to the Finals.

Rosenthal displayed her brilliant versatility by hitting an off-speed cut shot that drew a shank and followed that with a classic nuclear-strike kill that got the Mustangs to match point at 14-9.

With the entire gym standing and screaming in anticipation of the final winning point, Mater Dei proved its toughness by winning the next two points and cutting the lead to 14-11.

But the match ended on an appropriate note with Wright – who emerged over the course of the playoffs as the Mustangs third star, shining just as brightly as Rosenthal and Fuerbringer – rising high above the net and hammering a kill that drew an errant shank.

Now it was all over but the shouting and the screaming.

And the crying too.

Because it turns out that real men do cry – but it has to take something really special.