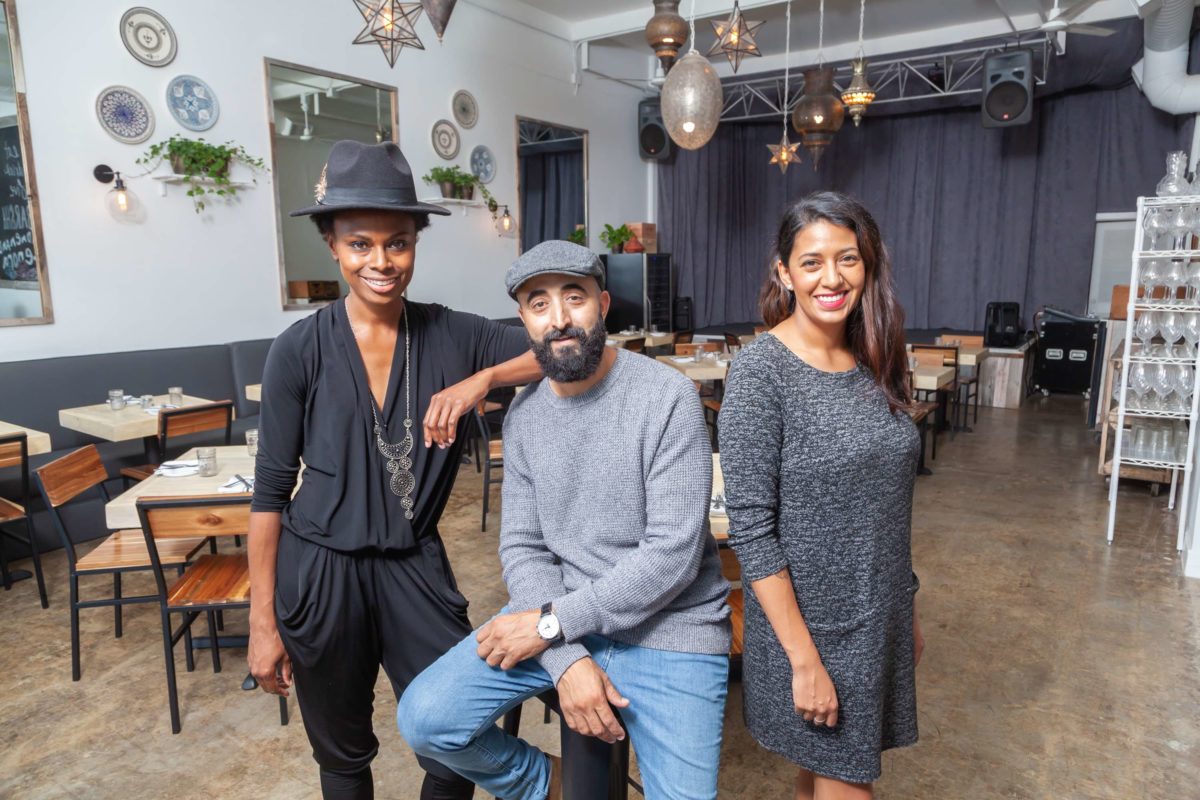 Adnen and Lenora Marouani accomplished their dream when they opened a wine, spirits, and specialty store. The previous wine shop in that location hadn’t done well, but after years of high stress and long hours working in restaurants, the young couple was ready for a change and a challenge.

“I love wine, drink wine, study wine all the time, so we decided that when we moved to the South Bay and started a family, we didn’t want a restaurant,” Adnen said. “When the opportunity came to buy Sepulveda Wine Company and we saw they had a tasting room license, so we could serve wine, cheese, and charcuterie without being a full-on restaurant, we said, yeah, let’s do it. Fewer hours, less stress.”

Their popular Barsha, next to the 31 Flavors on Sepulveda Boulevard in Manhattan Beach, takes its name from an Arabic word that means “a lot,” or “many.” In Adnen’s native Tunisian dialect Barsha has a connotation of abundance of food and hospitality. If you’ve visited the store you know how appropriate this is. Adnen is everywhere welcoming guests, urging them to try a bit of an unusual cheese, vegetable relish, or cured meat. He was perfectly happy with this role when a chance conversation launched the couple’s lives in a new direction.

“I was in the barbershop next to Big Lots, in this strip mall at Prospect and Aviation. The barber is a regular customer at Barsha. He suggested I look into Suzy’s, because the place was for sale. It was a dive-bar-ish place, but with a loyal following because of the music. I figured we could keep everything about it that was good, make it into place where you can bring your kids, your family, with good music. Lenora and I, we take chances when we see a great opportunity. We thought we’d never go back to the business, but the restaurant business was in our blood, and we came back.”

People who only know the Marouanis from their wine store are often surprised to find how accomplished they are in the kitchen. Adnen started out young, working as a dishwasher before becoming a fry cook. “I peeled a lot of potatoes for french fries back in those days,” he remembers. He worked his way up to a job running one of the kitchens at Caesar’s Palace in Las Vegas, and on his very first day there met a striking young lady named Lenora, who was also a new hire. I’ll let her tell her story herself.

“I started with culinary school at LA Trade Tech and worked at PF Chang’s and the Ritz-Carlton at Marina del Rey. I moved to Las Vegas to work at Restaurant Guy Savoy at Caesars Palace, and met Adnen at orientation. He was working at the main kitchen and I was at a different restaurant, but we kept in touch and started a relationship. We paid our dues for two and a half years, but then we wanted to come home and open up something together. For a while I worked as a private chef for a Lebanese millionaire and Adnen worked as the wine director at a Kosher restaurant in LA. We opened Barsha because we wanted to get out of the restaurant business and start a family. Now we’re living our dream and doing this together.”

The new Barsha restaurant is a remarkable transformation of the dim Suzy’s. The white walls are decorated with folk art and North African-style, pierced tin lanterns. The bar is well stocked with wines, beers, and low-alcohol mixed drinks. About the only thing that hasn’t changed is the stage.

“If we had pulled out the stage, we could have fit in 10 more tables. That stage isn’t going to make as much money as 10 tables. But we are very much into our community, and that community loved Suzy’s. I tell them, the name may be gone, but the stage will be here, and so will the Tuesday open mic. Bring your friends, sing for them, or do whatever you do.”

On most evenings the music won’t start until 9. The earlier dinner crowd will be offered a unique menu of North African-inspired California cuisine. It’s based on the Tunisian cuisine that Adnen grew up with, and he says it’s very different from what Californians know as Arabic food.

“Tunisia is at the tip of the tip of Africa, a center for shipping in the Mediterranean, so we absorbed a lot from different cultures over thousands of years. The flavors have something in common with the South of Italy, the South of France, Spain, Portugal, and also the Arabs, but they came in late. Before them were the Berbers, the native people, the Romans, and others. It’s a blend of all those cultures, with the spices of Tunisia.” 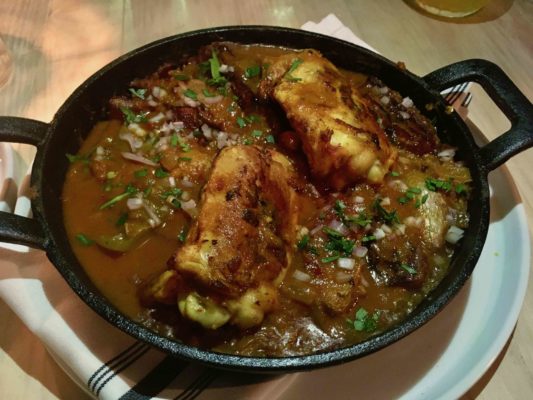 The Berber-style chicken at Barsha is served in a turmeric sauce with roasted tomatoes. Photo by Richard Foss

“I was born in Tunis, the capital. If I was just cooking what I learned at home, anybody who grew up there could taste it and know. On the menu we have mussels La Goulette, named after a little fishermen’s town that is now part of Tunis. Fishermen love their cold lager or pilsener beer, and they steam their mussels in beer. We Tunisians also love capers, and so putting tomato broth, mussels, and capers together is what we do.”

Lenora, who is running the kitchen, has had plenty of opportunities to taste the home cooking that Adnen rhapsodizes about.

“I’ve had the opportunity to go to Tunisia numerous times and cook with his mom Zina  in their kitchen, and I’ve seen the love she puts into every dish. They come out beautifully because she loves her kids and grandkids, and you can taste that love when you eat her food. It’s a blessing to cook this food that is so connected with Adnen, because I didn’t grow up with that. I grew up with a single mom and she learned how to cook as we grew, but to learn the connections that Adnen’s mom has with food is a beautiful thing.”

“What we’re doing here is incorporating their spices and cooking methods, but it’s a more refined way of executing it. I have French influence in my cooking techniques, Adnen has Italian roots, and we use what we know about flavors. We’ll keep the integrity of farmer’s market ingredients and stay with the seasons. In Tunisia they have a more limited variety of vegetables, and you might say that what we’re doing is enhancing California vegetables with Tunisian spices and ideas. We are using a condiment called mechouia that is traditionally made with Anaheim chillies and tomatoes roasted together with olive oil and spices. Their Anaheim peppers are less spicy than the ones we have here, so we use a mix with poblanos, but we try to be true to the culture.”

That sounds good to a Californian, but does it suit the most important Tunisian in the couple’s lives?

“Zina is open to all sorts of ideas as long as it tastes good, as long as the end product is something the family will enjoy. I’ve experimented sometimes and when necessary she’s been real about letting me know it didn’t work, but she has done it with love. Her theory is that if the family loves it, it’s OK.”

As supportive as she is of the restaurant, there are limits to Zina’s help. Adnen says she’s not enthusiastic about using technology to teach new  recipes.

“I called my mom and said, please, let’s facetime, I remember some of the things you used to make when I was a child. You and the neighbors made desserts and took them to the grocery store to sell them, and I want to see how to do them. She said, ‘Nope. This technology, this Ipad, I won’t do it. I have to be there with you and doing this thing.’”

Zina will be coming over soon to teach Adnen, Lenora, and the rest of the kitchen staff the secrets of the Tunisian cooking. Adnen plans to have some special events while she is here so locals may share the authentic experience. He’s also planning wine dinners, no surprise since he has such an appreciation for the stuff. It might come as a surprise that though Tunisia is a Muslim country, they have a long winemaking tradition.

“In Tunisia we make a lot of wine, and 99 percent of it is consumed there. There are a few producers who make things that are very high quality, and the rest of it is a good Tuesday table wine. The juice is good quality, and skilled winemakers can do anything with it. There was a big scandal in the late 1800s when Tunisia was a French colony. They had a wine shortage because there was a disease among their grapes. Some merchants bought barrels and barrels of wines from Tunisia, blended it in Bordeaux, and shipped it to London saying it was French. Nobody knew for a long time, because it was still good wine.”

The couple is busy with plans for events, for specials, for ways to show off this unlikely but alluring fusion that they’ve brought to a shopping center whose anchor tenant is a Big Lots discount store. Adnen is serenely confident about the concept being adopted by locals.

“We feel this pocket of Hermosa really needs some love. We’re going to give them good food and beverage and keep the music, starting with Friday and Saturday nights, Sunday brunch, and Tuesday open mike. We want to integrate with the community that loves what was here, but sometimes take them out of their comfort zone. We will have the flair and spice of Tunisia, some Mediterranean dishes and a little that is Middle Eastern-ish, and the California sensibility, and they will come together in a way nobody has seen before.” B