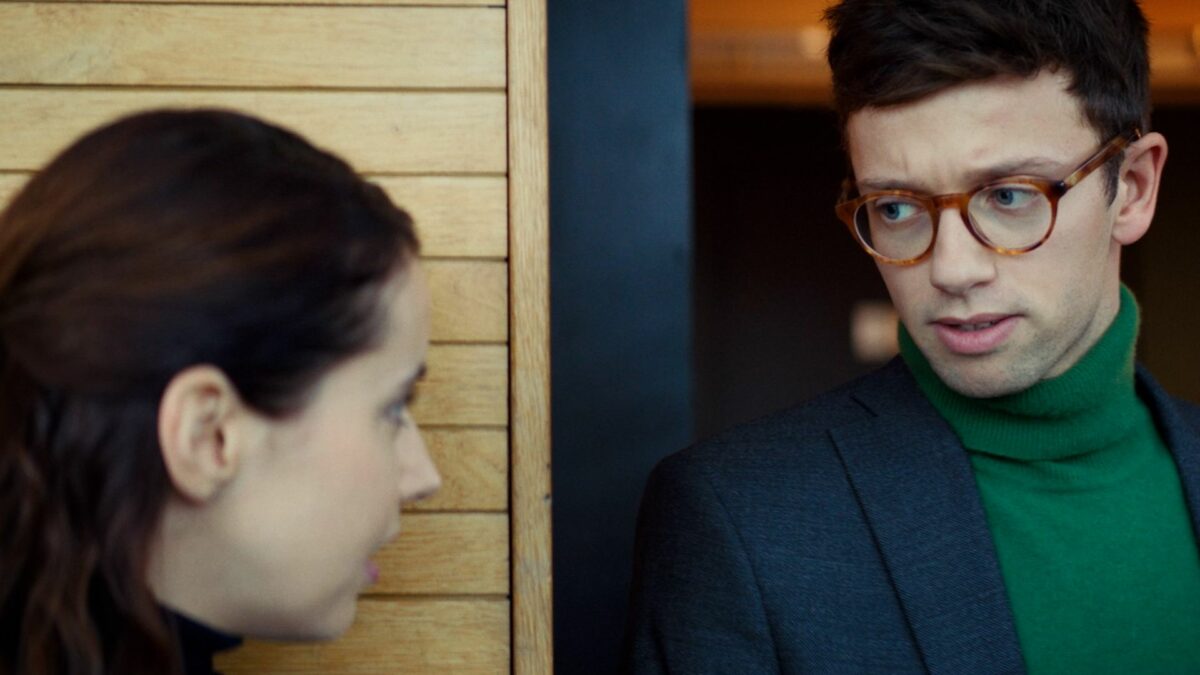 Liz Kingsman as Rose and Xavier Lacaille as Samy in "Parlement." Photo courtesy of Topic.

“Parlement” is a new political comedy centered in Brussels at the headquarters of the European Union. Written by an international host of writers based on an original idea by Noe Debre, “Parlement” is a humorous take on governmental dysfunction at a global European level.

Naïve young Samy has just arrived from Paris to take up his job as the assistant to Michel Specklin. He’s staying in a youth hostel and knows absolutely nothing about what he’s supposed to do or how he’s supposed to do it. Specklin is an incompetent petty functionary, a Member of Parliament (MEP) who sees his primary duty as avoiding all work and any professional contact at all cost. He immediately empowers the hapless and ignorant Samy to be his placeholder on the fisheries committee. This committee is the true embodiment of “the smaller the stakes the more vicious the fight.”

Eamon, whose job it would seem is to herd the cats, assigns Samy the task of writing 25 amendments to the latest fisheries proposal. Not realizing who his friends are (he doesn’t have any but doesn’t yet realize it), he takes the suggestions of an Italian he thinks is an MEP. He’s not. He’s a lobbyist looking out for the interests of whomever is paying him at the time. Samy downloads the suggested amendments found in a Google search. They certainly don’t fool Eamon who lets Samy drown in this mistake before he is able to kill them all (which was the point in the first place). 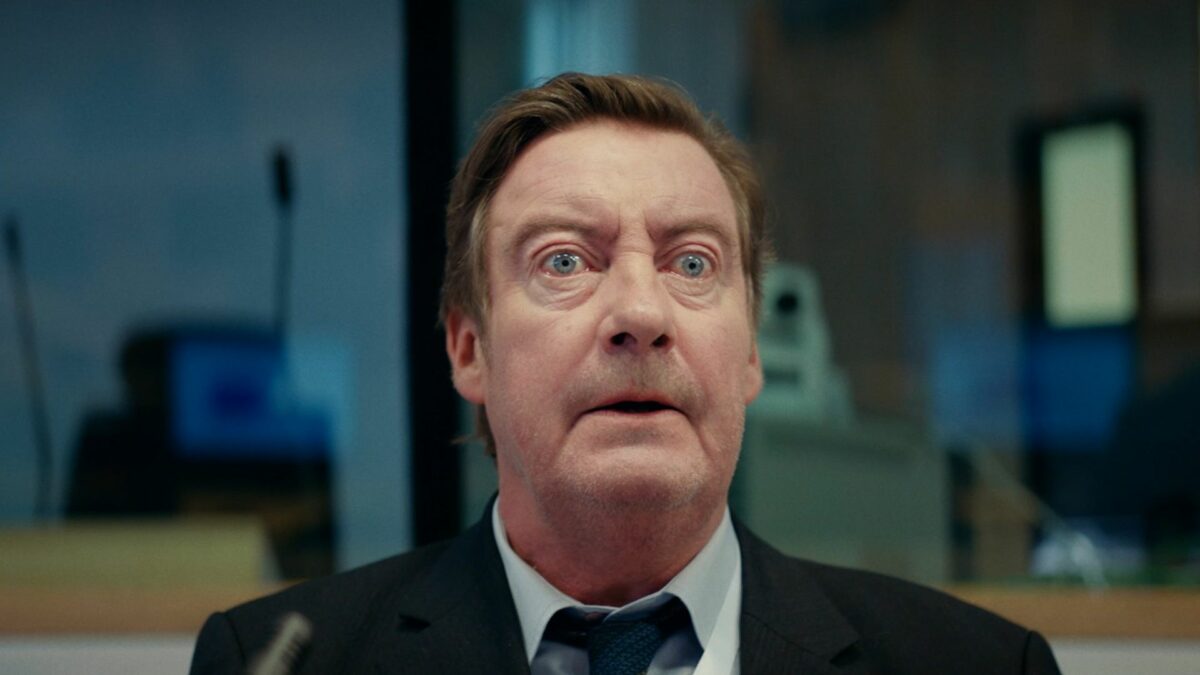 Before he knows it, Samy is assigned to write a report on finning, the process by which sharks are caught, their fins are cut off and sold to the Chinese market and the bodies discarded in the water. Samy’s proposal to ban this barbarous act should be a no-brainer. And that is where you would be wrong. Internecine warfare breaks out within the committee. The Spanish, primary proponents of this practice, depend on the revenue it generates. But within the Spanish contingent on the committee there are the Catalonians who despise the Spanish and block anything the Spanish want. The Germans, led by the dreaded and brilliant strategist Ingeborg, are in favor of the ban. It is Ingeborg who suggests that Samy use the two sides from Spain against each other to gain enough votes.

And of course there are the British, as represented by Sharon Redlion who used to be a Tory until she started immersing herself in internet conspiracy theories, going from Tory to the UK equivalent of QAnon. She is wildly in favor of Brexit, although she has no idea what that actually means. Lucky for her she has a savvy and mature assistant in Rose who makes sure that her insane MEP stays out of the way.

It is the assistants who must hold it all together and there is an inverse relation between the competence of the MEP and that of the assistant. Both Samy and Rose work for dolts and are, therefore, quite bright and know, or in Samy’s case learns how to maneuver around the obstacles that are their MEP’s positions. Torsten, Ingeborg’s assistant, is a not too bright, totally unsympathetic bully assigned by her to spy on Samy. She has a plan for Samy that will unfold over the six episodes of this first season. 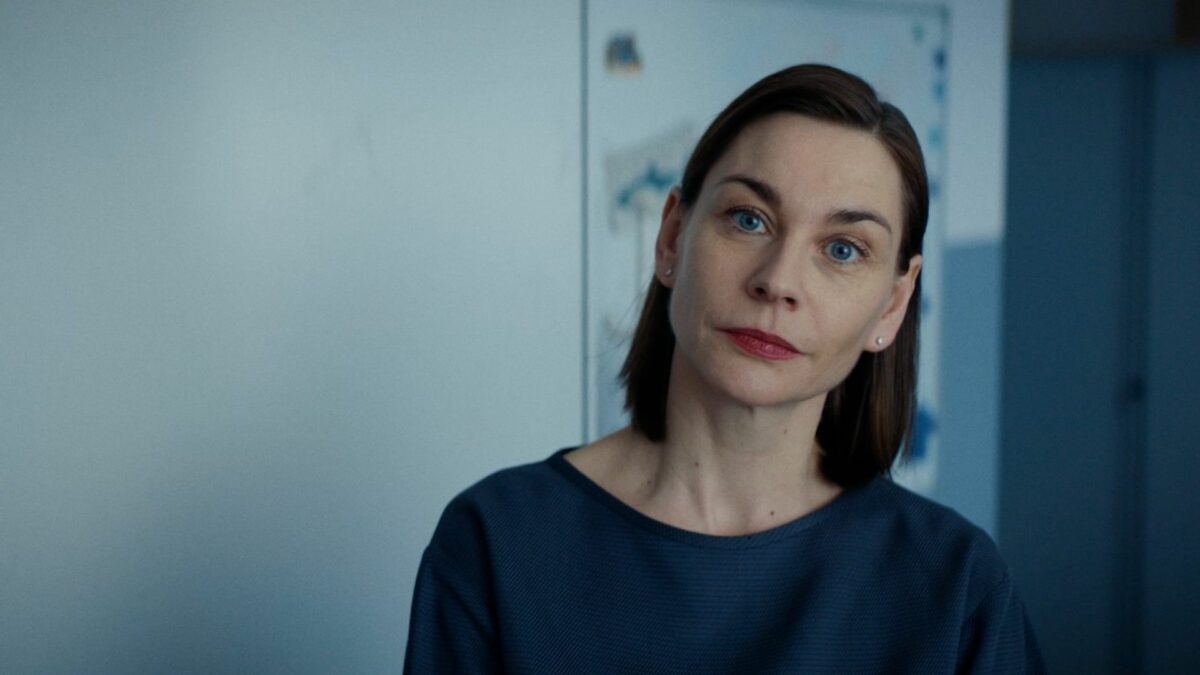 Christiane Paul as Ingeborg in “Parlement.” Photo courtesy of Topic.

There are comparisons that can be made with other political comedies. “Veep” is one comparison that has been made, but “Parlement” actually cuts pretty close to the bone in terms of what people feel about the EU bureaucracy and how it works (or doesn’t). It’s not really mean-spirited but it does cater to national stereotypes. Although quite different from the British classic “Yes, Minister,” and “Yes, Prime Minister,” it shares with those shows the aspect of the underlying powers trying to control the narrative.

A weakness for an American audience is that a certain knowledge of EU politics is assumed, one that most of us don’t have. Nevertheless, the machinations are very funny indeed. The EU parliament has, like other similar bodies, political parties and affiliations that cut across national lines. The right wing parties have hilarious counter-intuitive names that would lead any novice astray. And that would be Samy who pursues and is pursued by the beautiful young Swede, a member of the Democrats of Sweden, a Fascist party of Holocaust deniers. It takes him a while to wake up to this reality, especially since libido often overrides the horror of his burgeoning awareness of her beliefs.

The thru-line of the first season is Samy’s championing of the anti-finning legislation, but finning is beside the point. It is the learning curve, navigation, and slow realization of “damned if you do and damned if you don’t” that propels this narrative.

The cast is first rate led by Xavier Lacaille, a young Frenchman known as much for his writing as his acting. His naïve enthusiasm, the slow dawning of the reality around him, and his determination to jump the political hurdles and come out a winner are fun to watch. He conveys a sincerity that is crossed with brash opportunism.

Liz Kingsman as Rose is a chilling delight to watch. Cynical and a survivor, she is believable as the person manning a life boat on the Titanic, but only in as much as it will benefit her. Lucas Englander, Torsten, is the young German you love to hate. His arrogance is exceeded only by his inability to read a situation. He’s the smartest guy in the room who doesn’t realize he’s an idiot. What he is, however, is a puppet for his boss to manipulate. And that boss, played by Christiane Paul, is a star. Paul successfully balances the tightrope of political savvy with an icy reserve. It’s difficult to identify with a character so lacking in empathy and yet she makes Ingeborg the character to whom you pay closest attention.

Philippe Duquesne as Specklin and Jane Turner as Sharon Redlion are hilarious in their portrayals of career petty functionaries who want only to keep on keeping on. Their insanity and incompetence are actually quite endearing. Duquesne is a seasoned character actor of both comedy (“Welcome to the Sticks”) and drama (“A Very Long Engagement”). Redlion, an Australian, is a very established comedy actress best known for the series “Kath & Kim.” Her comedy, often physical, never misses a beat and always, always steals the scene.

In English, French, German and Spanish with English subtitles.