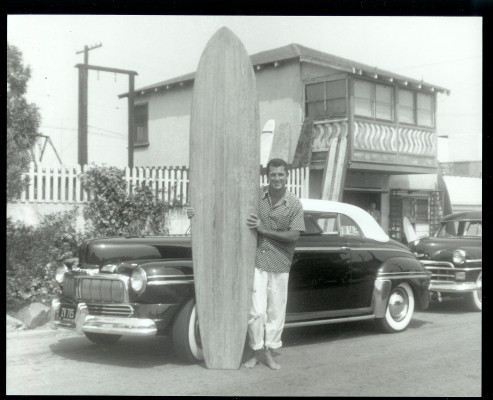 John McFarlane with his ’46 Merc and his Velzy board in front of Velzy’s home on Loma Drive. It was the 5th balsa board Velzy had ever shaped. Photo courtesy of Susan McFarlane

“We all wanted to be Phil Edwards or Ricky Irons. But I didn’t have the body for it. Everyone can’t be Mickey Mantle,” he said.

Nonetheless, his induction into the Hermosa Beach Surfer’s Walk of Fame this Saturday is recognized throughout the surf community as long overdue. 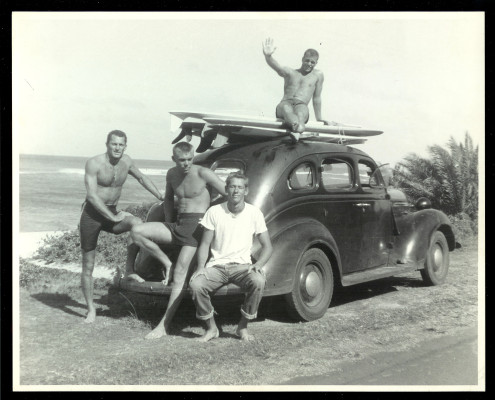 McFarlane, now 86, and still as lanky and taciturn as in his youth, was the prototypical soul surfer a decade before the term was popularized in the early ‘60s. He and his wife Susan live in a Hermosa walk street house of their own design, 100 feet from the sand. The siding is redwood, stained driftwood gray. Inside, surf photos and Kenny Draper paintings hang on untreated redwood walls. McFarlane bought the Drapers shortly after becoming a lifeguard. 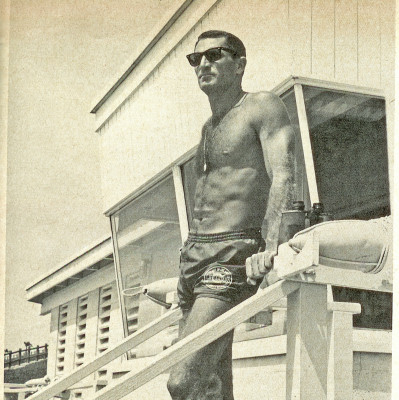 McFarlane described the years from ’57 to ’67 in a tower at Torrance Beach as the best years in his three decades of lifeguarding.

“I was working the tower at Avenue C when I saw an old station wagon driving down the walk ramp. ‘I thought, ‘Another lost tourist.’ It was Kenny. He had two paintings he thought I’d like — both of Campo Lopez at K55 in Baja, where we surfed. One was an old fisherman, the other the old woman who had the lobster stand.”

During this period Draper was supporting himself painting clown murals in local bars. His Pitcher House murals can still be seen at what is now Saint Rocke. Draper would become become a celebrated painter of vertigo inducing seascapes before dying of alcoholism at 30.

“Kenny wanted $80 each, which I couldn’t afford. Susan and I were just married. He said take them home and then decide which one you want.”

During his first 20 years of lifeguarding, on the days McFarlane wasn’t in a tower, he surfed Trestles with three or four  fellow guards who would arrange to get the same days off. 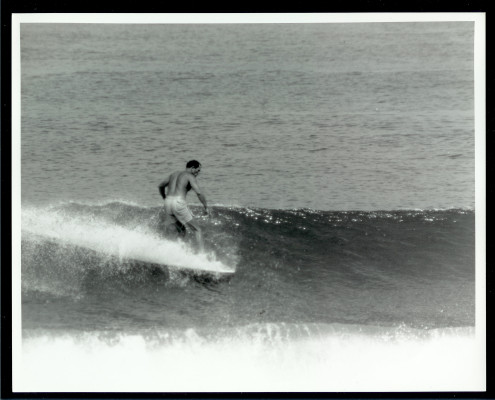 Trestles is on the Camp Pendleton Marine base. During the ‘50s and ‘60s the Marine shore patrol confiscated boards that washed up past the mean high tide.

After several years hiding his VW van in trees and sneaking down the San Mateo Creek to the surfline, McFarlane struck up a friendship with a Marine reserve he met in the water. He asked the Marine for some Marine stationary. Don’t let them know you’re surfers, the Marine cautioned him.

On his next Trestles trip, McFarlane pulled his van up to the Camp Pendleton gate and presented an envelope bearing the Marine crest to the sentry. He and the four other lifeguards in his van were neatly dressed and their surfboards covered by towels.

The sentry gave the whole crew stink eye while opening the letter. It read, “Captain John McFarlane has been of  invaluable service to  the United States Marine Corp in assisting with the instruction of our lifeguards at Camp Pendleton. In appreciation, he is to be granted entrance to the base at any time.”

The letter was signed Captain William Blake, a reference to the  English poet. McFarlane wasn’t a captain, either. But he had, on one occasion, cautioned a Marine captain not to launch an amphibious landing craft loaded with heavily equipped grunts into surf that would have flipped the craft and probably cost lives.

After reading the letter, the Marine sentry saluted the lifeguard “captain,” who snapped a salute back and for the next 14 years McFarlane’s familiar van was waived through the gate. In 1971, Trestles was opened to the public. To escape the crowds, McFarlane and his crew traveled further south to Leucadia and Encinitas.

McFarlane began surfing at 22nd Street in Hermosa during the transition from 100-pound redwood boards to lightweight balsa  boards. A photo from that era shows him standing next to his ‘46 Mercury holding the fifth balsa board ever shaped by Dale Velzy in front of Velzy’s mom’s house on Loma Drive. 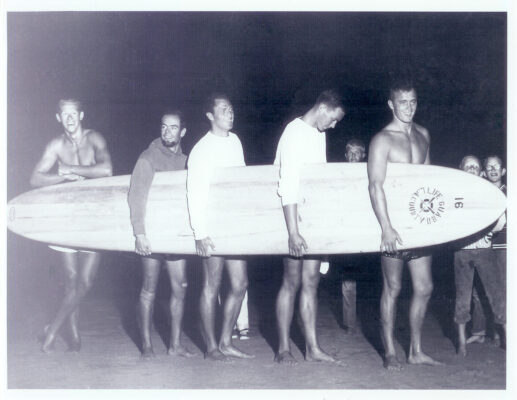 After graduating from Redondo High in 1946, McFarlane took the advice of the school’s vice principal Lloyd Walker to enlist in the Army. Though the war was over, enlistees still qualified for the GI Bill, which paid college tuition and living expenses. 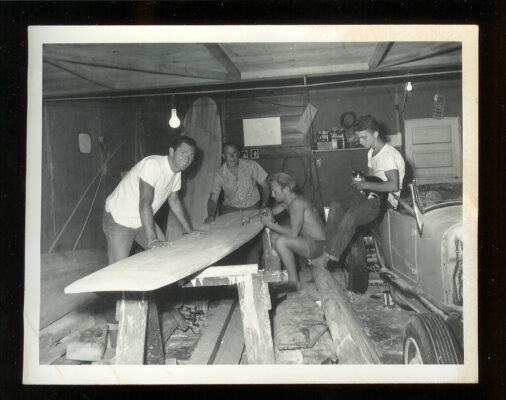 Upon return from two years jumping out of airplanes with the 11th  Airborne Division in Japan, McFarlane enrolled at the University of Southern California as a business major. His father, an executive at Standard Oil, promised his son a  job with Standard Oil would be waiting for him when he graduated.

Then McFarlane passed the lifeguard test.

“After that first summer, I knew I wanted to stay on the beach. It broke my dad’s heart, but I’ve never regretted a single day of it,” he said.

McFarlane spent 10 years in a tower on Torrance Beach.

“It was the fastest 10 years of my life and my best years as a lifeguard,” he said. “Finally, one day Captain Dwight Crum told me, ‘You’ve got a college degree. You need to move up.’”

He spent the next two decades largely in administrative positions. Following his retirement in 1983 he was presented with the  Lifeguard Lifetime Achievement Award. During the presentation, fellow Captain Greg Lee described McFarlane as “epitomizing the perfect lifeguard.” 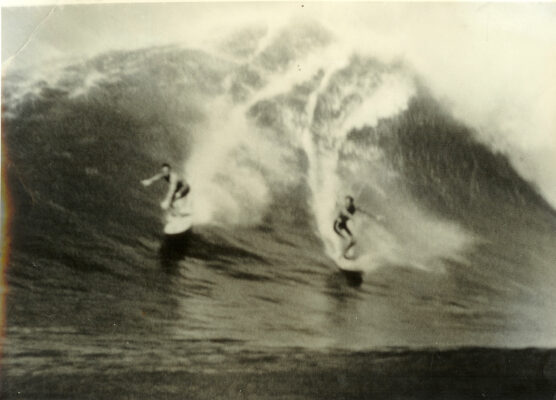 McFarlane with Buzzy Trent at Waimea on an early trip to the islands.

McFarlane’s first trip to Hawaii was February 1953, the month he graduated from USC.

Fellow 22nd Street surfer Eddie Johnson, whom Velzy nicknamed “Tweet Tweet” because his legs were so skinny, was working as a night clerk at the Ala Moana Hotel.  He invited McFarlane and Bob “Bergie” Bergstrom (who is also being inducted Saturday into the Surfing Walk of Fame as a Pioneer) to visit. They stayed two months.

“When it was small, we surfed Queens in Waikiki with Rabbit Kekai and the other Hawaiian beach boys,” McFarlane said. “When it was big we’d all go to Makaha.

“Sunset became my favorite spot. Makaha felt too closed in. My last trip there was 1962. The Aussie invasion had begun. I can’t surf with people yelling at each other.” 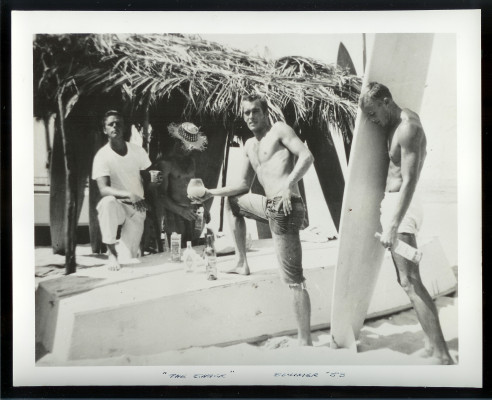 Kicking back at 22nd Street Shack.

“Stu Linder [another 22nd Street surfer who will be named a Walk of Fame Pioneer on Saturday] did a lot of sailing. He said he thought he’d seen waves off of Mazatlan. Stuie and I put our boards on the roof of my VW Beetle and stopped for a beer at the Poop Deck. Then we set the odometer at zero and drove straight through.When we arrived at Canon Point the odometer read 1,272 miles.

“We could see Canons from our balcony at Hotel La Siesta and surfed it every day. We’d get excited when we saw another surfer.”

Linder, McFarlane recalled, won the 1966 Academy Award for film editing for his work on “Grand Prix.” “We were drinking in Bergstrom’s front yard with the Oscar on the patio table,” he said. “People walking by would look at the statue and we’d hear them say, ‘They’re surfers, it’s a fake.” 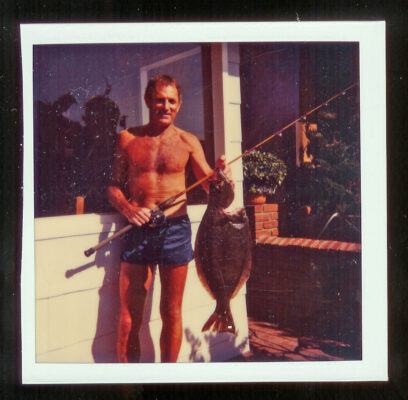 “After a few years, we invited [surfboard shaper] Bing Copeland and [lifeguard captain] Sonny Vardeman to Mazatlan. We pulled up to La Siesta, and oh my God, I’d never seen so many surfers in my life. You couldn’t leave your board on the beach for 30 seconds or it would be stolen. I didn’t even take my board out of the bag.

“That’s when John Joseph [a Jacobs team rider] invited me to Cabo. After I retired in ‘83, I went down there every May and October for two to three weeks and it kept me happy.” 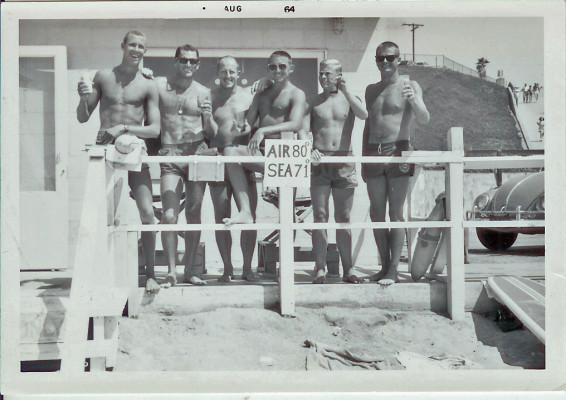 But decades of pulling struggling swimmers from the water had taken a toll on both of McFarlane’s shoulders.

One September evening he was lowering the flag on his Torrance tower when he saw five shirtless teens in long pants step off a low tide sandbar into a deep hole. The Santa Anas and rip began carrying them out to sea. McFarlane raced into the water with a rescue can over one shoulder and a rescue tube over the other. He strapped the rescue tube around the first teen he reached, told the second teen he reached to hold on to the first teen, put two others on the rescue can and told the fifth one to hold on to his shoulders.

“I never was so happy to feel sand under my feet. I couldn’t eat that night,” he said. 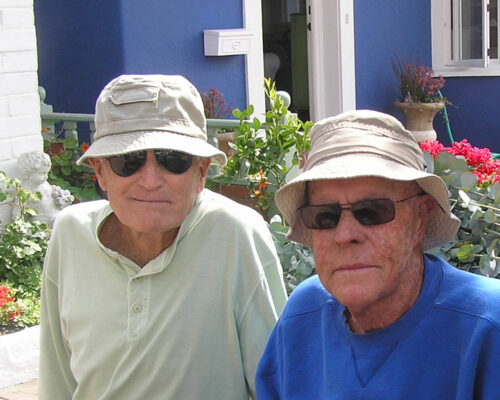 “In my late ‘60s, when I paddled it started to feel like I had ice picks in my shoulders. Steve Lombardo at the Kerlan-Jobe Clinic would give me cortisone shots to get me through.”

“Cabo was getting crowded, so one day Andy [airline pilot Don Anderson] and I decided to visit George Lowerre, another retired guard from here who lived in Costa Rica.

“We brought our wives and did some sightseeing in San Jose. Then we rented a car and headed north to Tamarindo. We surfed there for seven days and then went south to Nosara to visit another retired lifeguard friend. It’s a soft break like Churches or San Onofre. It was  heaven. We were in our 70s and knew we were winding down.

“We worked our way back to Jaco’s, but it was crowded. George told us to go a ways south where we’d find a bunch of ranches with kids hanging on the gates and to give the kids a few colons and they’d let us in. We stopped at the third gate where there was a bluff overlooking a black sand beach. It looked like Leucadia. Andy and I paddled out and each caught a few waves. Then I stopped surfing. Andy paddled over to me and said, “What’s wrong with you? You just let three perfect waves go by.” 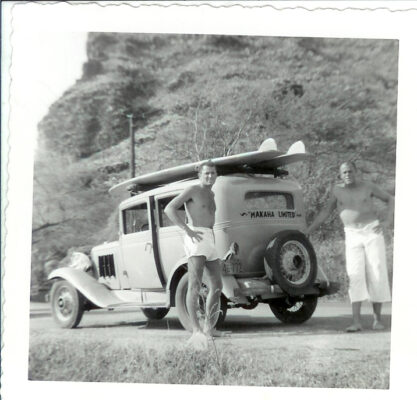 McFarlane and Bergstrom with the Makaha Limited.

“As I was walking up the beach, I asked one of the kids what the place was called. I wanted to know because I knew it was the last wave I would ever surf. He said, ‘Playa Hermosa.’”

McFarlane walks 30 minutes on the beach every day, never taking his eyes off the water except when he stops to pick up trash. ER