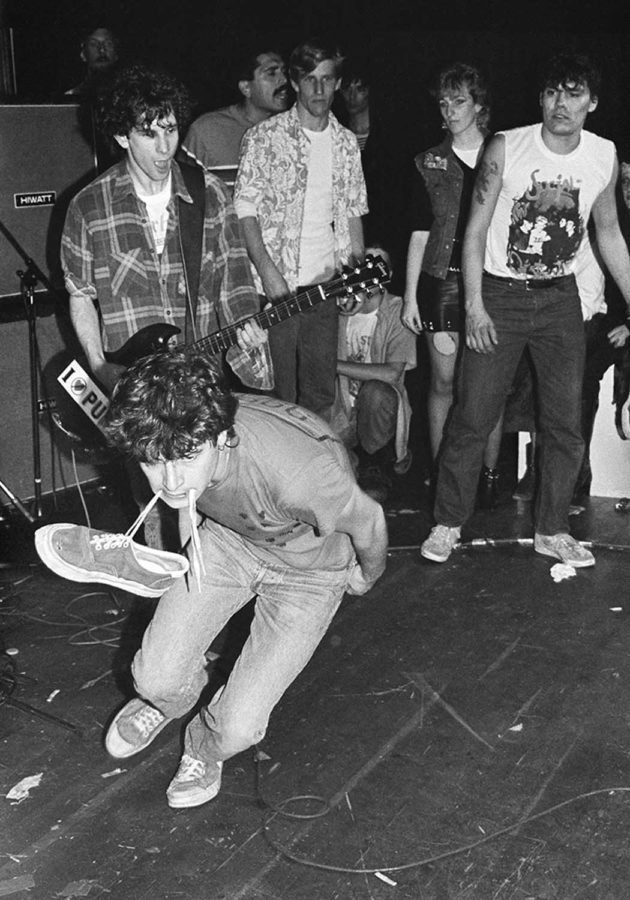 Fans look on at the antics of singer Keith Morris. Photos by Kevin Salk

Kevin Salk’s first foray into offering up his photographs for others’ inspection came in a class at Mira Costa High School. Salk, then a gangly student with over-sized ears and a love for punk rock, submitted a photo of Black Flag singer Henry Rollins taken at the Ukranian Culture Center on Melrose Avenue, at one of the thousands of shows the band played during a period of ceaseless touring in the early ‘80s.

The reception was positive, though not perfect.

“The teacher wrote, ‘Don’t crop out the borders.’ He gave me a nine,” Salk said.

Decades later, the Manhattan Beach resident is poised for bigger exposure with the opening this Saturday of his show “Punk Photography: A Fan’s Perspective” at the Fathom Gallery in Los Angeles. The show collects photos Salk took while growing up in the South Bay and attending musical performances.

Many of the bands he documents, including Black Flag and the Descendents, came from the Beach Cities like he did. Salk’s photos capture a scene that was underground and scorned at the time, but which has since grown in stature into an acclaimed part of popular music. And they do so, he is proud to say, from the perspective of someone with only a high school photography class as training, and who developed his photos in an impromptu darkroom set up in his dad’s bathroom. Rather than try for staged portraits or artful group shots, Salk’s photos communicate what he says he felt at the shows. Indeed, some of the most eye-catching images in “A Fan’s Perspective” are not of performers but the audience.

“The intensity, feeling the sweat — or sometimes spit — coming from the band: that’s what I love,” Salk said.

Salk, who graduated from Costa in 1983, found himself drawn to the music through the same feeling of alienation that attracted many of its adherents. But he was also something of an unlikely punk, one with attentive parents who would stay up all night waiting for him to return from shows in far-flung parts of Southern California. He managed to stay out of the gyre of violence and drug abuse that limited which stories from the era live on.

Though he didn’t say so himself, this tendency — a knack for being deep enough in the scene to see it for what it is, but not so close as to be consumed by the heat it generated — is key to Salk’s photos. Fans gawk and jump, singers writhe and exult. The images in the show reveal a photographer with the ability to make himself disappear in a crowd, one who makes people forget that a particular moment might be captured for eternity and to remain completely in the moment. 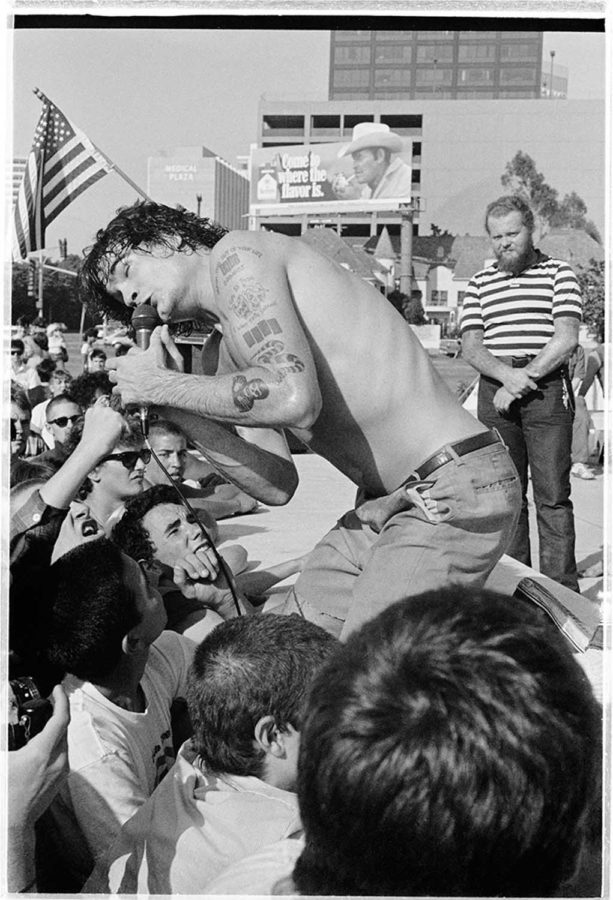 Henry Rollins sings at a Black Flag show on Wilshire Boulevard in the early ‘80s.

Of course, it helps being surrounded by blaring guitars and drums pulsing at 180 beats per minute. For most of his adult life, Salk never thought his photos were anything special. He was inspired by the photography class — he is in the process of contacting Mira Costa’s administration to find the instructor’s name — and loved seeing the photography of Ed Colver and Glen Friedman. But he thought of himself as a fan first, a reader of ‘zines and an obsessive gatherer of flyers.

“I never meant to sell them. You know what it was? It was something to show my friends,” Salk said of the decision to start photographing shows.

He did, however, take excellent care of the negatives. Salk cut ties with the punk scene on graduating from high school and moving on to college. But his collector’s impulse resulted in a well-preserved collection of hundreds of photo negatives, carefully put away in boxes.

Several years ago, he created a website and began putting some of them up online. That’s when Frank Coiro, Fathom Gallery’s founder, came into the picture.

Coiro discovered Salk’s work by chance. Last year, the gallery was doing another show of punk-themed photography, and felt that photos of Black Flag were needed to round out the display. Although the gallery works with noted photographers, they didn’t quite have what the gallery was looking for. Coiro took to the Internet, and came across Salk’s website.

“I was blown away by what he captured. Then I found out he was doing it as a high school student,” Coiro said.

The gallery showed two of Salk’s photos. The experience jump-started Salk’s excitement about a period of his life he had grown used to thinking of as a youthful diversion. Working with people from Fathom, he dove back into the negatives. A photo, for example, of Minutemen bassist drummer George Hurley and bassist Mike Watt, brought him back to a show he had long forgotten.

This Saturday’s opening will be the first show dedicated to his work. The experience has prompted him to develop a book of his photos, which will also be published by Fathom.