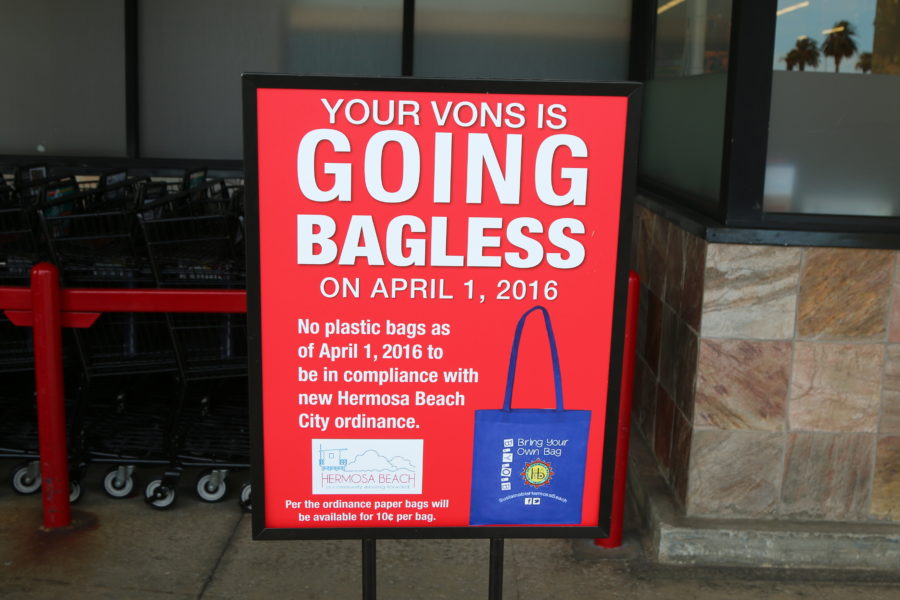 A sign in front of the Hermosa Vons alerting customers to the change. Photo

Friday marks the beginning of a city-wide ban on single-use plastic bags in Hermosa Beach.

The ban applies to retailers, restaurants and pharmacies larger than 10,000 square feet. Smaller stores will have until Oct. 1 of this year to comply, and customers will have the option of purchasing paper bags from retailers for 10 cents a piece.

The ban came after persistent lobbying by Hermosa environmentalists, who highlighted the tendency of non-biodegradable bags to end up in nearby ocean waters. The ban was also the subject of political wrangling at the City Council. Former council member Nanette Barragan, who is now running for Congress, delayed her resignation in order to ensure the ban’s passage last year.

Hermosa’s action on the issue comes as California attempts to implement a broader ban. Gov. Jerry Brown signed statewide ban on the bags in 2014, but the American Progressive Bag Alliance, a bag manufacturing trade group, gathered enough signatures to put an initiative before voters. The referendum will be one of many expected to confront voters at the polls in the Nov. 2016 general election.

In the interim, more than 100 cities around the state, including neighboring Manhattan Beach, have implemented their own bans.

Hermosa is hosting various events to help residents prepare for the transition. On Thursday, the city will be distributing free ChicoBags to shoppers at Vons from 4 to 6 p.m. On Friday at 9 a.m., the city will hold a meeting on the pier to provide more information about the ban and other ongoing conservation efforts in association with Earth Month, which begins April 1.

The city will open a new bike corral Saturday morning as part of its efforts to encourage car-less commuting to downtown Hermosa.

The corral, located in front of Mickey McColgan’s on Hermosa Avenue, offers a relatively compact area for cyclists to park and lock their bikes. Cycling advocates have noted that the bike racks on Pier Plaza are often over capacity, especially on holiday weekends.

Hermosa has enacted various measures in recent years to encourage bicycling in the community. It recently painted “sharrows”—images of bicyclists placed at periodic distances—on Monterey Boulevard and Longfellow Avenue to enhance cycling safety on those streets.

The city is being supported in the effort by the South Bay bicycle Coalition and the Southern California Association of Governments.