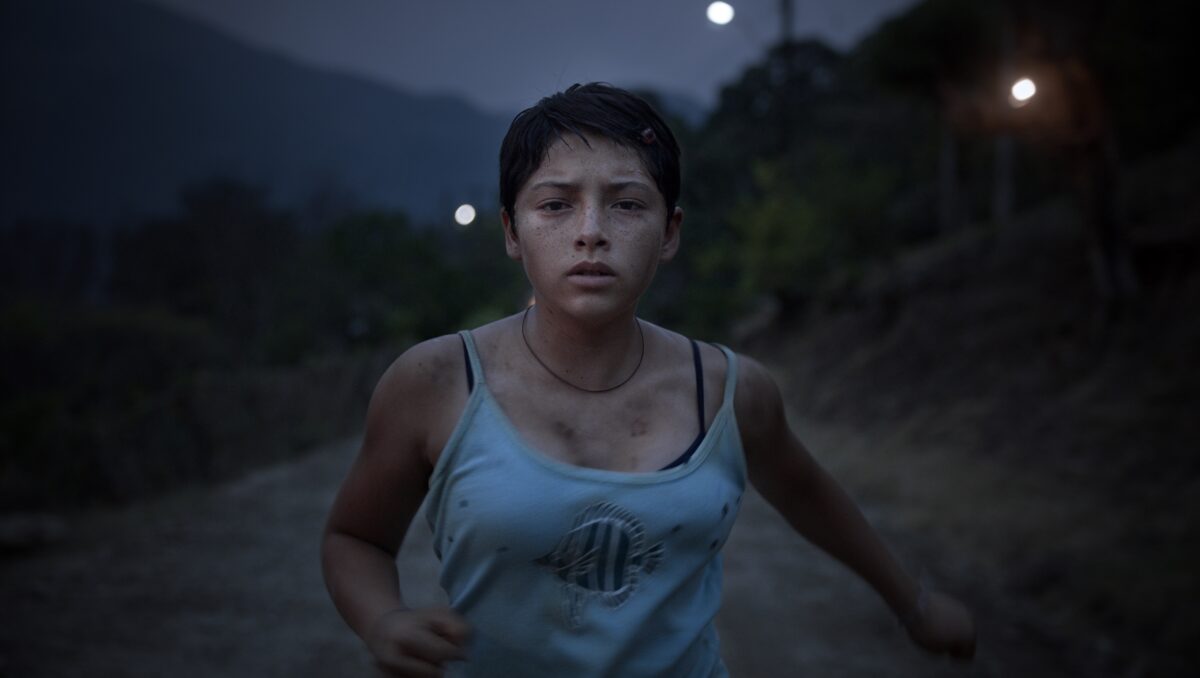 Marya Membreño as Ana in "Prayers for the Stolen." Photo courtesy of Netflix.

Marya Membreño as Ana in “Prayers for the Stolen.” Photo courtesy of Netflix.

“Prayers for the Stolen,” the stunning film of what happens when hope collides with despair, is subtle yet devastating in the questions it asks. What can you do and where can you go when the police are corrupt and ineffectual in their war against the cartels who control the countryside? This small village in the mountains of Mexico offers little in the way of livelihood. Many of the village men have abandoned their families to work illegally across the border, occasionally sending money to their wives, but often not. There are the poppy fields where the women milk the flowers for the opium that will be converted to heroin. The men blow up the mountains in search of minerals. The living is subsistence, barely feeding the children of the village.

Writer/director Tatiana Huezo, adapting the novel Noche de Fuego by Jennifer Clement, follows the lives of three best friends, Ana, Maria, and Paula as they traverse the pathway from childhood to adolescence. To them at age eight, life is an adventure with shared games and hikes. Fast cut to age thirteen and life becomes more complicated with crushes, physical development, and school work.

Their freedom is closely watched by their mothers because dangers are everywhere. Human life is worthless to the two warring enemies. The federal police regularly spray the surrounding hills and village with poison to try to kill the poppies. The poison doesn’t just permeate the fields; it is slowly killing the children inevitably caught in the vapors. The cartels, working openly in front of the police stationed in the village, collect the opium extract, demand protection money from the villagers, and come regularly to steal the pubescent girls of the village as a reward for members of their gang. 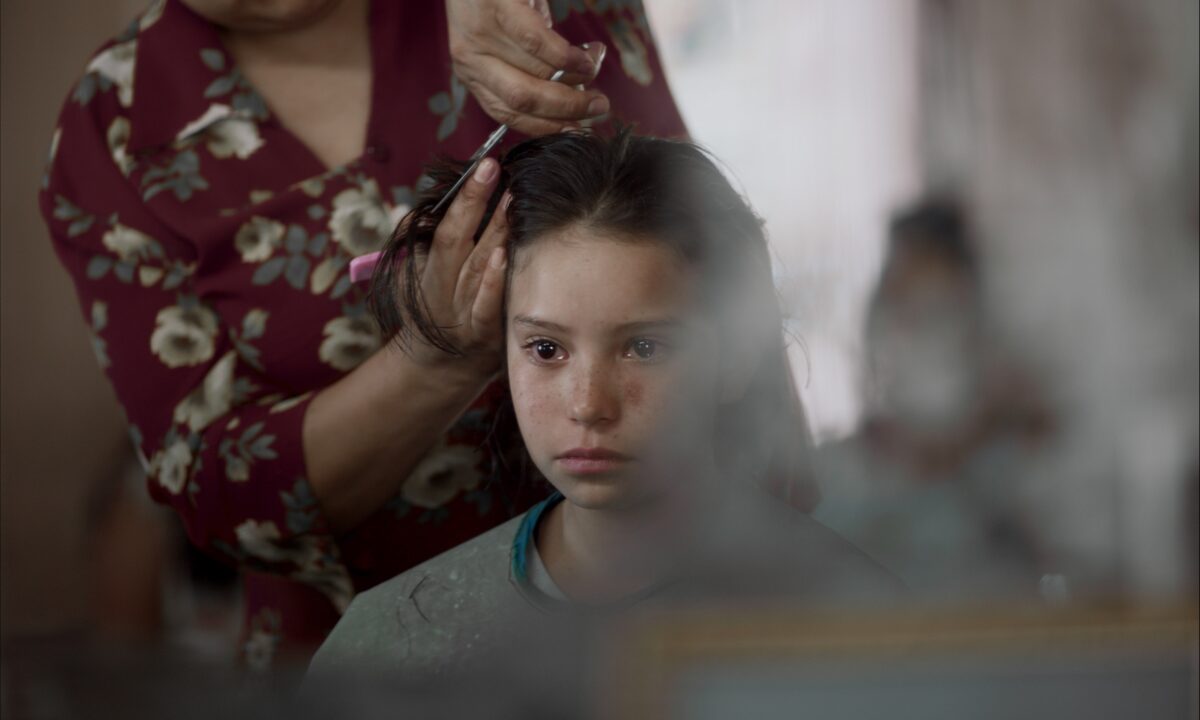 Ana Cristina Ordóñez as young Ana in “Prayers for the Stolen.” Photo courtesy of Netflix.

Watching the three girls play their games, an undercurrent of danger is felt. A girl has been stolen, her family devastated, and no one has any answers for them. Ana’s mother Rita, whose husband has stopped calling and sending money from America, panics when she sees that Ana and her friends have started to play grown-up games with lipstick. Recognizing a danger that she dares not articulate to the girls, she has the beautiful hair of Ana and Paula shorn. Maria, disfigured with a cleft lip, is allowed to keep her long hair. Rita digs a grave-like hole in the backyard and has Ana practice hiding in it. For all three girls, it will be the same, like an unexplained fire or earthquake drill that horrifically will someday save two of them.

How do you protect innocent lives when the evil surrounding them is inescapable and irrevocable? Even their schooling is defined by the violence because their teachers are often murdered by one force or the other.

The characters of Ana, Paula, Maria, and Rita are so deeply drawn and developed that the dread and inevitability begins to weigh you down and the survival of some is enough of a reason to breathe in, if only temporarily. Looking at Rita’s efforts to protect the children is watching a hero who tries to allow some carefree moments of childhood to seep into the life of her daughter. 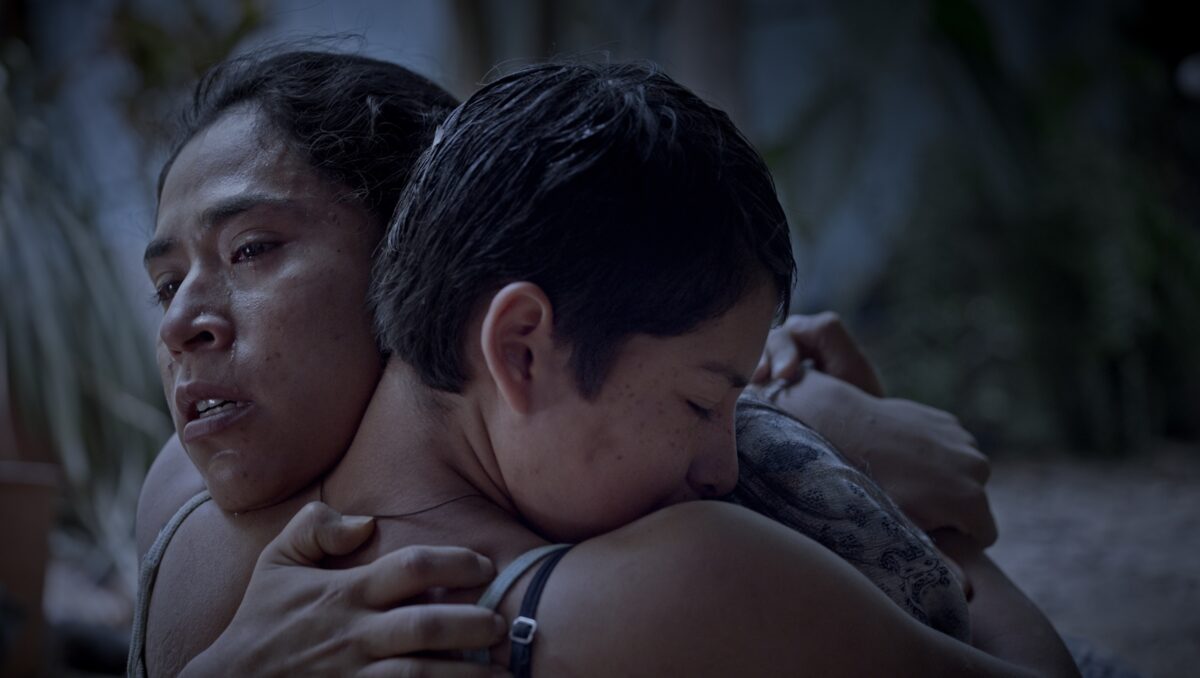 Mayra Batalla as Rita and Marya Membreño as Ana in “Prayers for the Stolen.” Photo courtesy of Netflix.

The audience reaction is more likely to be experiential than passive; both depressing and informative. As an adult, you are meant to see the world through Rita’s eyes as she tries against all odds to encourage her child to move forward without the fear that she has earned.

Huezo has taken a slow, steady, and almost relentless approach to her storytelling that is immensely aided by the cast she has chosen. Ana as a child is a luminous Ana Cristina Ordóñez González, as are the child representations of Paula, Camila Gaal, and Maria, Blanca Itzel Pérez. As pubescent and hormonal adolescents Ana is played by Marya Membreño, and Paula by Alejandra Camacho. Remarkably, none of the children had acted before. They went through an exhaustive training period with an on set coach who worked with them for three months prior to filming. The results are stunning.

Although this is ostensibly about the trajectory of the three young girls, it is most indelibly the story of Rita, the mother who lives a bleak existence and sees a bleaker future. As portrayed by Mayra Batalla, her face of deep lines and exhausted eyes conveys the struggle of a woman fighting a losing battle against enormous odds to find a future for her child; a future that was denied her by circumstances she could never have imagined.

Director of Photography, Dariela Ludlow, has caught the beauty and the devastation of a land that is both verdant and desolate. But it is Tatiana Huezo who masterfully adapted Clement’s book and framed the story as a devastating look at the loss of what may be an entire generation of youth.