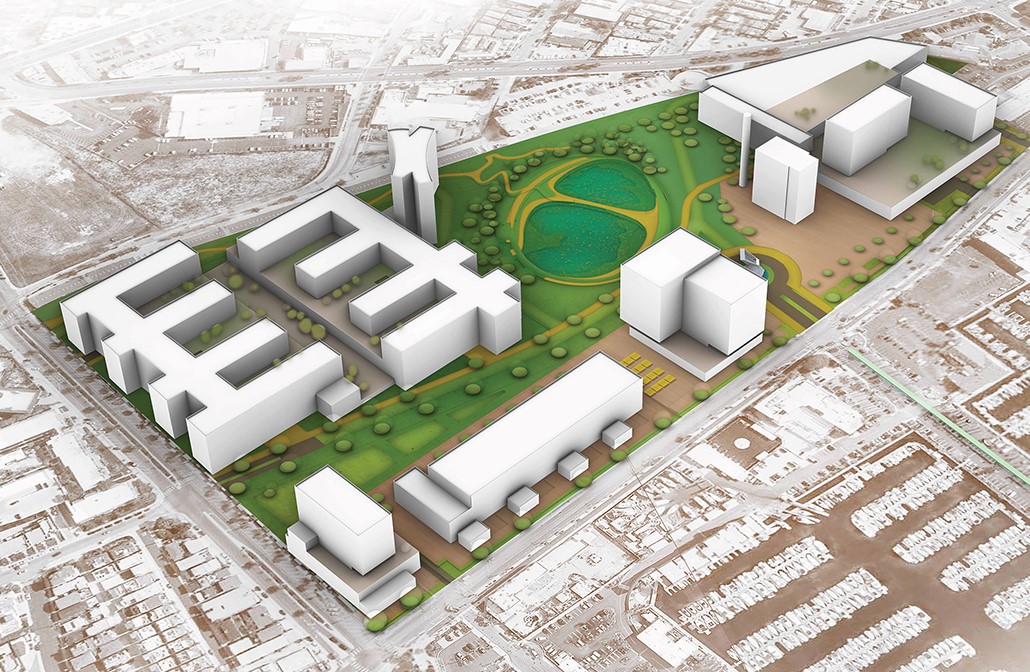 The two developments AES site owner Leo Pustilnikov has filed preliminary applications for include 2,320 housing units, an office complex, a hotel and 22 acres of greenspace. The larger project is seen above, "One Redondo." Illustration courtesy of Leo Pustilnikov

Because of the timing, opponents may have limited recourse to counter them.

The larger project, filed Aug. 10, named “One Redondo” in architectural drawings, proposes 1,832 market rate housing units and 458 affordable units, with a separate hotel, a large office complex and 22 acres of green space between.

The structures would all be built on the site where the power plant is today.

The main concrete plant building on Harbor Drive would remain, to be used for event space and/or potentially a museum.

“One Redondo” joins Pustilnikov’s preliminary application July 20 for a 30-unit, mixed-use development across the street from the power plant, to include the existing, much smaller S.E.A. Lab building.

While the area is not permitted as residential, an exception could be made during a time that the Redondo Beach housing element remains non-compliant with the state.

The element is a list of places to zone for state-mandated new units.

“(State Bill) 330 preserves rights as of the time of filing, so if the city ever gets its act together, it doesn’t make a difference,” said Pustilnikov. “I think every developer in Redondo in the past decade can say working on the city’s timeline requires incredible longevity.”

The AES land is now zoned by the city as “P-GP, Generating Plant Zone.” This means parks are permitted uses, and public utilities are conditional uses.

“Since Redondo Beach is a Charter City, the proposal at the AES site would fall under a major change in allowable land use, requiring it to be put to a vote of the people,” said Brandy Forbes, the city’s community development director.

The existing S.E.A. Lab building is seen in the foreground of the proposed “Ten21Redondo” project. It includes 30 apartments (six affordable) and commercial space. Illustration courtesy of Leo Pustilnikov

“This would be the last place we would rezone for housing,” Mayor Brand told Easy Reader earlier this month.

“Hopefully it’s within our jurisdiction,” said Loewenstein, referring to local control. “You think (Pustilnikov) would have the courtesy to talk to the city before we read about it in the newspaper.”

The Redondo Beach City Council submitted its third attempt at a compliant 2021-29 housing element on July 5.

Asked if the project would require a public vote regardless, Pustilnikov said the city’s non-compliance with state law limits its ability to stop construction.

“The city loses local control without such (approved housing element),” said Pustilnikov. “The city should get serious about housing.”

General Plan housing elements have long been required in California cities, though they have become more stringent in recent years as the state looks to address a housing crisis.

Mayor Brand and a majority of the city council have called for much of the AES site to become parkland, though a deal fell through in 2020 that would have designated 25 acres of the 54-acre site as such, sold to the city for $50 million (paid for by many grants).

The AES plant is not operating. It is on standby until the end of 2023. During this period, the state pays Pustilnikov for the possibility of using the plant.

The two preliminary applications for development would need to undergo an Environmental Impact Report, among other steps, for approval.

Because the projects were submitted under SB330, however, each would be limited to five public meetings.

What does Pustilnikov think the mayor’s, and residents’ reactions will be?

“Same thing for 20 years. It is what it is,” he said. “They want to dump all the housing in North Redondo on four parcels.”

If the projects happen, Pustilnikov said it will also open up 30 acres of Southern California Edison right-of-way, under the power lines extending up the hill by the Post Office.

His “One Redondo” project includes the turnaround station that connects to those lines.

As far as the 22 acres of green space in the architectural drawings, what it may include is yet to be decided.

“Up to how people want to use it,” said Pustilnikov. “It’s a lot of green.”

Also within the project, AES plants 1-4 would be converted to event space. A boiler building and smokestack would be preserved too.

“My attorneys are working with the city, and we’ll see what happens,” said Pustilnikov.

What about the time frame?

“Depends on the city,” he said. “If I don’t get approval, hopefully the state extends the (AES standby). Extending is the next best use.”

If his projects go forward, Pustilnikov plans for all-encompassing construction.

“Let’s get the approvals first, but it would likely happen all at once,” he said.  ER