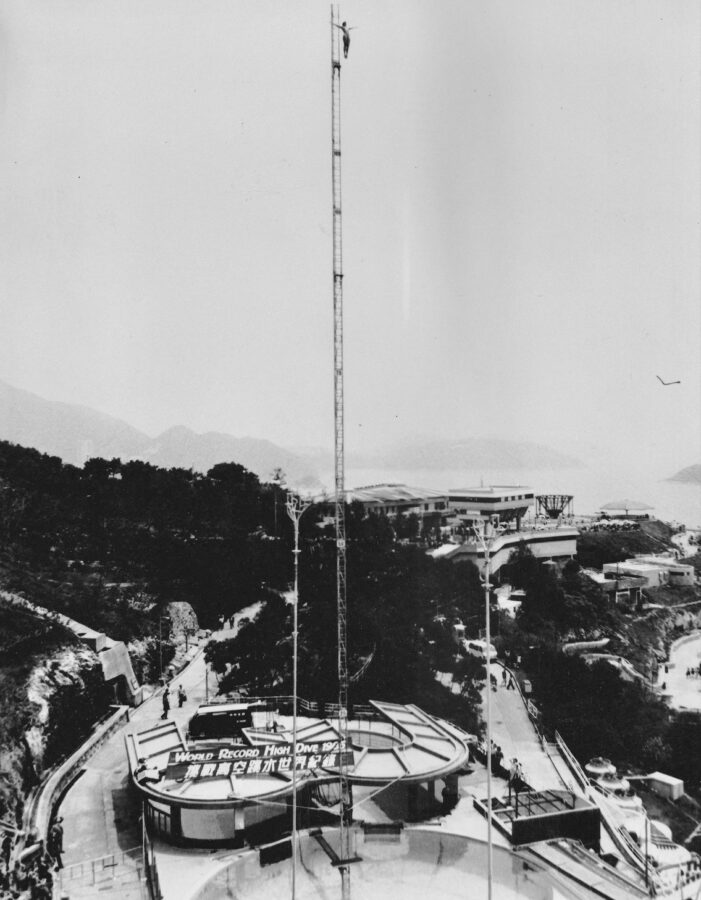 Lucy Wardle Streeter prepares to enter the Guinness Book of World Records for the woman’s highest dive, at Ocean Park in Hong Kong in 1985. Her dive of 120 feet, nine inches, is still the record. Photos courtesy of Lucy Wardle Streeter 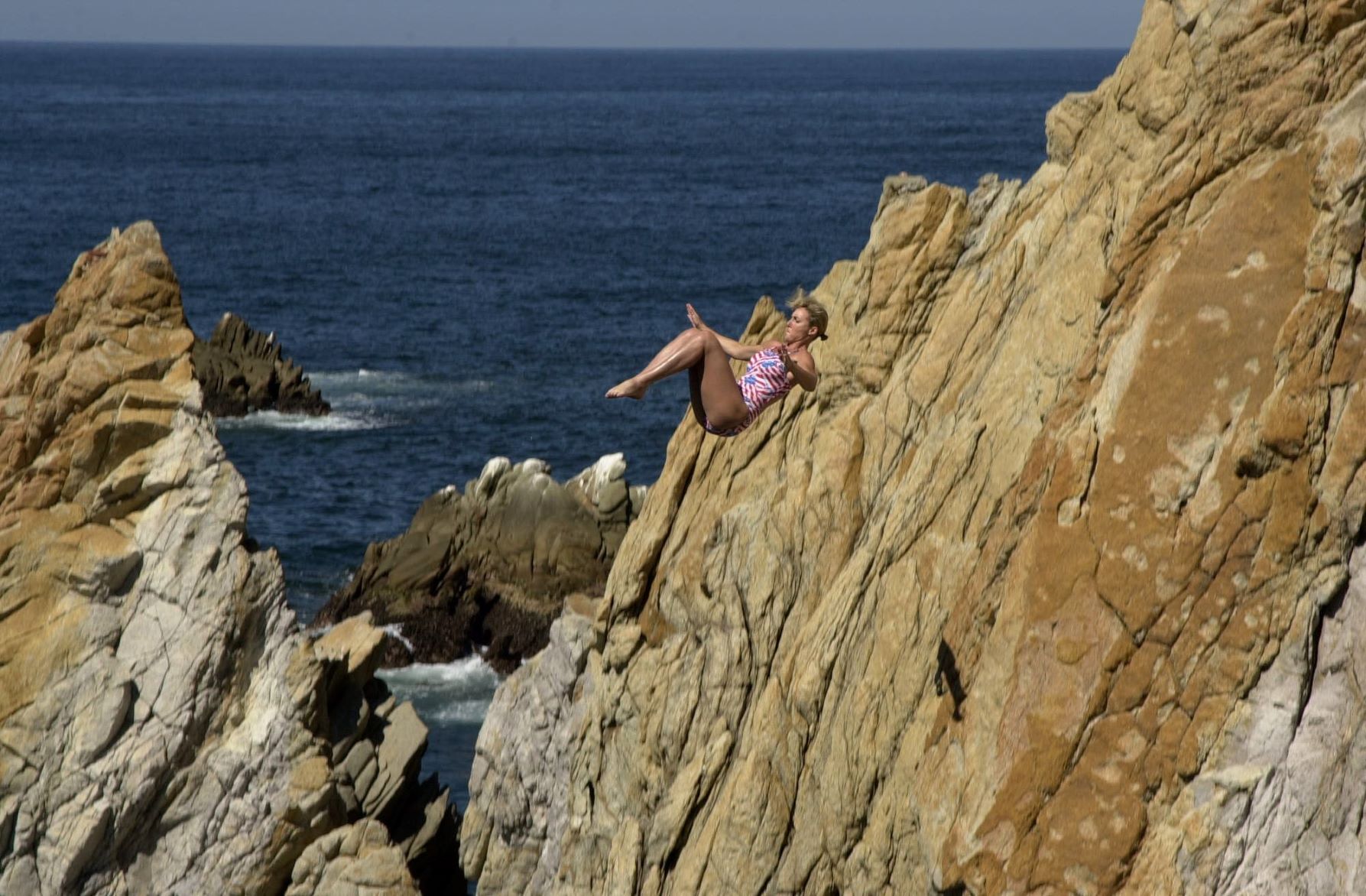 Lucy Wardle Streeter in 2017, diving for Red Bull off the rocks at Hells Gate on Possum Kingdom Lake, in Texas.

by Stacey A. Morse

In 1985, Rancho Palos Verdes resident Lucy Wardle Streeter climbed the ladder of a swaying, 120-foot steel tower, built to her specifications at the edge of a pool in Ocean Park, a marine mammal amusement park in Hong Kong.

At the top of the tower, she stepped onto a platform barely as wide as her stance, and stood with arms outstretched, for 10 seconds. Then she lept, and executed a beautifully arched, backward flip. Three seconds later she entered the water at 71 miles an hour, knocking the wind out of herself.

According to the 2022 Guinness Book of World Records, the 120-foot, 9-inch dive remains the highest dive ever performed by a woman.

Wardle Streeter began diving at Miraleste High School when she was 15, the year she, her five siblings, and her parents moved to Rancho Palos Verdes. (Streeter is her married name.)

“That’s very late. Most divers start at five or six, just as in gymnastics,” she said.

She also played volleyball, basketball, and competed in track and field at Miraleste.

“I thought trying out for all the sports in high school would be really fun,” she said.

One day, while “goofing around on the diving board,” Miraleste swim coach Ann Warfle told her, “You need to work with Lyle Draves.”

Draves coached at the Jack Kramer Club, in Rolling Hills Estates. He had already coached 11 Olympic divers, among them his wife Vicki, a two-time Olympic gold medalist.

Draves’ coaching led to the 15-year-old’s first jobs, high diving at Marineland and Magic Mountain. She dove from a one-foot square perch, 80 feet up, into a tank used for whale, dolphin and sea lion shows. She was the only female at the parks who would do the high dive.

“I thought I could pull off diving and track in college, but was training two hours in the morning, two in the evening, and then had to find time to study. I chose to concentrate on diving. I love the feeling of floating through the air, and the grace and beauty of diving,” she said. 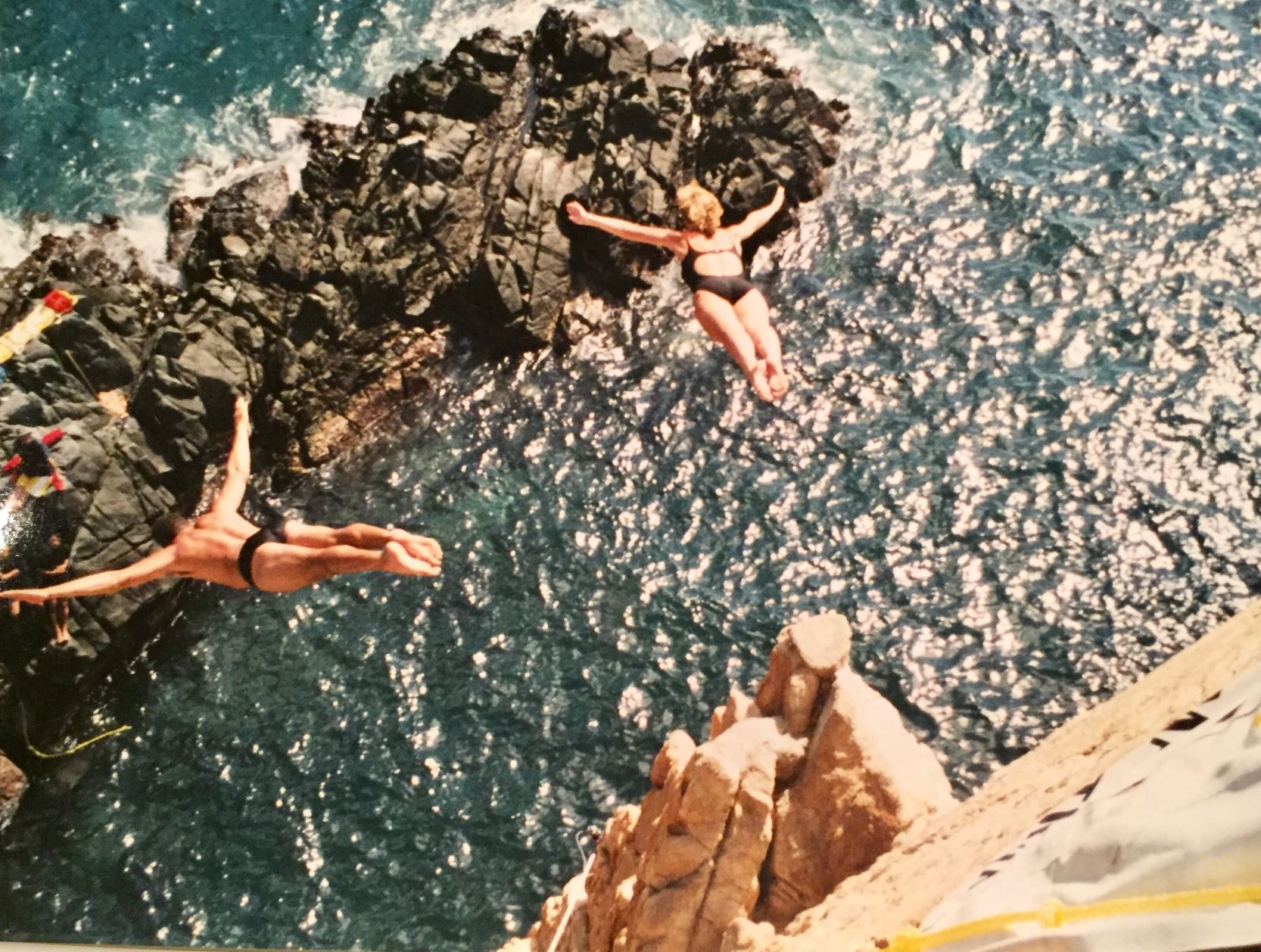 Streeter and high-dive coach Chip Humphrey training in Acapulco in 1997.

In 1980, and again in 1981, Wardle Streeter won the Western Athletic Conference Championship in both the one- and three-meter dives. That led to her decision to pursue a professional high-dive career.

“I wanted to be paid for diving,” she said. In her junior year, she left BYU to dive for three years at Ocean Park in Hong Kong, where she set the women’s high dive record. During this period she also performed in Japan, Holland, Canada, and England.

During the summer of 1986, she worked at Disneyland. “Goofy was the star. I was part of a Keystone Cops-style act. I dove from a 70-foot perch into nine feet of water.” She also did an evening dive, wearing a blazing bodysuit that was extinguished when she hit the water.

In 1987, Lucy Wardle married Greg Streeter, whom she met when she was 15, and he was managing a Rancho Palos Verdes gas station. He now owns Miraleste Automotive. Greg remains Lucy’s “greatest support and best friend,” enabling her to “raise kids and have all of my crazy experiences,” she said. The two had three children in quick succession: Jake, Madeline and Luke.

In 1996, she competed in the first-ever, all-female cliff diving contest in Acapulco, placing third. Previously, Acapulco cliff diving was restricted to men. In 1997, the entertainment program American Journal flew her back to Acapulco to dive again, this time at night, by torchlight, in what was the first-ever Alcapulco night dive by a woman. “It took a week of shooting me enjoying the sights and flavors of Mexico, along with that one night dive to fill what ended up as a 3-minute on-air segment.”

Even in her personal life, she looks for adventure. One day in 1998, the family was motoring around Long Beach Harbor in their powerboard, Junkyard Dog, when she spotted bungee jumpers on the Queen Mary. She’d never done it before. “I stuffed money into my bathing suit, swam over to the Queen Mary and did it. It was a 200-foot bungee,” she said.

Another day, while her husband was on the golf course, she called him to say, “I just wanted to let you know I landed safely.” She had accepted a last-minute invitation to jump out of an airplane.

Since 2008, Wardle Streeter has been promoting beach tennis, a sport popular in Brazil, and now popular in Hermosa Beach,  Manhattan Beach and Santa Monica. “It’s easier on adult joints than other sports,” she said. She’s become one of the top U.S. women and has competed professionally in Aruba, Bermuda, and Florida.

Streeter’s last professional dive was the World Record Mass High-Dive, in 2017. The Red Bull event featured 27 people diving simultaneously off the 70-foot cliffs of Hell’s Gate on Possum Kingdom Lake, in Texas. Unfortunately, the event was not listed in Guinness because one of the divers broke her pelvis when she hit the water. “She wanted to try again,” Wardle Streeter said, but so far there are no plans for a repeat.

Streeter began teaching swimming at the Jack Kramer Club when she was 15, and later in her home pool. She stopped teaching five years ago to focus on her seven grandkids. Her mother Estelle recently passed away, at 94, leaving 26 grandkids, and 71 great-grandkids.

She spends time with her grandkids, and working with a youth group through The Church of Jesus Christ of Latter-Day Saints.

“I’m a big kid,” she said. “I like to play games, I like to have fun, to help people, and I think kids feel that.” She still jumps off 40-foot cliffs, but now it’s with family and friends, feigning fear to the delight of hecklers who think they’re teasing a grandma. They are shocked when she makes a perfect entry following a somersault dive. PEN