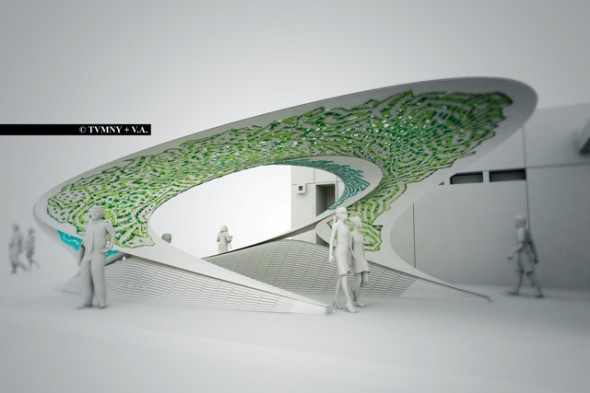 A large wave, albeit one made of aluminum and wood, is about to break on Kingsdale Avenue.

The Redondo Beach City Council on Tuesday night served as a de facto art jury and selected “Gate Wave,” a large public artwork that will be built later this year alongside the new transit center adjacent to the Galleria Mall in North Redondo Beach. “Gate Wave,” designed by artists Volkan Alkanoglu and Marc Fornes, was chosen among three finalists winnowed down from 10 submissions by the city’s Public Art Commission.

Councilman Steve Diels said the sculpture would dramatically announce to people arriving on buses, and perhaps one day trains, that they are in Redondo Beach.

“I can see people wanting to take their pictures next to this,” Diels said. “…People will know you have arrived – that when you get off that bus, you know you are in Redondo.”

“These are all great pieces,” said Councilman Bill Brand. “I’m not an artist, but I’ve been a lot of places all over the world, and when you see something like this, it labels the place.”

The other two finalists were “Re-Route,” a somewhat more low-key series of three abstract “urban totems” by artist Kathleen Caricof, and the staff’s selection, “Catching the Bus,” a 5,000 pound 17 foot high spherical sculpture made out of a swirl of stone-carved buses intended to infuse whimsy into buses while making the connection between urban transit and a school of fish.

Gate Wave had to overcome two significant objections: its potential attractiveness as a skateboarding ramp, and the fact that it lapped beyond the constraints set forth in the Request for Proposals.

Alkanoglu identified himself as a former skateboarder and said that the etched surface of the wave would not be ride-able.

“I know you can’t skate this thing because you have gaps between the timbers,” the artist said. “You don’t have a surface to skate on, and that is what skaters need.”

Brand, also a former skateboarder, disagreed. But he said he felt certain that minor alterations could be made to discourage skateboarding. “I know small fixes you can do that will alleviate the skateboarding concerns,” Brand said.

Maggie Healy, the acting director of Recreation and Community Services Department, said the staff did not chose “Gate Wave” because it was not located within the areas demarcated for public art in the building’s design.

“The piece is not designed to the specifics of the RFP,” she said. “It would require some redesign of the actual building.”

Alkanoglu, who is also an architect, said he’d consulted with the building’s architects and was told the art would not interfere with the footprint of the building.

“The architects said we don’t really mind where it goes…I think there is no need to kind of re-plan anything,” he said. 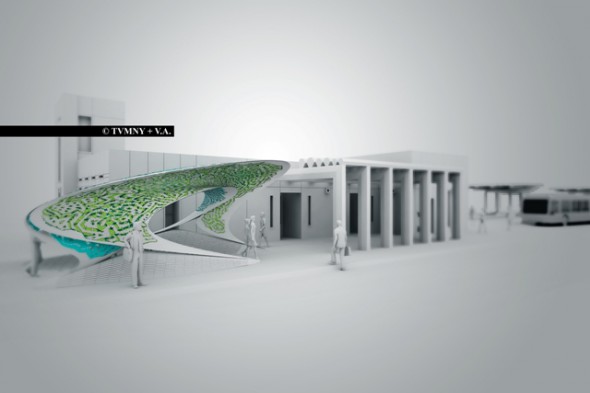 Another model showing 'Gate Wave' in relation to the transit center.

Councilman Steve Aspel had a different objection – with himself as an art critic. He said the totems reminded him of Easter Island and the wave of the Jetsons. He did acknowledge “waves are cool, totem poles are cool” but deferred artistic judgment to the staff.

“My taste in art stopped at Grateful Dead posters….I can’t be the judge of art,” Aspel said.

The council approved “Gate Wave” in a 4-0 vote, with Aspel abstaining.

The project, which costs $75,000, will be funded through a combination of federal, state, and county transportation money that is funding the transit center itself. Both will be completed by this fall.

The “Gate Wave” design is 13.5 feet at its highest and almost 50 feet wide at its base. It will be constructed with concrete footings, a timber frame substructure, anodized aluminum in four total layers, with cyan and lime colorations on the interior aluminum and white on the outside. The artists, though young, are quite well regarded – Alkanoglu has taught at Harvard, Princeton, and SciARC, and a large installation piece by him and Fornes is featured at the Centre Popidou in Paris.

“We actually have a lot of experience with this kind of construction,” Alkanoglu said.

Public Arts commissioner Paul Mose, who has worked professionally in the sculpture industry, praised the design team and suggested that “Gate Wave” would likely find its way into such publications as Sculpture magazine and Art in America.

“It’s very close to the public – they can touch it, climb on it, they can do whatever,” Moses said. “This artwork is one that will become a place-maker.”

Councilman Matt Kilroy expressed satisfaction that the city’s public art program – which includes new work at the North Branch Library and the Esplanade – is beginning to take off.

“We are actually getting art in the city,” Kilroy said. “This is amazing.” ER