Redondo avenged its lone loss of the 2009 regular season by defeating Mira Costa for the first time on Mustang turf. The explosive offense of the Sea Hawks put up nine unanswered goals by halftime before defeating their cross-town rival 13-4. 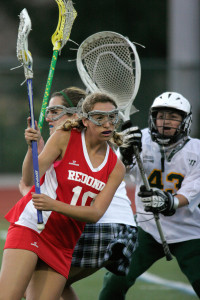 With the victory, Redondo remained undefeated in Bay League competition as the squad – in only it fourth year of existence — prepares for a deep run in the playoffs.

“Our goal right now is to win the last three Bay League games, to go undefeated in Bay league and win our second League Championship in a row,” said Tom Borgia, who serves as co-head coach alongside Erin Garnsey. “The girls would have never dreamed that would be possible two years ago, after only winning 4-5 games in their first two seasons.”

Borgia stated that the Sea Hawks have changed their strategy as the post season approaches and the team makes a title run for the North Division of the Southern Section where the champion will advance to face the Orange County champion in the final.

“In the last few games we have been trying to play a slower game on offense by focusing on ball control and keeping possession,” Borgia said. “We probably could have scored another 4-5 goals in each of our last Bay League games but we really wanted to work on our ball control rather than just be a Run ‘N Gun team whenever we get the ball. When we advance in the playoffs, I believe possession is going to be crucial in winning games against quality teams.”

Redondo (12-1, 10-0) is ranked ninth in the Southern Section behind eight teams from Orange County, including Los Alamitos which is ranked No. 1 in the state.

“Los Alamitos has won something like 40 games in a row,” Borgia said. “Compared to where our program was a few years ago, just getting to the final would be a huge accomplishment.”

Redondo High distance runner Chloe Curtis had already clocked the nation’s fastest time in high schools girls 800-meter competition this year, so the senior wanted to prove her performance was no fluke by placing first in an elite field of competitors at the 43rd Arcadia Invitational last weekend.

Running in the country’s largest track event held by a single high school, Curtis was slightly off her top time of 2:09.07, finishing a disappointing second with a mark of 2:10.73. Not wanting to go home empty handed, the loss inspired her as she anchored the Sea Hawks’ distance medley team to a first place finish.

Both schools are scheduled to compete in the Mt. SAC Relays tomorrow and Saturday. 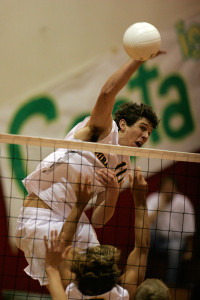 Eric Mochalski and the Mira Costa Mustangs are flying high as the No. 1 ranked team in the CIF Southern Section Division 1 poll . Photo by Ray Vidal

Mira Costa, which hasn’t lost to Redondo since 2006, rallied from a 23-21 deficit in game three to defeat its rival. Eric Mochalski had 13 kills, Kevin Donohue added 11 kills and Bryce Miller recorded 23 assist for the Mustangs.

Redondo was led by Riley Theunissen’s 12 kills and nine digs. Ryan Olson and Trevor Butler each had nine kills and Michael Vellutato posted 29 assists for the Sea Hawks.

Mira Costa hosts Peninsula today at 3:15 p.m. and has a showdown at second-place Palos Verdes Tuesday at 5:15 p.m. Between the two Bay League matches, the Mustangs will compete in the prestigious Santa Barbara High School/Karch Kiraly Tournament of Champions tomorrow and Saturday.