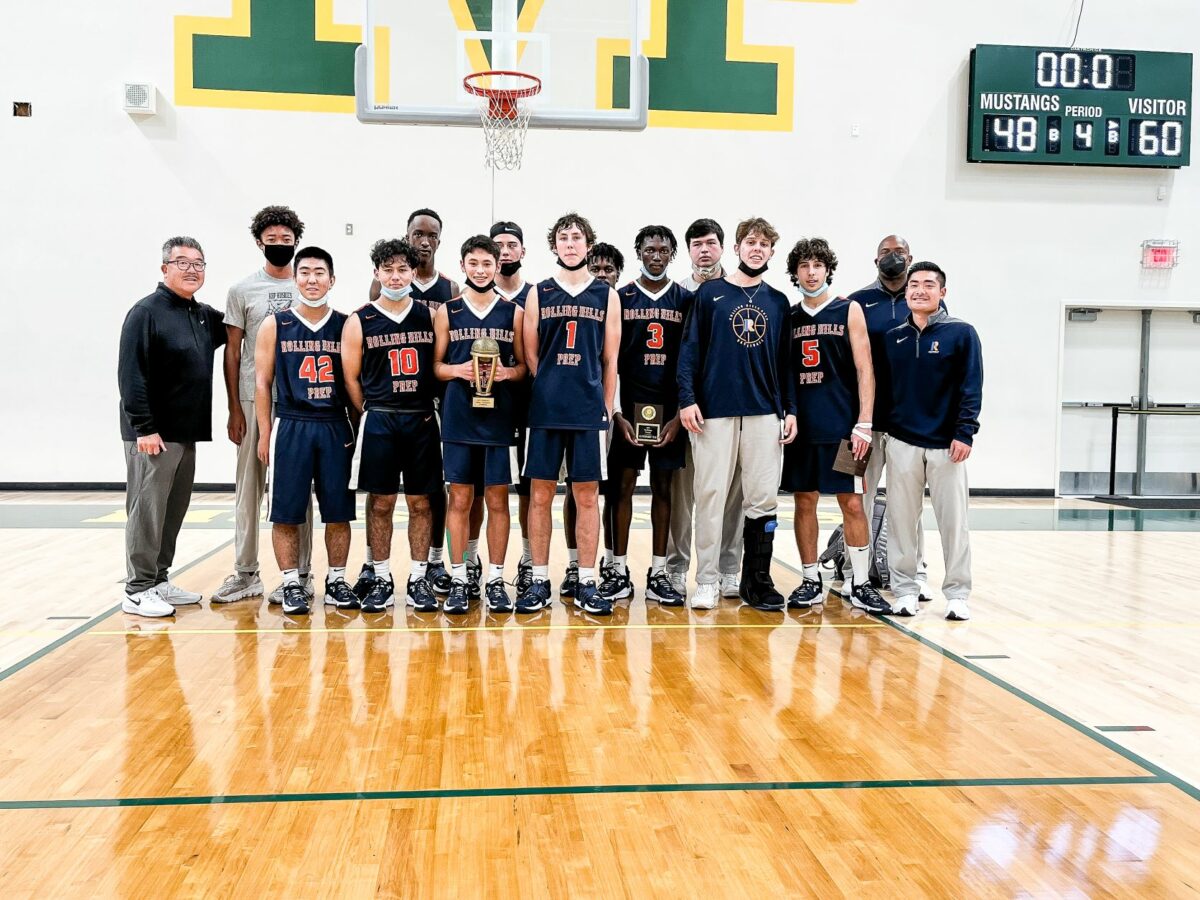 Rolling Hills Prep and Mira Costa High both had perfect records when they met last month in the finals of the prestigious Pacific Shores Tournament, held at Fisher Stadium, Mira Costa’s new $40 million gym. Rolling Hills was 7-0. Mira Costa was 9-0.

Rolling Hills was favored. The LA Times ranked it 8th in its Top 25 Prep Teams. Costa was unranked, but had the benefit of a gym jammed with fans.

Throughout the roller-coaster first half the two teams traded basket-for-basket.

Costa point guard Will Householter, who is destined to lead the Bay League in floor burns thanks to his physical, all-in play, finally looked like the all-league player he was the last two years before having to sit out 10 days just prior to this season because of a non-Covid illness.

The crafty, 6-foot-2 lefty came out firing. In the first minute he grabbed a rebound, went up in heavy traffic, and somehow found a way to spin it into the hoop. Next time down he drove hard for a get-out-of-my-way layup for a 4-0 lead.

Householter hit on another power drive and then pulled up for a long 3-pointer. Combined with a single foul shot by fellow junior guard Dylan Black, the Mustangs took their biggest lead of the game, at 10-7.

The home crowd was loving it, hopeful they were watching an upset in the making. Meanwhile the much smaller visiting Huskies looked nervous.

But the Huskies fought back behind point guard Benny Gealer and 6-foot-8 board beast Kenny Manzi to tie the score 12-12 at the end of the first quarter.

Then the 6-foot-2 Gealer, who up to that point had been content to let Manzi and 6-foot-6 Seydi Thiombane carry the scoring load by controlling the boards, showed why he was offered – and has accepted — a full scholarship to play for Stanford in the PAC-12 next season.

He hit a 12-foot, baseline jumper to take a 14-12 lead. After that was answered by a three-pointer from Costa junior, 6-foot-3 Nick Lundy, Gealer scored again.

He raced down-court, and pulled up from 2 feet in back of the 3-point line and swished a deep 3-pointer that drew oohs and aahs from the crowd – on both sides of the gym.

“When he started hitting Kobe-like shots I knew we were going to have a tough night,” Costa Coach Neal Perlmutter said.

The Huskies lead grew to 19-15 until Householter connected on a trifecta to pull within 19-18. The pace of the game caught fire now as Manzi hit a stick-back, Householter lofted yet another 3-pointer, and Lundy spotted up in the right corner for a 3-pointer of his own that matched Costa’s biggest lead at 24-21.

Rolling Hills Prep coach Harvey Kitani called a time out to rally his team, Gealer quickly swished another pull-up 3 to tie the game at 24-24. Mira Costa junior Trey Pearce, a 6-foot-6 red-headed bomber, came off the bench to nail a 10-foot jumper from the left side that tied it at 26-all. Then, a few seconds before the halftime buzzer, Gealer did it yet again. He raced past half-court and pulled up for a long 3-pointer – his fourth of the half — that gave the Huskies their 29-26 lead heading into the locker room. Householter was almost as hot, piling up 15 of the Mustangs 26 points.

The second quarter had been so fast and furious that the crowd seemed dazed as they staggered out of their seats to catch their breath, and debate just how good Gealer will be at Stanford next year in the highly competitive PAC-12.

“I think he’ll do great at Stanford,” Perlmutter said. “He’s athletic, he’s smart, he’s efficient, and he has a lot of moves to get open. Plus he never comes out of the game and he never seems to get tired.”

Costa’s game plan was to try and contain Gealer and force him into bad shots, but a rotating cast of defenders – led by Householter ,and Black in the first half, and Jesse Waller in the second half – never could get him completely under control.

After nailing four treys in the first half, Gealer was double and triple teamed whenever he got the ball.

“Our goal was to deny him the ball and wear him down,” Perlmutter said.

But Gealer showed another aspect of his game with several nifty passes to teammates – usually Manzi and Thiombane – who worked their way free under the basket while their defenders were helping out on Gealer.

Midway through the third quarter, the Huskies ripped off a 9-3 run, which opened the gap to 9, at 42 to 33. The end result was a 60-48 win for Rolling Hills Prep, which didn’t reflect just how competitive this game was, especially in the first half.

“Gealer was able to burn us by finding the open guy,” Perlmutter said. “He’s not just a shooter.”

Gealer finished with 20 points – the third time he reached at least 20 points in his four tournament games — and was named the Pac Shores MVP. He was backed up by Thiombane with 16 points and Manzi with 15 points.

The Mustangs’ Householter finished with a team-high 19 points. Lundy, who matched Gealer with four 3-pointers of his own, tallied 14 points and was named to the All-Tournament Team in recognition of his solid inside-outside play all week. Pen