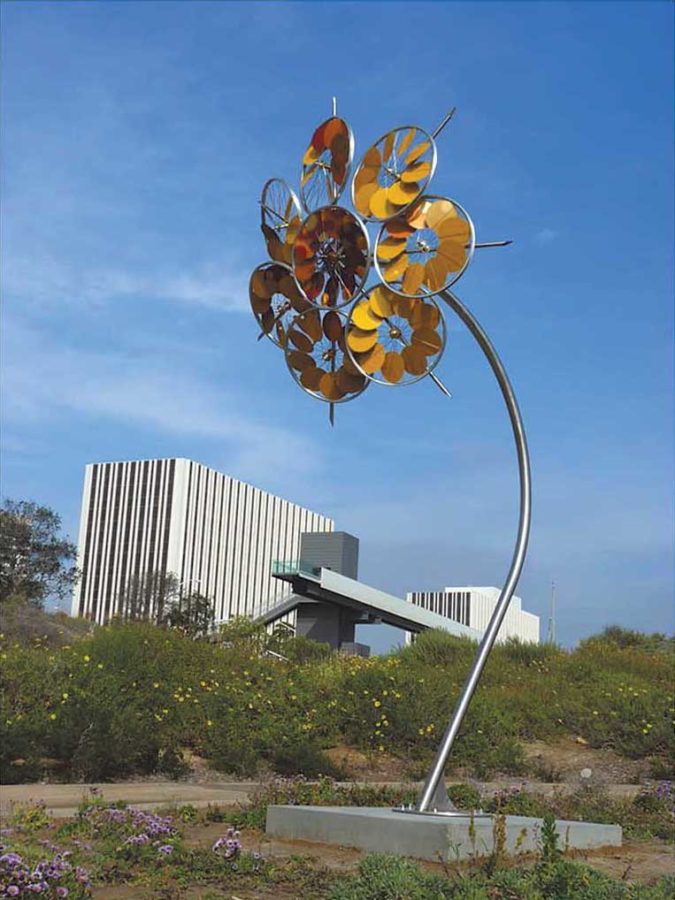 “Sunflower,” by artist Patricia Vader, is among the new art that will soon arrive as part of the city’s sculpture garden program.

A profusion of new public art will adorn locations throughout Manhattan Beach in coming months. The City Council, in its final meeting of 2018, approved four new works of art as part of the city’s existing sculpture garden program, along with 13 utility box paintings, and a signature Catalina Classic paddleboard sculpture that will rise dramatically near the foot of the pier.

The expansion of public art citywide is a step towards Mayor Steve Napolitano’s stated goal last year to make Manhattan Beach “the Florence of Southern California.” Other than the Catalina sculpture, which is being commissioned by the South Bay Boardriders Club, all the new artwork derives from more than $1.4 million in developers fees the city has earmarked for art.

But if the council has been focused on increasing the amount of art in the city, it has also been particular about what kind of art. Last May, the council nixed a proposed donation of the iconic “LOVE” sculpture at the pier. In September, the council rejected four new sculptures the Cultural Arts Commission had selected among the 60 submissions for the city’s sculpture garden program, which is located largely near the Civic Center and Metlox Plaza but will expand to new locations this year.

And so on Dec. 18, Cultural Arts Manager Martin Betz returned to the council not only with four new sculptures proposed as two-year rentals but with a proposal to buy a fifth and accept the donation of a sixth. His, and the Cultural Arts Commission’s, marching orders after the council’s previous rejection had been to select sculptures that were more “whimsical, movable, and colorful.” Betz arrived with sculpture renderings full of whimsy and color and a little bit more movement.

Napolitano and his colleagues were largely pleased with the new crop of art.

“I really appreciate the redirection and the collaboration of the Arts Commision, and the willingness to take these on after our last discussion,” Napolitano said. “I think they have chosen better pieces.”

“It’s funny, art is so subjective, and we all have different reactions,” said Councilmember Amy Howarth. “But I do believe you and the commission have come back with much better alternatives.”

Art by Emily Brantley, one of 13 utility box artworks approved by the City Council

The council expressed a desire to place sculptures in locations outside the Civic Center area. Napolitano said he thought existing locations were overly concentrated in somewhat underutilized areas.

“I’d really love to see more [art] at Veterans Parkway or Polliwog Park or Live Oak Park, where we get more traffic going by, not just foot traffic but vehicular traffic, as well, so they get more eyes, get more exposure,” he said. “And there is more bang for the buck we are getting for it.”

Artist CJ Rench submitted two sculptures that were proposed for the Civic Center area near the police station, “Us 3” and “Circels.” Both are made of stainless steel ovals, the former in shiny silver and the latter bright red. “I try to use bright and bold colors in my works, after all, life is colorful, joyful and exhilarating why shouldn’t your art be?” Rench said in his artist’s statement.

The council indicated a preference that the bright red ovals be located elsewhere, at a spot to be decided later, but likely either on the parkway (at the Greenbelt at Second and Ardmore) or in a park. “Us 3,” meanwhile, will replace the “Puff of Wind” sailboat sculpture.

Artists John and Nico Meyer’s “Emergence” will be located on Metlox Plaza. The sculpture fulfills the council’s desire in that it is a 9-foot high whirling set of interwoven rings, or as the commission said its notes a “kinetic…fun, mobile” piece of art. The piece will replace “Dragon Tails,” another sculpture with moving pieces, which will be purchased for $13,000 and moved to 2nd and Ardmore.

Artist Peter Mitten’s “Momentum” will be located in the south part of the Civic Center area, near the library. It lacks the color and whimsy of the other pieces but rather is what Howorth described as like the monolith in the film “2001”, a stark, 6 foot high set of pieces made of fabricated aluminum.

Artist Patricia Vader’s 14-foot high aluminum and steel “Sunflower” fulfills all the council’s directives. It’s whimsical and bright colored and sways with wind, and will also be located in a previously art-less location, at Water Wise Park at Aviation Boulevard and Nelson Street.

Artists Margaret Lazzari and Lauren Evans’ “Egrets in Flight,” another colorful sculpture currently located at City Hall Plaza, has been donated and will be moved to another new location, the Manhattan Beach Botanical Gardens in Polliwog Park.

All the new sculptures will be essentially rented for two years for $12,000. Meanwhile, a striking, 18 foot high bronze sculpture, valued in the hundreds of thousands of dollars and honoring the Catalina Classic paddleboard race, is being commissioned the South Bay Boardriders Club and donated to the city (see the story in Dec. 20 Easy Reader).

Another art program long in discussion will also come to fruition in the new year, as the council approved 13 wraparound pieces of art which will be applied to utility boxes throughout the city. The art ranges from underwater scenes to sailboats and dancers to a postcard, a beach umbrella, and portraits of lifeguard stations. All are bursting with color, and will be located along main city thoroughfares including Rosecrans, Manhattan Beach Boulevard, Highland, and Sepulveda. The total cost for all the art is $19,500.

Betz said among the remarkable aspect of the 56 submissions was not only the high level of artistic quality, but the fact that almost all were by local artists.