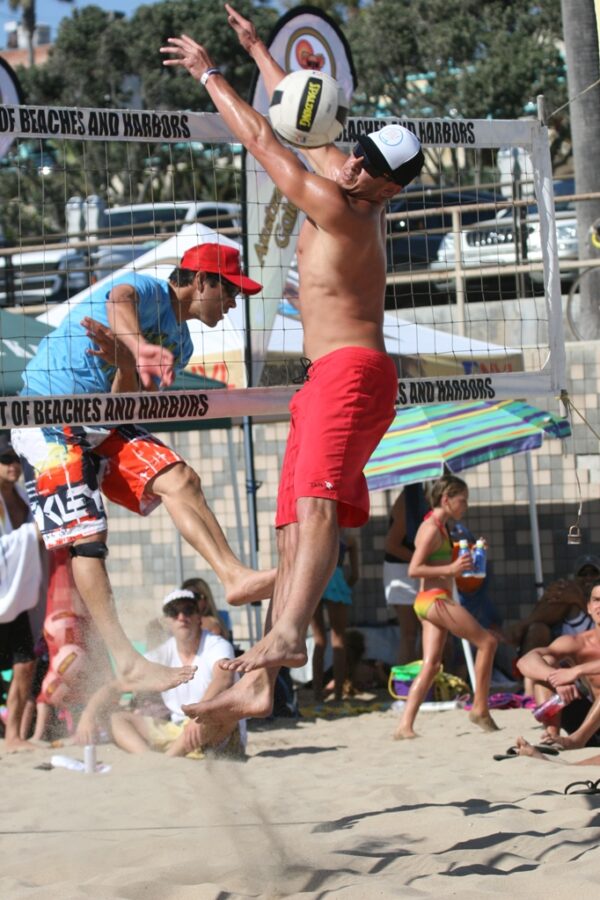 Eric Fonoimoana takes advantage of another perfect set from Casey McGarry to blast the ball past Landen Tusieseina in the finals of the Dig for Jimmy Surf and Turf. 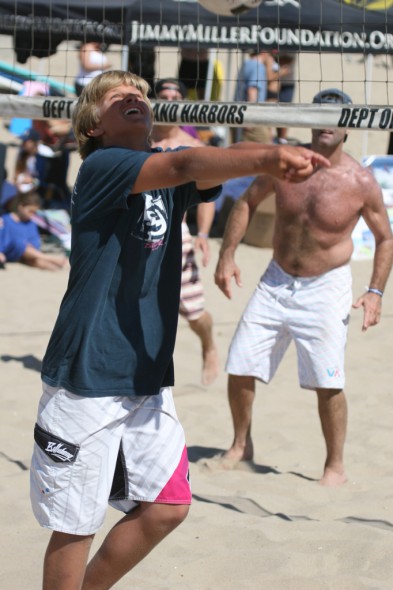 Casey McGarry doing the heavy lifting for Eric Fonoimoana during Sunday’s Dig For Jimmy Surf and Turf at the Manhattan Beach Pier. Photos

American Martyrs School seventh grader Casey McGarry was asked if he thought he’d ever again get to set for as great an outside hitter.

The question was posed to the 12-year-old while he and his teammates accepted the first place trophy in the volleyball division of the Second Annual Dig For Jimmy Surf and Turf Sunday night (May 1) at Sangria.

McGarry’s hitter during the 20-team tournament at the Manhattan Pier earlier that day was Olympic Gold medalist Eric Fonoimoana.

“If you’d had setter like Casey, you’d have two gold medals,” a member of the audience yelled at Fonoimoana.

The awards party comments were characteristic of the event that teams some of the South Bay’s best and some not so good surfers and volleyball players in a morning surf contest followed by an afternoon volleyball tournament. The day benefits Dig For Kids, founded by Fonoimoana and the Jimmy Miller Foundation, founded by Jim and Nancy Miller in memory of their son Jimmy, a surfer and lifeguard who lost his life to mental illness.

“It’s like a reunion. It’s what we did growing up,” said Fonoimoana, on the May Sunday that felt like mid summer, with a waist high wind swell and blistering hot sand on the volleyball courts. Fonoimoana surfed and played volleyball with Jimmy Miller at Mira Costa High School.

Surfers Alex Abad and John Fox rounded out McGarry’s and Fonoimoana’s team, which defeated Landen Tusieseina and the Silva family – Mark and Diane and son Dayton in the finals. 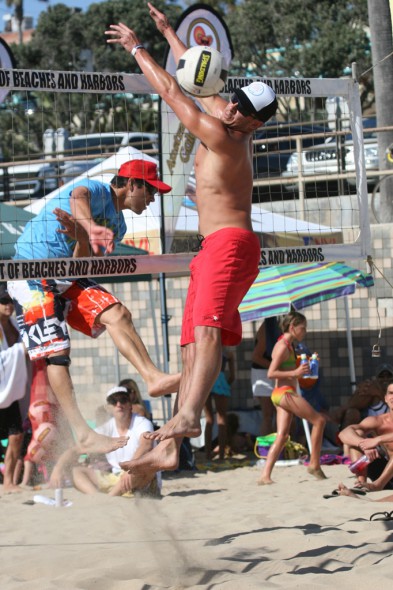 Eric Fonoimoana takes advantage of another perfect set from Casey McGarry to blast the ball past Landen Tusieseina in the finals of the Dig for Jimmy Surf and Turf.

Dig 4 Kids is an after school program that offers academic and athletic instruction to students in low-income communities. For more information visit Dig4Kids.org.

The Jimmy Miller Foundation provides ocean therapy for the physically and mentally ill, including military veterans. Each Saturday this month Jimmy Miller volunteers are offering surf lessons to wounded veterans from the Veteran’s Hospital in West Los Angeles. For more information visit JimmyMillerFoundation.org.

The Redondo Union High Ohana O’ Kekai Club will present the South Bay premier of Drop Zone: Fiji at the school auditorium at 6:30 p.m. on Friday, May 13. Proceeds will benefit the Jimmy Miller Memorial Foundation.

Drop Zone: Fiji follows Body Glove team surfers Alex Gray, Cheyne Magnusson, Maria del Mar, and Holly Beck, on a surfing and diving trip to Fiji, where they explore some of the world’s best waves and dive with bull sharks.

Gray will talk about his experiences in making the film and surf photographer Bryce Lowe-White will present a surf slide show.

Tickets are $5 dollar and are available from Ohana O’ Kekai members, at Dive N’ Surf, and at the door. See the Dig For Jimmy photo gallery.