The End in Torrance is a ‘Side Street Wonder’ 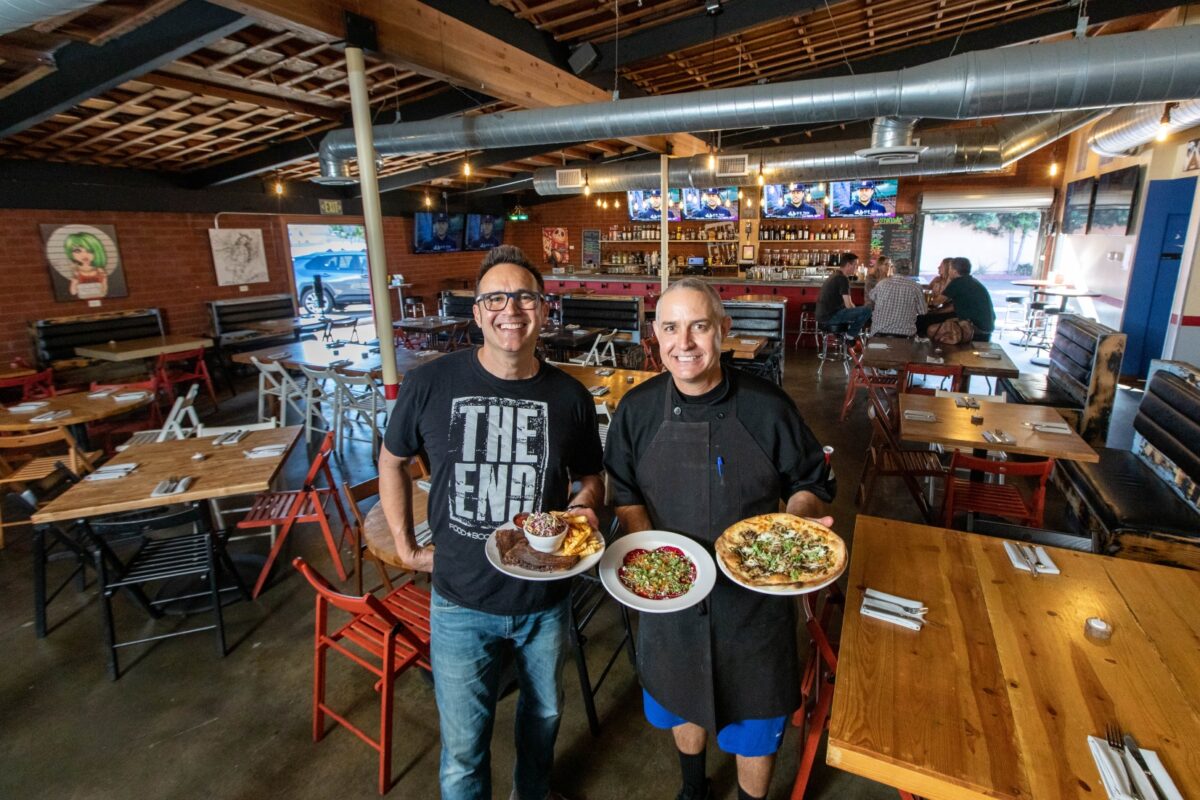 An eclectic bar and grill sparks thoughts of earlier eras

When I visit old cities, I find it charming that most residential neighborhoods have their local cafe, bakery, pub, and some little shop that sells the necessities of everyday life. It’s a relic of a world before the automobile, when neighbors met and socialized in the course of their everyday lives. That little eatery or bodega might not have the widest selection or the best prices, but the people inside were part of a community. I recognize the downside of this situation, the lack of variety, the necessity of coming in contact with people you may not like, but it’s the way most people in the world lived until a few generations ago.

South Bay businesses are so clustered around major arteries that the little side street business is a curiosity. Granny’s Grocery in Hermosa and Panela’s in Redondo are among the few culinary enterprises surrounded by places where people live. To those may now be added The End, which is not on a major street even though their address is on Calle Mayor, Spanish for Major Street.

For a long time, this location was a Jamaican restaurant, then briefly an Eastern European schnitzel house, before it became an eclectic restaurant and bar called Hey 19. That place was popular enough to attract a clientele from a wide area, but frequent kitchen staff changes led to a reputation for erratic food. I figured that whatever moved in next would likely be consistent and dull.

I was wrong on the dull part because the new establishment, called The End, has quite a bit of character. The main room is still barnlike but brighter than before and decorated with whimsical, original art. The acoustics need some work, but luckily both recorded and live music were at a relatively low volume. The place feels like a popular bar and grill in a college town.

The menu is annoyingly artistic, more focused on a pretty design than on ease of use, but the online version actually uses readable fonts and colors. These reveal a curious mix of bar snacks, tacos, pizza, and barbecue, with not a burger to be seen. It’s a craft kitchen, with housemade pickleds, smoked meats, and fresh pizza dough, It’s not quite like anyplace else in the area.

The execution of almost everything we tried was solid, though the portion sizes on some items were meager. The house pickle plate was not the pickles we were expecting with vinegared carrots, jicama, green beans, brussels sprouts, and pepperoncini, rather than cucumber. The zesty spiciness reminded me of Italian giardiniera, and the size was adequate for a party of three. An order of onion rings was even better, sliced very thin and dipped in an herbed batter before being flash fried. If you prefer the thick cut style with the vegetable just cooked through, these aren’t for you, but if you like the crunch and burst of flavor, get these. 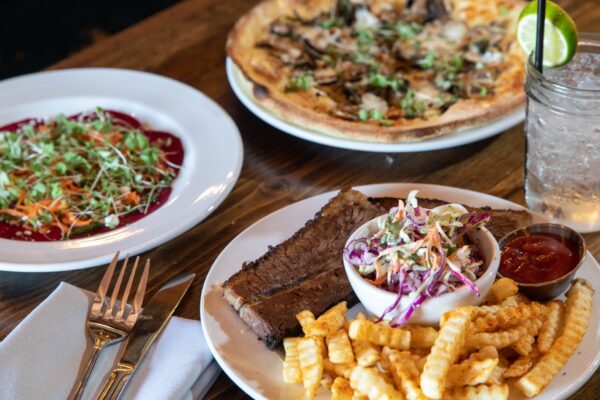 Those items were worthwhile, but the price to quality ratio was off on the beet carpaccio. It was a beautiful plate, paper thin slices of roasted beet topped with dabs of a “no nut” pesto, and a scattering of goat cheese, sunflower seeds, and alfalfa sprouts. The flavors were excellent together, but there wasn’t much food on that plate for $13. This would fly at a white tablecloth restaurant where you’re paying for the lavish setting, or at a beachfront space where you pay for the view, but we were at a bar and grill on Calle Mayor.

The mushroom pizza we ordered passed the test with flying colors, because that housemade crust was really excellent, light and crisp with big bubbles around the edges. The cheese, mushroom, and herb topping was very nicely balanced, and if you’re looking for a meal for one or an appetizer for four, it’s a must-have.

The barbecue items are very good too, easily the best in a restaurant setting in the South Bay. We ordered a three-meat combo called “The Rock” that isn’t on the menu, but is apparently often available, and received two slices of brisket, half of a small chicken, and some pork belly with fries and slaw for $55. The brisket was very tender and flavorful with a gentle smoke flavor, and had extra zest from a peppery spice rub. The chicken and pork arrived already sauced, which is not the way I prefer it, and if you order barbecue here, I suggest you ask for that on the side. That’s not because the sauce is bad, because it’s fine if you like yours mildly sweet and spicy, but it’s nice to be able to just savor the flavor of the meat. We were happy with all of them, and with the seasoned fries and exceptional cole slaw. This had less mayonnaise and a wider array of vegetables than usual, and is highly recommended. Given the high cost of meat and the time and effort involved in cooking it this way, the price is justified, and there’s enough for a very good dinner for two.

The tacos at The End use the smoky brisket to good effect, and the topping of sprouts adds a nice extra texture and grassy flavor. The pico de gallo that tops them is heavy on the jalapenos and should be requested on the side if you are at all spice averse, and servers should warn the unwary. We liked the ahi version too, though in both cases the plate was a bit bare for the price. At $14 for the brisket, $16 for the ahi, there should have been some vegetables, salad, or something else to round out the entrée.

Drinks at The End have evolved for the better. They opened with a menu heavily slanted toward house infusions, some of which were gimmicky and unbalanced. The current offerings include some very good original items, including the Joy Division of gin, dry vermouth, and triple sec with a touch of absinthe. I don’t think of that ‘80s band as catering to the cocktail crowd, but this homage is particularly nice.

We weren’t attracted to the brownie or fruit tart that were offered at the end of the meal, and the fresh churros weren’t available either night, so we finished the evening listening to a good acoustic guitarist and sipping the last of our cocktails. When the co-owner stopped by our table, he said they plan to roll out more menu items in coming weeks, including housemade pastrami. The End is good now, and has the potential to be great.