Sign of the times: group’s totem taken, held for ransom 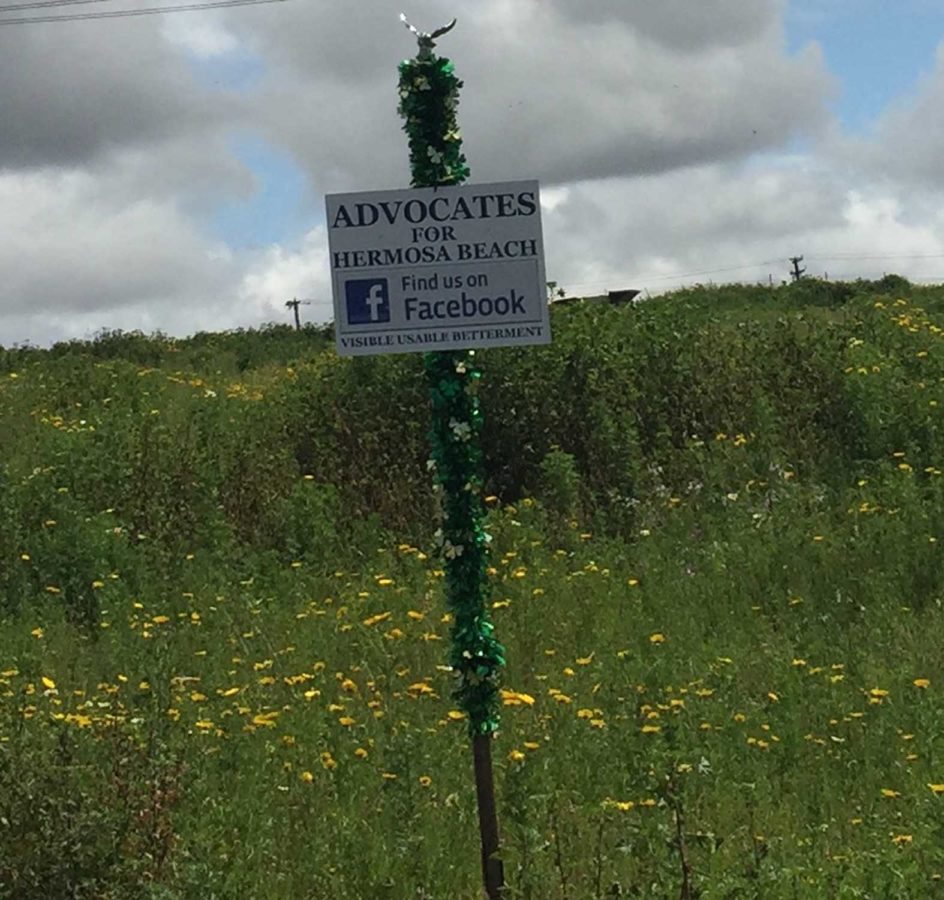 It started with a car that wouldn’t start. And it continued an internet feud that is unlikely to end any time soon.

Last month, a sign for the Facebook group Advocates for Hermosa Beach disappeared. Then, last week, Hermosa Beach resident Trent Larson, an active member of the group, received a letter in the mail. Inside was a note, written in what appears to be a computer font imitating the style of cutout magazine letters sometimes used by kidnappers to send ransom notes. The letter demanded that, in exchange for the sign’s safe return, Advocates for Hermosa Beach make a public statement in favor of the Greenbelt stormwater infiltration project.

“A4HB needs to back this project publicly on FB before it’s too late…for the project and your ‘work of art,’” the letter stated.

Larson, as well as many residents living in the southern edge of town, had spoken out against the Greenbelt project as too big and potentially harmful of property values. It is unclear whether the writer of the letter was in earnest about the threat; by the time the letter was sent, the City Council had already signaled an intent to move away from the Greenbelt project.

But Larson, who had intended to simply write off the missing sign as a loss, said receiving the letter made the theft feel like an attack. Larson and another member of Advocates for Hermosa interviewed for this story said that they have an idea who took the sign, but declined to name the person they think is responsible.

“I think they’re trying to be too cute: ‘Oh, this would be funny to send them this full ransom note,’” Larson said. “It’s funny, but it’s really not funny.”

Advocates for Hermosa Beach is a political Facebook group with a slogan of “Visible Usable Betterment.” In an interview, Larson, a previous candidate for City Council, said the group was intended to provide a place to develop and exchange conservative-leaning viewpoints that its members feel are marginalized on the Hermosa Beach Forum, a larger local issues Facebook group.

Advocates for Hermosa secured a spot in this year’s Hermosa Saint Patrick’s Day Parade, and Larson and other members were intending to display the sign from Larson’s car. But on the morning of the parade, Larson’s car wouldn’t start.

Still wanting to get the word out, Larson put the sign on a pole, and stuck it in the northwest corner of the vacant lot at North Francisco Avenue and Herondo Street — facing traffic and just over the border in Redondo Beach. (The location is also across the street from the proposed location of the Greenbelt project.) The sign was decorated with glitter, Larson said, and was capped off with a chrome eagle ornament.

For several days, Larson put the sign out in the morning, then returned in the late afternoon to take it in for the night. On March 22, he dropped the sign off about 10 a.m. When he returned, about 5 p.m., the sign was gone.

Larson said that he spent about $75 on the sign at Vista Print, and that the eagle ornament was worth about $50. He has not contacted the police about the issue, but said that he did call the City of Redondo Beach to ensure that one of its employees hadn’t picked it up.

The letter was postmarked April 6, and arrived at Larson’s home on April 8. On April 9, Larson announced the theft and receipt of the note during public comment at a City Council meeting; later that night, the council voted to move toward funding a study for a possible alternative to the infiltration project, located, coincidentally, on Francisca.