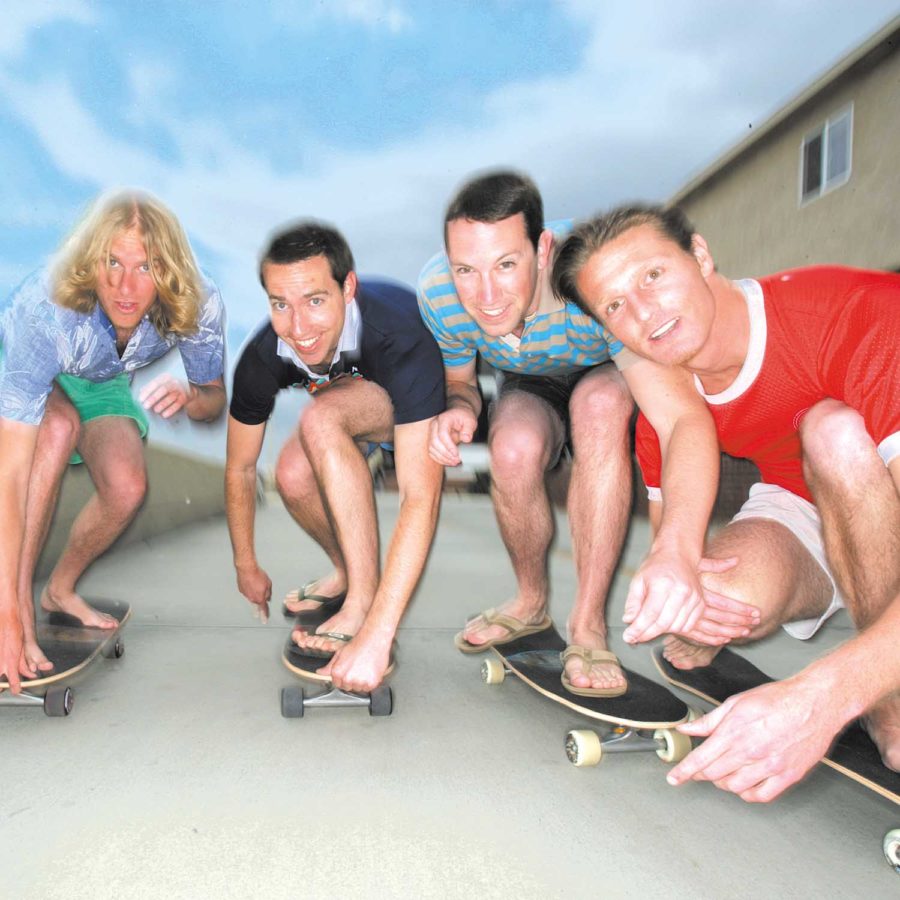 Gavin Heaney was in his second year at Mira Costa High School and still a little bit jittery about the whole social situation when a tall pink-haired guy approached him one day in the fall of 1993.

Heaney was shocked. He knew who the pink-haired guy was — a junior named Eric Lyman, who was the frontman for a fledgling punk band that was already pretty much the coolest band around. What he was surprised about is that Lyman knew who some lowly sophomore was. He almost yelped the words “Yeah, man!” even while trying not to appear too eager. But he was definitely all in.

“Can you imagine going into high school a pretty awkward sophomore and suddenly being a made man with the most popular band in high school?” Heaney recalled. “It was awesome.”

“I think I just grabbed him in the hall,” Lyman said. “Someone said he played bass, and I was like, ‘That kid over there? The long-haired hippie kid? Alright.’”

They formed a band called AWOL and played some big gigs. They once warmed up for Sublime, they played the Costa quad, and regularly performed at a warehouse in Torrance called Velocity Studios (“Underage mayhem,” Heaney recalled) that was at the center of the local punk scene. All the other guys, which included drummer Matt Muir, graduated before Heaney and headed up to UC Santa Barbara. Heaney attended there a year later, but AWOL didn’t reform. After college, everybody was back living in the South Bay, and they decided to reform, but differently. They’d also played some Grateful Dead covers and wanted to make music more akin to that — some more laid back, acoustically-driven, mythologically-based, slightly tripped-out but always swaying tunes. Thus was born Slackstring.

The name of the band came from a song by Grateful Dead lyricist Robert Hunter, titled “Slack String Quartet,” with lyrics that included, “Tune those strings down as low as you can get/Add harp, bass, you got a slack string quartet/Barroom joy, relax and lose your face/It’s such a dump, you can’t trash the place…”

Something about Slackstring filled in an odd void in the local music scene, vibe-wise. This was before the Americana boom, and at the cusp of when the local punk scene gave way to an over-profusion of reggae. Lyman, Heaney, and Muir were all songwriters, and each had a rare gift for that rarest of all musical craft, the hook. Their music felt like sunshine at the beach. Slackstring’s debut, 2002’s “Van Album,” was aptly signified by its cover art: two palm trees, a golden sun, and VW van. The music was light on its feet, a barefoot shuffle without a cloud in the sky.

Lyman said the music came very directly from the beach.

“When you have the luxury of living in the place where we live, whether in a mansion on the Strand or shack on PCH — however dense we are, just squished together like sardines in a can — to tolerate that, we spend as much of our existence as possible at the beach, where it is pure nature, where you can unwind,” Lyman said. “And if you truly enjoy that experience, it kind of carries through…Despite the hassles associated with it, if you are here, you might as well enjoy it.” 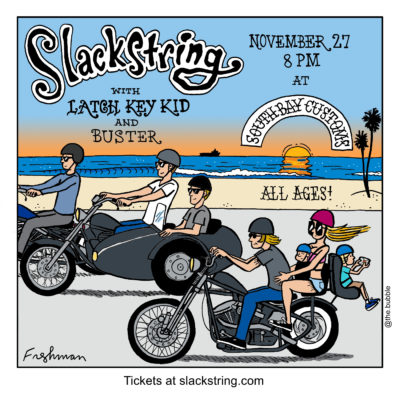 Slackstring was the sound of enjoying beach life, and it resonated pretty widely. The band toured nationally, played with the likes of The Wailers and Jack Johnson, and attracted the attention of record labels — including Ruthless Records, helmed by the notorious Jerry Heller, who famously discovered (and allegedly destroyed) N.W.A.

“He offered us a record deal, and we took it to our lawyers, and they said, ‘We can’t be your lawyers any more if you sign this,’” Heaney said, laughing. Instead, Slackstring stayed local, recording a live record in 2006 and another studio album, “Lay Back,” in 2007. Eventually, Lyman would move to Santa Barbara, and Heaney would start a new band, Latch Key Kid. Heaney remains a full-time professional musician, while other band members have moved on to other fields. Lyman expresses gratitude that Heaney keeps the groove going, while Heaney is grateful to still be playing with his old friends. He still looks up to Lyman like he did that day in the MCHS hallway.

“Lyman’s got the voice of Sam Cooke, plays guitar like Jerry Garcia, and writes songs like Robert Hunter,” he said. “He’s got serious talent. He’ll always be my idol.”

The band never really broke up, as evidenced by another record released in 2015, “Wildwood,” and their upcoming show at South Bay Customs in El Segundo Nov. 27. The current lineup features the original lineup of Heaney, Lyman, Muir, and Brett Thomas, a bass player (and Costa alum) who joined the band in 2004 (the band’s second record, “Lay Back,” was recorded at Thomas’ studio in El Porto). In keeping with their laidback musical ethos, Slackstring abides by keeping it simple. “We do it for the fun times,” Heaney said.