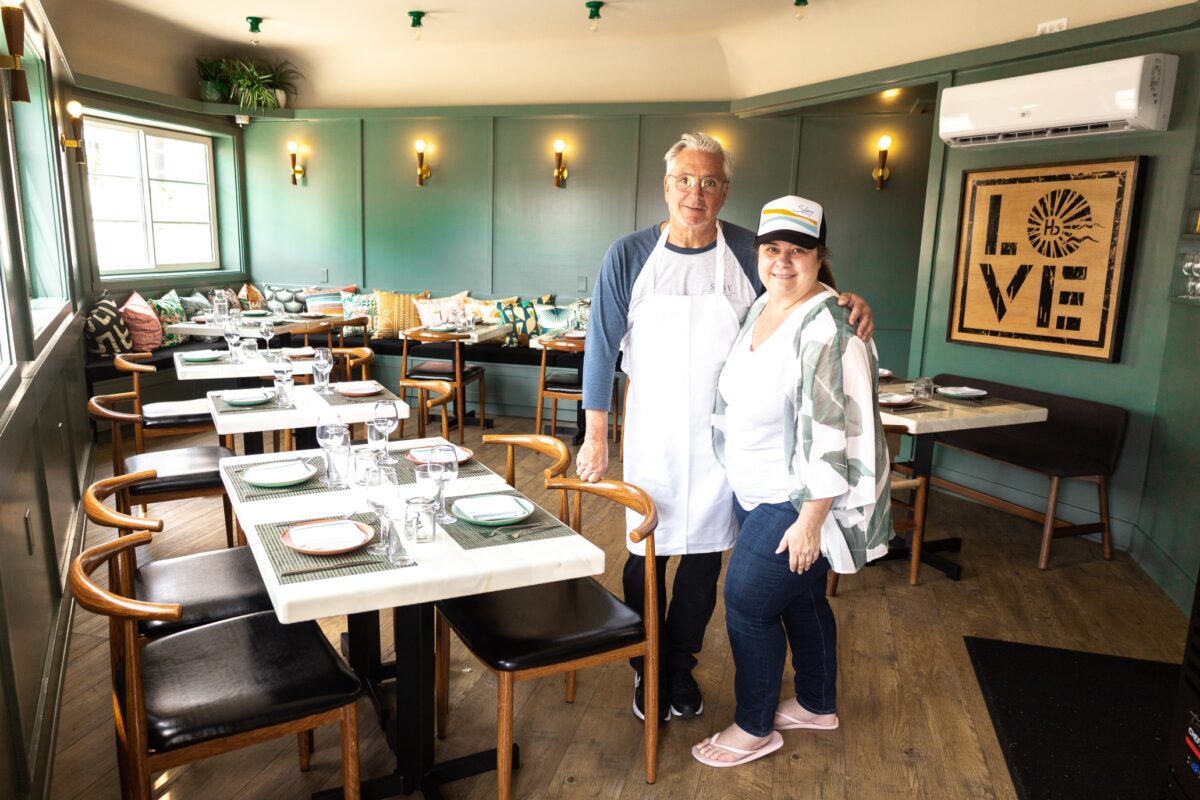 One of the defining moments in California cuisine was when Alice Waters of Chez Panisse surprised her customers with an unorthodox dessert: a plate with nothing on it but a peach. No sauce, no garnish, just a piece of fruit. In the1980s, when wild creativity was fetishized, it was daring to insist that something natural could not be improved by a chef. The news rippled across the culinary world, and chefs who had been stacking flavor upon flavor started reassessing their options.

None of the articles I’ve found about that moment mentioned how much Chez Panisse charged for that perfect peach. Customers undoubtedly didn’t quibble because they were in a temple of gastronomy at a revelatory moment, but since then it has been a problem for chefs to assert that simple things may be of high value. A modern diner might look at that dessert and calculate how many peaches very much like what could be gotten at a farmer’s market. The restaurants that are actually buying from that same market might have trouble justifying a huge markup, so those with a unique supply chain have an advantage.

As far as I know David Slay is the only local chef who actually owns a farm and sources most of his produce from it. His restaurants in Manhattan Beach have been quite successful serving Italian food, steaks, and seafood. He now has a new operation called Slay Hermosa. That menu is a bit harder to define. It includes down-market items at sometimes surprisingly high prices. One portobello mushroom for $14? A grilled cheese sandwich and fries for $21? What’s going on here, and is it worth it? 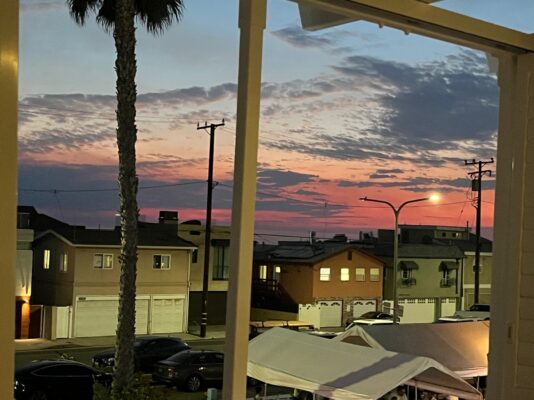 Sunset view from the upstairs patio at Slay Hermosa. Photo by Richard Foss.

The location at Hermosa Avenue and Gould used to be El Gringo. It is an odd triangle on a sliver of land, but Slay and his partners have made the most of it. The interior is cozy, but the front patio is close to the street where cars and motorcycles accelerate noisily. Service upstairs is slightly slower because servers have to navigate the steps, but the peaceful space and sunset view are ample compensation.

On two visits we’ve tried starters of bacon-wrapped scallops, yellowtail crudo, chicken drumettes, cheddar buns, and that aforementioned  portobello mushroom. Wrapping scallops, or almost anything else, in bacon is not a new idea, but glazing them with wildflower honey and mustard is novel as far as I can tell. It works. The sweetness, and sharpness are delicate accents that don’t take the stage away from the smoke and seafood richness. There are three scallops and we were a party of three, but if you have four you might ask about getting an extra. The yellowtail crudo was another seafood item that benefitted from gentle seasoning. My wife is suspicious of any raw seafood item that mentions wasabi and jalapeno because she usually finds those flavors overpowering. But the red pepper was in large pieces she could avoid and the wasabi caviar was in one corner of the dish where it could be added to taste. The fish would have been fine as sashimi, but had a little fruitiness from the olive oil that I thought worked well with the sharpness of the wasabi.

The chicken drummettes were the spiciest item of our meal thanks to a vigorously peppery dry rub, but the blue cheese aioli that came with them added unctuous coolness that soothed the tongue. I prefer dry rub hot wings to the sticky buffalo sauce variety, and these were very good. Unfortunately, the remaining two starters were puzzling. The “cheddar buns” were decent Parker House rolls that had been sprinkled with grated cheese when not particularly hot, so that it hadn’t completely melted. We expected rolls with the cheese baked into the dough, and found these unimpressive. As for the portobello mushroom starter, it was one moderately sized mushroom on a bed of a caesar salsa verde, topped with micro-greens. We had ordered this as a starter for a table of three people, so each got only one bite. It was a nice bite, but since it had cost $14 we expected a larger portion. 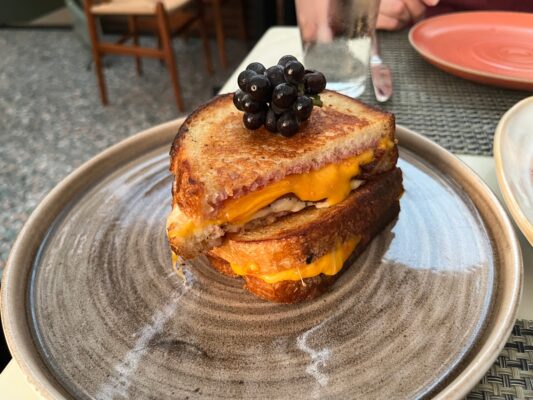 Slay’s grilled cheese sandwich may be the best, and most expensive you will ever have. I comes with fries, but ours were on a separate plate. Photo by Richard Foss

For mains we selected the filet of sole, a flatiron steak, salmon with brussels sprout succotash, a daily special of chowder, and the most expensive grilled cheese sandwich I’ve ever had, which ran $21. Shockingly, it was worth it, because it’s the best grilled cheese sandwich I’ve ever had. Between the large slices of crusty bread were separate layers of Havarti and cheddar, with pepper bacon and a jam that included both pinot grapes and Calabrian pepper. The flavors were complex and just kept coming, sweetness with hints of red and black pepper, smokiness, dairy richness, and umami underlying it all. Get this as a meal or to share as a starter for four, and you will not regret it.

You won’t regret the flavors of the sole or the flatiron steak either, though both had the same problem of being exuberantly sauced. I had ordered the flatiron partly because the menu mentioned blue cheese and toasted rosemary, and peppercorns, but did not mention plenty of rich stock gravy. That would have been okay if this hadn’t been served on top of the french fries, making them soggy instead of crisp. It was a fine steak and the toasted rosemary was a nice touch, though I’d have preferred cracked pepper to peppercorns. Ask for the sauce on the side and the fries next to the steak rather than under it if you prefer crisp fries, or don’t if you like them that way.

Similarly, the sole was a large and properly cooked piece of fish that had too much herb butter – if it had been on the side so that we could enjoy the fish with just as much as we wanted, it would have been perfect. It was offered with roasted broccoli or green beans and we chose the broccoli. Like most of the vegetables here it was from Slay’s own farm, and presented simply as a contrast to the richer fish. 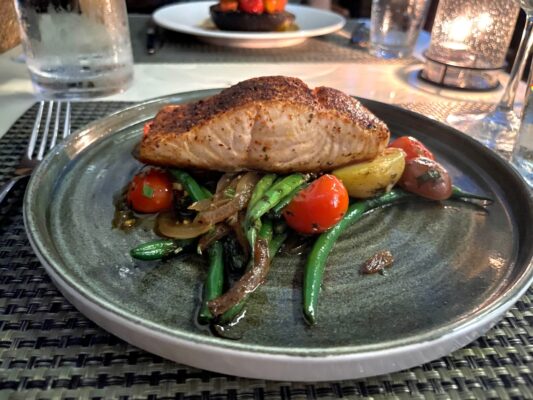 The salmon entree at Slay Hermosa. Photo by Richard Foss.

The seafood chowder special was a standard item very well made, with lots of fish and shellfish, the creamy stock, rich with butter and herbs, and lightly peppery. The star of the seafood items, though, was the salmon, which arrived over roasted red potatoes with green beans, grilled sweet onion, and roasted tomatoes. It was a fine piece of fish with slightly peppery seasoning, but it was the vegetables that made the dish. These were the flavors of summer with just a little seasoning, and they complemented the oily salmon perfectly.

The wine list has many good bottles and a few good by-the-glass selections, but is priced somewhat high – the least expensive bottle on the menu is $60. While the Fume Blanc from Slay’s own vineyard was very good, it’s possible to find respectable bottles for less to please the cost conscious.

We tried three desserts: a butterscotch pot de creme, lemon tart parfait, and a chocolate mousse bombe. The pot de creme was a surprise because I usually don’t like butterscotch and did like this – it was very rich but light and not overly sweet. I was a fan of the bombe too, because I’m a sucker for rich dark chocolate with an espresso creme anglaise. The parfait wasn’t to my taste because the menu had mentioned vanilla bean ice cream and berry sauce, but not the toasted marshmallow topping that I thought skewed it a bit too sweet.

Dinner at Slay Hermosa is an enjoyable experience, and while we found some dishes uneven, the service on both visits was very good. The restaurant has only been open for a few months and may still be evolving, but the ideas behind the cooking are sound. Their location away from the tourist trade will make this a locals’ hideaway, though the lack of parking may make things difficult on summer weekends. Those who appreciate a focus on freshness with a few excursions into baroque flavors (I’m thinking of that grilled cheese sandwich again) will want to stop in.