Soom Soom So So [restaurant review]

The new Israeli restaurant in Plaza El Segundo has promise, but needs some fixing 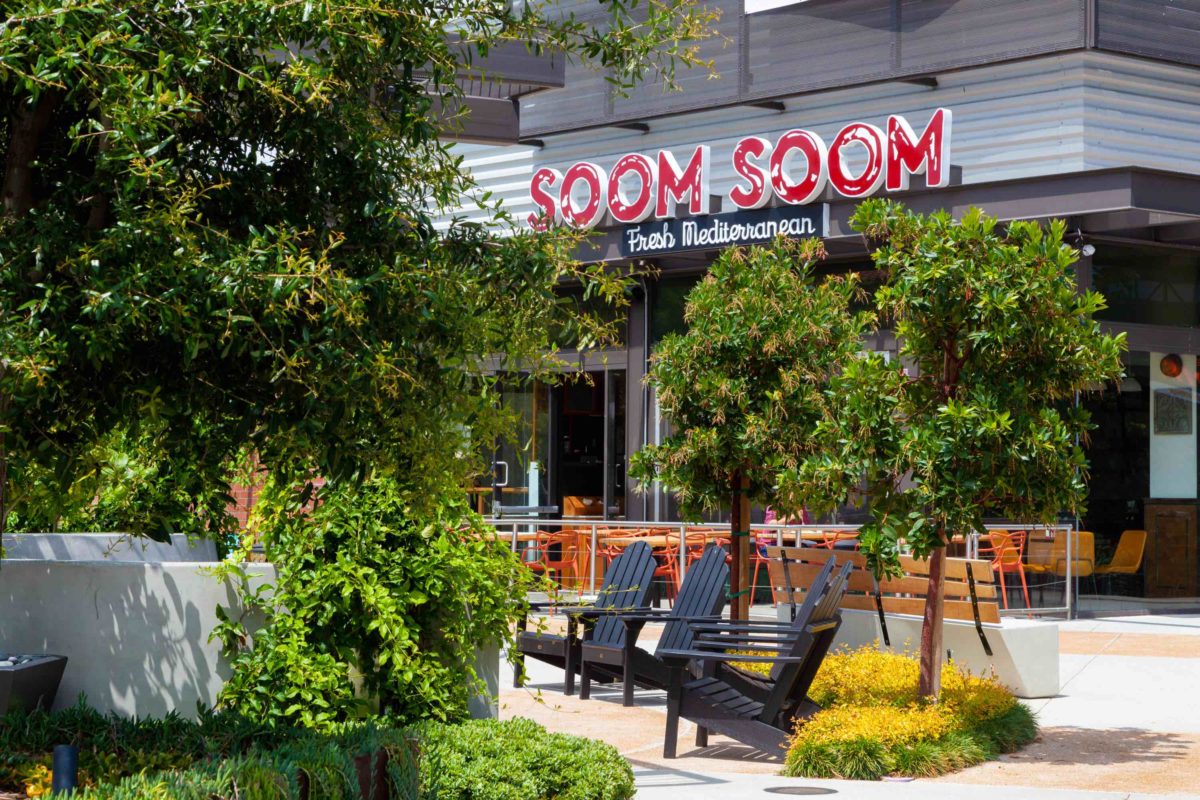 The lines on a global map change occasionally, the names more frequently, but the cultures generally evolve at glacial speed. When Czechoslovakia separated into two countries in 1992 it didn’t change traditional dance, literature or cooking. (The Slovaks did have to learn a new national anthem, but many probably just move their lips when it’s played, like people here when confronted with the second verse of the Star Spangled Banner.)

Israel is one of the rare instances of a new country that quickly spawned a new culture, including language, cuisine, dance, and just about everything else. The speedy influx of people from all over the world forced a merger of European influences with Arabic and Semitic traditions. American Kosher hot dogs and pastrami, Polish marinated fish and sauerkraut, and Moroccan couscous and sausages were integrated into Middle Eastern cuisine to create something new and volatile.

There are many Israeli restaurants in the San Fernando Valley and elsewhere around LA, but until now the South Bay hasn’t had one. This changed with the opening of Soom Soom (sesame in Hebrew) in Plaza El Segundo, just east of Whole Foods on Pacific Coast Highway. It’s the sixth location for the chainlet, taking the spot vacated by an Indian vegetarian restaurant. The bright, modern cafe operates on the quick serve model. Customers  order and pay at the counter, and most of the food is served by the staff from buffet trays as you make your choices.

That service model is exactly what doesn’t work here, despite food that has some high points. The menu is unusually uninformative despite the fact that they serve a cuisine that will be unfamiliar to almost everyone who comes through the door. For instance, one of their specialties is sabich, a mix of fried eggplant, hard-boiled egg, pickles, and hummus. This is listed by name with no explanation. One of the women working there said she has to explain it to every new customer. This problem is multiplied because they also offer sides that are unlabeled. There are two cucumber salads with different spicing, some mild pickles and some that are very pungent.Customers are called upon to decide what they want with no guidance except counter staff, who obviously haven’t been given sufficient details about what they’re serving. It would take a matter of moments to print labels so those with dietary restrictions could make informed choices, but management hasn’t done that. As a result, service is slow despite the staff’s best efforts. Soom Soom has tried to speed up service by having some items pre-cooked and ready to serve, with results that are at best mixed, but more about that later.

I visited on a recent weekday evening with friends who are fairly knowledgeable about this cuisine, and we ordered several side dishes as well as our plates, combos, and wraps. Since the sign outside boasts that they serve the best falafel and shawarma in town, we made sure to order both. I was pleased to note that unlike some other fried items the falafels are made to order. They were the last item to arrive at our table and worth the wait. They had a fragrant but not overwhelming blend of spices and a near-perfect texture, crisp outside but moist within.

Unfortunately two other items, the fried eggplant and roasted cauliflower, had been sitting on the buffet table and were barely warm. I had noticed how wilted they looked in the buffet and had asked for some to be fried fresh, but they refused to do it. The cauliflower was barely tolerable, and the eggplant veered near the line into inedible. The decision to have this on the buffet in the first place was strange, because it takes much less time to fry eggplant than it does to make falafels, and eggplant goes soggy faster.

The other starter we ordered, stuffed grape leaves, were edible but mediocre. The rice was mushy, the spices barely evident, and though they were small we didn’t finish them.

I always order hummus at Middle Eastern places and Zoom Zoom’s was very good, with a rich, creamy texture, but it was served in a small, deep container rather than a bowl that would allow us to easily access it. Our server also forgot to give us bread.  When we reminded her of this she gave us two pieces. We were glad she did, because serving only one piece of pita with a large amount of hummus would have been insufficient. It’s good hummus and worth ordering, but if you get it ask for extra bread. The pita is above average, thick and fluffy, and you’ll want every bit of it. 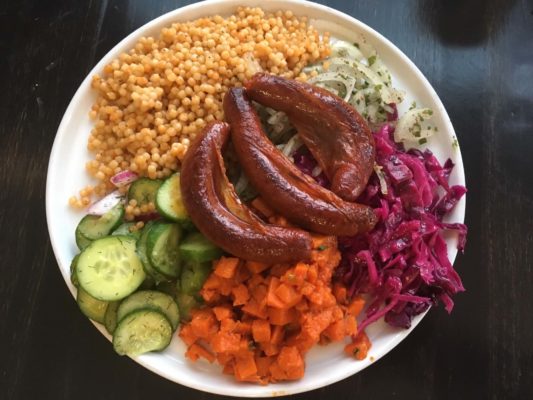 We had ordered a chicken shawarma wrap, merguez sausage and grilled chicken plates, and a sabich salad, and found them to be uneven. The Moroccan-seasoned beef sausages were a bit undercooked but did have the authentic spicing, with cumin and red pepper giving quite a kick. I’d get them in a wrap with some of the spicy cabbage salad or sauerkraut and marinated grilled onions for a lunch that would wake up my mouth. The shawarma was unfortunately not up to par, quite dry and lacking the seasoning and texture that make this spit-grilled meat distinctive. The sabich might have been good but was sabotaged by the cold eggplant, and the grilled chicken was ordinary grilled chicken.

To accompany this there were three house made drinks, sweet strawberry or mango lemonade and sweetened tea. It’s a strange decision to offer no items that aren’t sugary other than water and canned sodas, given that many people are trying to drink fresh juices. Three of us had water, the other a canned cola.

The final item we tried was their baklava, and I must admit that we did so with no great enthusiasm based on our meal so far. Surprise, it was unusually good, not overly sweet with a good balance of nuts and spices and fine flaky pastry.

Dinner for four ran $82. We left Soom Soom frustrated by the high potential of the place that was so undermined by bad execution. Every problem they have is fixable, if the management decides to fix it. Unless and until they do, I’m sticking with the hummus and falafel, because those are first rate.