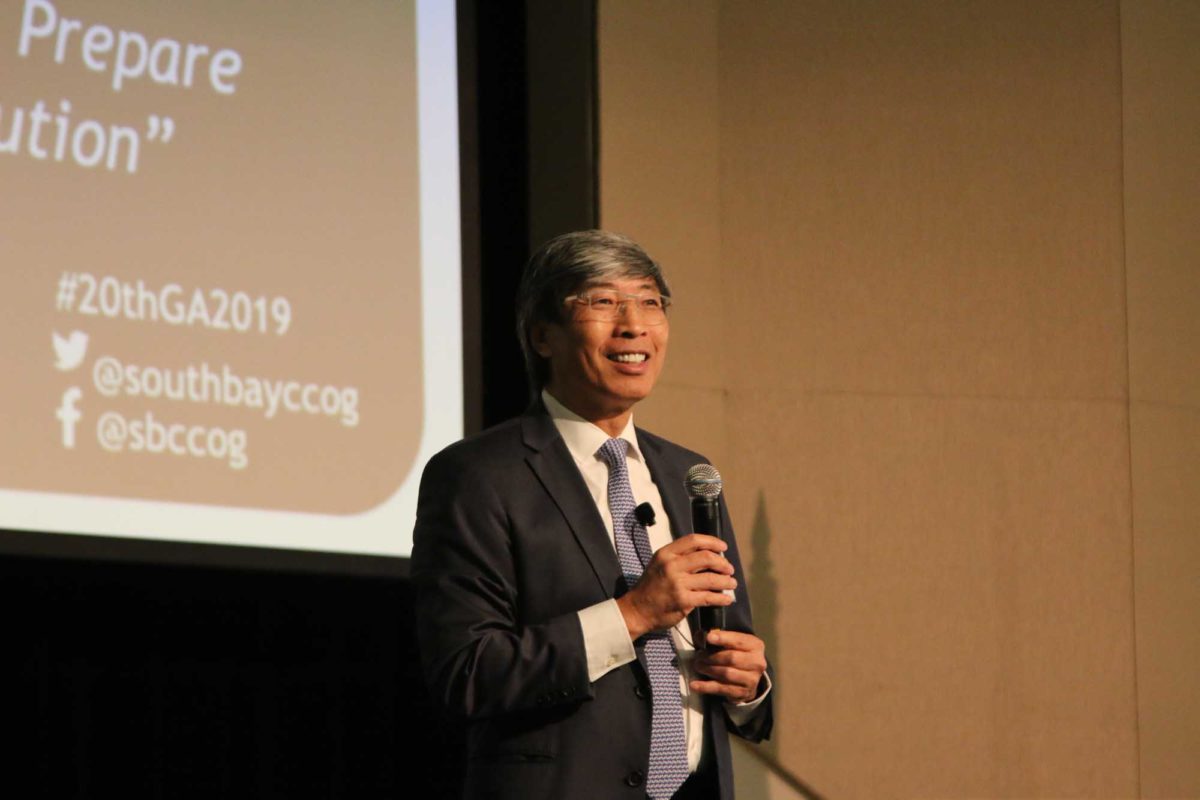 Dr. Patrick Soon-Shiong is a surgeon, philanthropist, entrepreneur and as of last year, the chairman of the Los Angeles Times. Last Thursday, he became a rockstar among South Bay government policy wonks.

Soon-Shiong was the keynote speaker at the 20th Annual South Bay Cities Council of Governments General Assembly, themed “Celebrating the Past — Shaping our Future.” The SBCCOG’s annual one-day conference brings together leadership from each of its member communities, including unincorporated LA County communities and 16 member cities.

“It’s amazing to stand next to this individual. In the four minutes we were watching [a Southern California Edison presentation], he fired off about half a dozen ideas he’s going to do in El Segundo, and how he can help Edison,” said El Segundo Mayor Drew Boyles. “His pace is unbelievable…our tagline is that we’re where big ideas take off, and this individual is a perfect example.”

“These are some of the existential things that are really impactful for us, to you, your children, grandchildren: cancer, infectious disease,” Soon-Shiong said. “When we talk about climate change, don’t think this is going to happen in 2, 3, 4, 5 generations, but that it’s going to affect your grandchildren…if we don’t get a 2 degree centigrade reduction in the next 10, 15, 20, 30 years, we’ll truly have an existential crisis.”

“There’s no point in curing cancer if we’re going to be dead,” Soon-Shiong said.

That said, he continues to focus on combating hydrocarbons by developing a new renewable organic polymer he believes will replace plastics.

But there was a theme: as Soon-Shiong discussed each topic, he said that each new facility was going to be built in El Segundo.

Each new facility but one. He announced that his company recently acquired five acres of land in Redondo Beach. Soon-Shiong’s representatives at the SBCCOG event declined to state exactly where the acquisition is located.

“It requires scale and energy storage, the systems, the ability to replace plastics,” Soon-Shiong said in an interview after the presentation. “If we can work with the local community to change this hydrocarbon debt that we’re putting into the world, and scale and upscale it to the rest of the world, I should be doing it in my backyard.”

As Soon-Shiong detailed his plans for expansion, city officials from across the South Bay salivated.

“I represent Hawthorne, which is next to El Segundo. We’ve got a mall that’s vacant [and] a hospital that’s been closed down for 15 or more years, and I’d like you to take a look at that,” said Hawthorne Councilman Mike Talleda, to the pronounced laughter of the audience.

After the presentation, Soon-Shiong was inundated with pitches and requests for selfies by elected officials and audience members. Afterward, he laughed while recalling the warm reception he received, including calls for an encore when he reached his time limit.

“I think, having the opportunity to take a very confined community like this in the South Bay, I’m pleased with the reception they gave for all of this very complex information I was getting out there,” Soon-Shiong said.